Summertime! In the northern hemisphere, it is hot hot hot. In the southern hemisphere, not so much. Here at the Byrne-ing News, we are byrne-ing up with updates on Gabriel’s new films, projects in the works, and some archival nuggets, too. Grab a drink and a snack, sit back, and catch up on the doings of our favorite Irishman. No idea where he is at the moment, but we hope he is hanging out by the pool somewhere, relaxing! Happy Summer to Byrneholics Everywhere! smile

There are several articles here at the Byrneholics website about Gabriel’s new film Hereditary. Check them out for pics, reviews, trailers, and more.

Director Daniel Adams continues to share behind-the-scenes shots and other images from the making of his new film–and we thank him! An L. A. Minute will hit screens in the US on August 24.

I hate reading about myself, but it is part of the job… wink

Mad To Be Normal on VOD and streaming 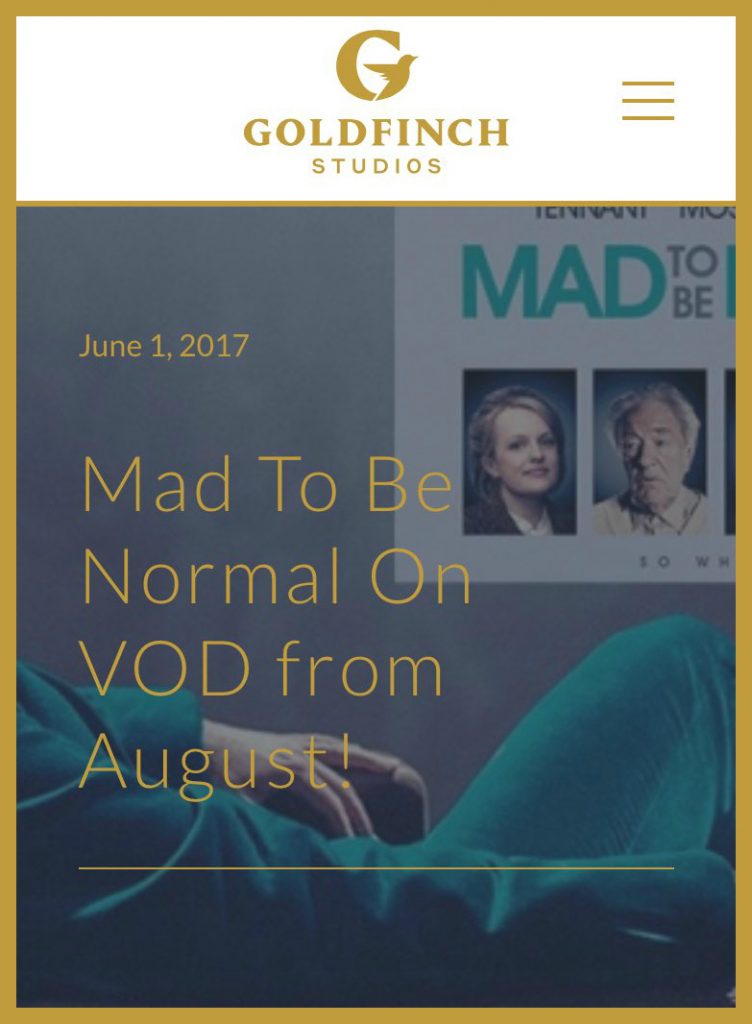 In the UK, the film becomes available via video on demand (VOD) August 13. Yay!

In the US, the film is already available for streaming from many different providers:

Check out the official film webpage for more information.

Here’s the trailer. See the film!

From what I can determine, filming for this new project will take place in Montreal and in the west of Ireland in Fall, 2018.

Here’s a good background article from RTÉ to jog your memory about this very intriguing and original film!

Speaking to The Sunday Times, Irish producer Martina Niland (The Young Offenders, Sing Street, Once) said that although the film had taken shape in Canada, Byrne was always in the frame to play the lead role.

“The majority of it will be [filmed] in Montreal,” she said. “This Irish poetry professor finds out he has this terminal illness and comes back to where he’s from on the west coast of Ireland.”

“A lot of the action then plays out here in Ireland,” Niland continued.

And I’m thinking that Gabriel is looking a little thinner than usual in preparation for playing this role. Either that or he needs to stop traveling, settle down with his family, and get fattened up a bit! Yes, there’s a Jewish mother hiding in me. I admit it. wink 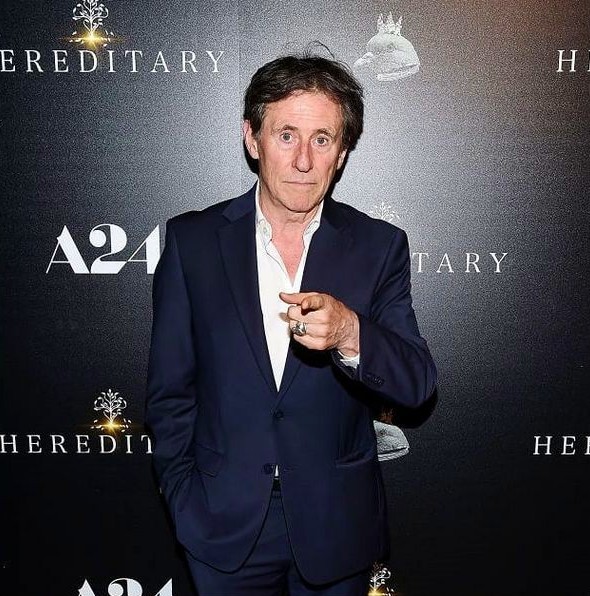 A Google Translation of an article in the Italian online magazine ANSA:

(ANSA) – ROME, 6 JULY – After New Orleans, Monterrey and Mexico City, the ZeroZeroZero troupe – one of the most important production series in Europe (Sky Italia, Canal +, Amazon, Sky Germany, Sky UK and Studio Canal) – has returned to Calabria and is about to turn to San Luca. Eight episodes on the business of cocaine from the novel-investigation of (Roberto) Saviano. Stefano Sollima (the series Romanzo Criminale and Gomorra, Suburra and Soldado with Benicio del Toro, expected in theaters) said he was “very happy with the start of work in San Luca: meeting young people who love cinema and want to live in legality and freedom.”

Riccardo Tozzi of Cattleya, who produces the series, emphasizes: “The welcoming of the municipality of the associations and citizens in San Luca was really warm, and it is a very positive sign, even beyond the series. Organized crime does not generalize, never leave the specific and clearly distinguish the increasingly important part of society that refuses and rejects it.”

And another source notes:

The series could be among the flagship jewels of the upcoming Sky TV season along with Gomorra, and more. The production should finish in the fall and then it will go to the editing but ZeroZeroZero could go on the air even next spring.

I think Gabriel’s work on this series is complete, but I’m not sure. He was in New Orleans and also in Mexico in Spring 2018. Filming has moved to Europe, in Calabria, Italy, to be precise, but he has not. So, now we wait for the series to finish up and become available at Amazon sometime in 2019, hopefully in the spring.

The director of this series, Stefano Sollima, has a new film out, Sicario: Day of the Soldado, with Gabriel’s colleague Benicio del Toro, and I know fans of the first Sicario are looking forward to this sequel. We hope this new series Sollima is directing gets the same warm welcome.

Bonus point: In which film did Gabriel and Benicio appear together? And what was the name of Benicio’s character? Share your answers in the Comments!

Unless this film has already produced itself, it is going to have to wait awhile. One of its stars is on stage until November:

Oh, what we would give to head across the pond and experience this. A great cast for a great play. Heaven.

In this interview at Independent.ie, Ms. George celebrates her new film, Don’t Go, which is having its world premiere at the Galway Film Fleadh in July. She covers a wide range of topics, including a little walk down memory lane. 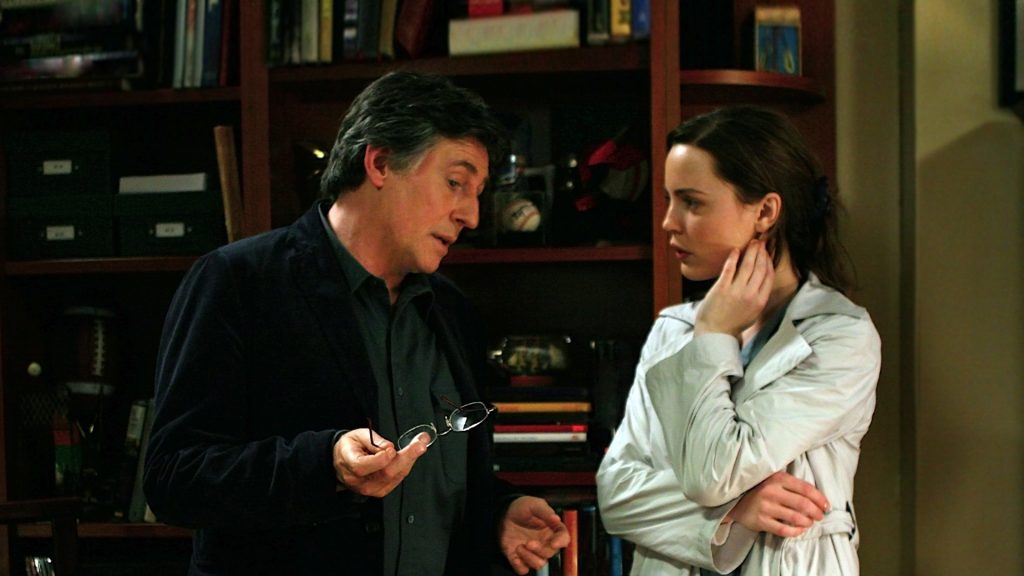 It has been ten years since Melissa bagged a Golden Globe for her performance in HBO’s critically acclaimed series In Treatment opposite our own Gabriel Byrne. He played a psychologist, she played one of his patients. The mere mention of his name elicits an outpouring of affection.

“Best actor ever,” she declares. “He’s the best. I honestly, if I wasn’t married [at the time she was married to Claudio Dabed], I would marry him! I would marry the man! I was looking at Gabriel Byrne in front of me going, oh my gosh, the most handsome Irish man that ever existed.”

She continues, “Obviously, creatively to just sit there and do two full days for each patient session and to be able to do that kind of work with an actor like Gabriel… and we all came out of that such better actors and such better people. It was exceptional. In fact I think it’s downhill from there.”

And we agree, don’t we? Good fortune to you, Melissa George, and break a leg with this new film!

In 2007, the National University of Ireland Galway conferred to Gabriel Byrne the honorary degree of Doctor of Arts. This past year, while visiting Galway, he stopped by to talk about careers in the creative arts, as only he can. This brief video is packed with ideas, so enjoy.

Video archeology has turned up this bit of history about Gabriel’s documentary, directed by Pat Collins in 2008: Stories From Home.

If Stories From Home is ever released, on DVD, streaming, or carrier pigeon, I will let you know. It has been ten years, so hope is waning. But we never give up, do we?! No.

I can report that I have begun work on a Mega Movie Page for this film, so that should help a bit.

Did you know that there are people in the world who really LIKE this movie!?

Sometime in the past two months or so, the Gallery hit the 1 Million Views mark!

The Gallery counter currently stands at 1,028,952 views of a collection of 10,299 image files. That’s a lot of Gabriel Byrne pictures and a lot of fans looking at them. So wonderful to see these numbers.

New pics, including screencaps for Gabriel’s movies, are always being added to the Gallery, so be sure to visit often! 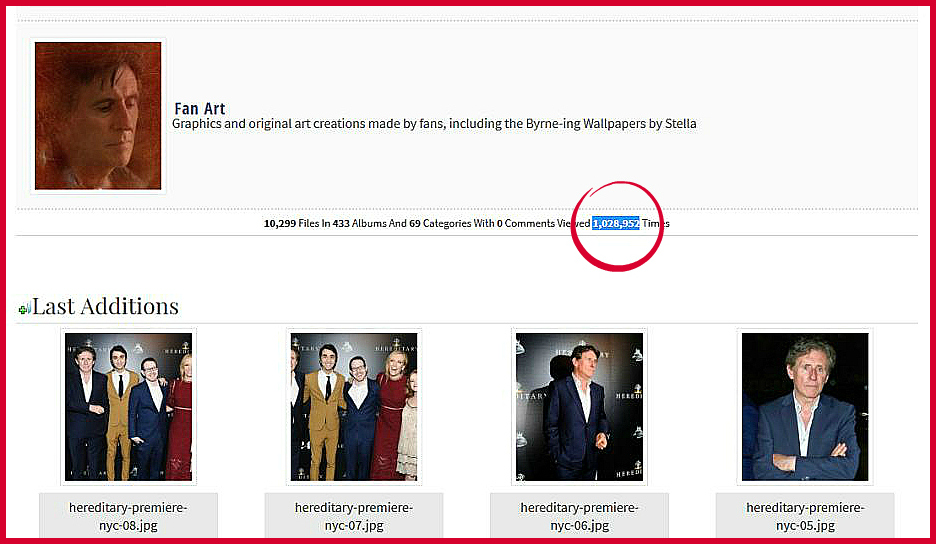 And that’s the summertime news for Gabriel Byrne. Remember: Hereditary is out now and An L. A. Minute will hit screens in late August. More films are in the pipeline. And you never know where Mr. Byrne will pop up next, so stay tuned!

Here’s a summertime wallpaper reward for making it to the end of this Byrne-ing News. Enjoy! wink 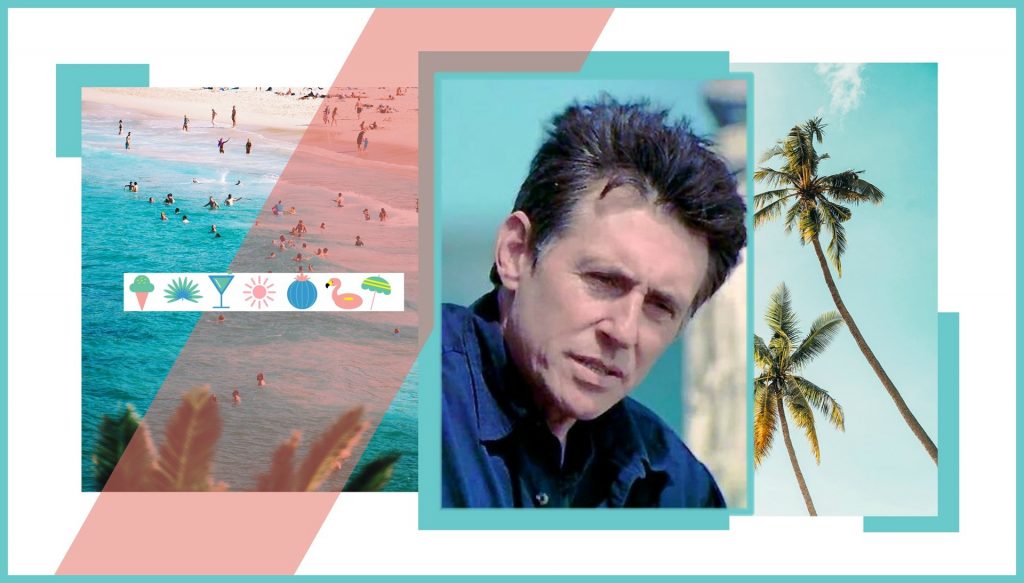 I am here to make your desktop happy. Download me!