One of my favorite online literary haunts is Lithub. It is like a cozy but very busy bookstore, full of smart and pleasant people who are happy to tell you what to read, what not to read (unless you really, really want to), what’s coming up to read next, and what’s the best stuff from the past to read.

They also tell you about books that are being adapted for the screen, so sometimes you get exciting notices like this one, from November 5:

That box is packed with good news, but the very first thing is the best thing! You can read more here about Gabriel Byrne’s new Beckettian adventure, entitled Dance First, and soon there will be a Projects Page for it on the homepage. This is going to be very special, so stay tuned for news!

Get all of the wonderful details on this new release coming in February, 2022.

And don’t forget to pre-order it, because there is a NEW interview with Gabriel Byrne and John Turturro included on the Blu-ray that will not be available anywhere else! Lucky Megan Abbott, to have spent time talking with these two gentlemen in the studio. And lucky them, to have this great writer and showrunner as an interviewer. Now we should all be lucky and get our hands on this shiny new Blu-ray!

In case you missed the lovely pics she shared on Twitter:

Walking With Ghosts is out in paperback in UK and USA now!

I’m a Kindle girl myself, but I purchased a hardback copy of Gabriel Byrne’s new book, and I’ll be getting this new paperback, too. You cannot have too many versions of Walking With Ghosts, I say. You never know when or where you might want to read it! And for all you audiobook fans out there, Gabriel narrates his book himself. Yummy.

Get the UK paperback here.

Get the US paperback here.

Mark your calendars for December 10 for this year’s Annual Spirit of Ireland Gala!

One of the special guests in attendance will be Gabriel Byrne, long-time advocate and ambassador for the Irish Arts Center in New York City. You just know that being there, that night, will be so special after all these years of fund-raising, tour-giving, and activism. What a job! And now, it’s done. Time to celebrate!

Heads up, Bracken Fans! Thanks to Bracken Fan Aidan, I now have all 12 episodes of Gabriel’s Irish television series, complete, in order, and without ads.

I have to convert them to a format that will work on YouTube, so once that is done, I’ll announce their availability.

What a great gift! Thanks, Aidan! heart

War of the Worlds Season 2 in Canada is almost done!

Canadian fans of the series tell me that the Season 2 Finale is this week, so that’s it for Bill Ward and Crew for the time being. What a season it was, too! Be sure to catch up on all of my Season 2 spoiler-free episode postings–I hear from more than one Byrneholic that I can be pretty funny when I’m scared out of my wits and worried about the fate of humanity!

The wait for Season 3 has begun.

There are several black and white pics from the set of this film. This is a recently discovered one.

Just A Sigh screened in 2013 and Byrneholics everywhere fainted. I’m not sure we’ve ever recovered.

How did I miss this? Sharp-eyed Byrneholics Facebook Administrator Violetta shared this lovely memory provided by Sibylla Deen, from the set of Lies We Tell, which was shot back in 2015 in Yorkshire, England. The owl is a stand-in. And so cute!

And I missed this horror story about Gabriel and the rats, the perfect story for Halloween, darn it! This is from the Independent.ie interview with Mr. Byrne on the publication of his new book, Walking With Ghosts.

If ever you thought acting was easy, or romantic, or fun, well–it probably can be, but then there are the rats!

Blasts from the Past

Ben Brantley, theater critic for the New York Times, on A Moon for the Misbegotten

Reactions to the new channel were positive, with one viewer saying “Our language has finally been seen on a TV screen”. And on the opening night, Gabriel Byrne, who starred in the new film Draíocht which aired that night, said:

“When you lose a language, you lose something that’s far more valuable than just words, so when I heard that TnaG were starting up I thought, well I’ll do this with them. Plus, I think the language itself is a beautiful, complex, intricate language and it’s extremely expressive.”

Since then, the television channel – which rebranded to TG4 in 1999 – has gone from strength-to-strength, with over one and a quarter million people tuning in each week. In fact, TG4 has been the 6th most-watched channel in Ireland in 2019 and in 2020, the highest position achieved since it was launched.

Read more about the film Gabriel Byrne wrote and starred in: Draíocht.

People ask me why I spend time on Twitter. Well, see above, for one thing.

Also, I have a lofty response about engaging with Gabriel Fans and interacting with people who work in the movies and reading what the writers I enjoy have to say and also discovering the news and events of the day and and and . . .

Lovely surprises like this screencap of Gabriel Byrne from his film Shipwrecked suddenly appear in my timeline and make me forget why I even came to Twitter that day . . . wink

Here, in all of his autumnal glory over the years, is Mr. Byrne, looking by turns fiery, fervent, and pensive. Load these wallpapers up and bring Fall to your desktop!

Thanks for reading this Byrne-ing News all the way to the end. You are a true Byrneholic and I appreciate that!

Now, enjoy the end of Autumn and get ready for The Holidays! heart 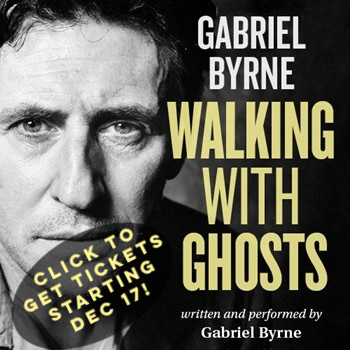