Founded in 1972, Irish Arts Center is a New York-based arts and cultural center dedicated to projecting a dynamic image of Ireland and Irish America for the 21st century, building community with artists and audiences of all backgrounds, forging and strengthening cross-cultural partnerships, and preserving the evolving stories and traditions of Irish culture for generations to come.

Our multi-disciplinary programming is centered around three core areas: performance – including live music, dance, theatre, film, literature, and the humanities; exhibition – including visual arts presentations and cultural exhibitions that tell the evolving Irish story; and education – with dozens of classes per week in Irish language, history, music, and dance. 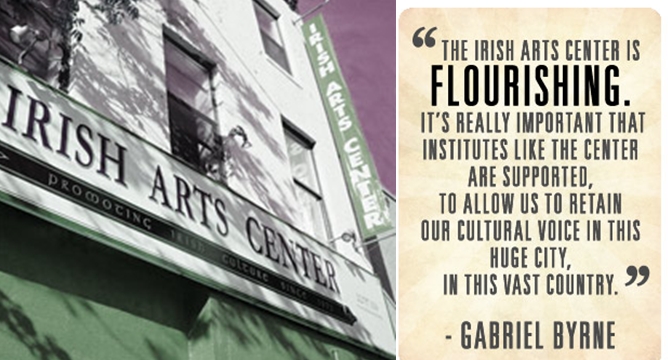 Mr. Byrne is actively supporting the new building program, as well as the existing programs of the Center.

New York-based Gabriel Byrne has appealed for support for “the simple and transformational changes” taking place in Irish hospitals aimed at making death more bearable for those at end of life and for family and friends left behind. The work is being spearheaded by the Irish Hospice Foundation (IHF), the national charity which is dedicated to all matters related to dying, death and bereavement in Ireland.

You can read more about this event at the Byrneholics posting.

The primary way to support this new initiative is the new book, The Gathering – Reflections on Ireland.

Ireland is a nation of story-tellers, and a talent for narrative is part of our heritage.  The Gathering – Reflections on Ireland is a unique celebration of that heritage, bringing together stories and photographs from Gathering events, as well as reflections and recollections from a range of contributors.

You can read more about and purchase the book at the IHF website, with shipping inside and outside of Ireland available. All proceeds benefit Mr. Byrne’s project, Design and Dignity.

The Irish Hospice Foundation supports the development of hospice care and promotes the hospice philosophy.

* Hospice care is the specialised care of people with life-limiting illness.
* The hospice philosophy is based on the principle of wholeness, expressed in many ways – for example, it gives equal emphasis to the physical, emotional, social and spiritual well-being of the patient. The hospice philosophy takes as its starting point that death is a natural part of life; that dying is an integral life experience.

Our aim is to facilitate the practice of hospice care in all its aspects. We do this by working independently as well as in partnership with the statutory, voluntary and professional bodies concerned with hospice and palliative care in Ireland. (from the official website)

The Forum on End of Life in Ireland sponsored by the Irish Hospice Foundation was a particular focus for Gabriel Byrne. He serves as the Forum’s Patron. “The Forum on End of Life in Ireland seeks to develop a vision of how modern Ireland can address the challenges of dying, death and bereavement. It offers an opportunity for organisations and the general public to discuss the issues they believe are crucial at the end of life.” (from the official website, which is no longer available on the Internet)

Gabriel Byrne was appointed the first Cultural Ambassador for Ireland by Taoiseach Brian Cowen at the St. Patrick’s Day festivities in Washington, DC on March 16, 2010. He will be working “…closely with the Government and artistic bodies to develop “an artistic vision” that is inclusive of the Irish diaspora throughout the world….His role will include the creation of a programme of art, ideas, debate and reflection to help foster a renewed cultural relationship between Ireland and America” (quoting from the Irish Times). Mr. Byrne served in this capacity for two years. 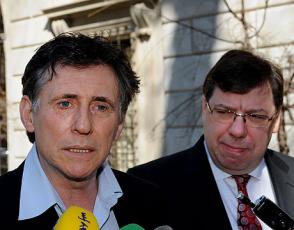 Gabriel Byrne was appointed a UNICEF Ireland Ambassador in November 2004. He is particularly interested in helping UNICEF Ireland highlight the plight of children whose lives have been devastated by HIV/AIDS. Gabriel recently held an Exhibition of his own Photographs in aid of UNICEF in New York and was the very special guest at the 2006 Mother’s Day Lunch.

Gabriel Byrne is a well-known Human Rights activist and was deeply involved with getting Art for Amnesty’s Imagine campaign running. In fact, it was his inspiration, after hearing his niece’s school choir perform Imagine, that led Amnesty International’s USA office to approach Yoko Ono with the idea for the campaign.  (from the Amnesty International website) 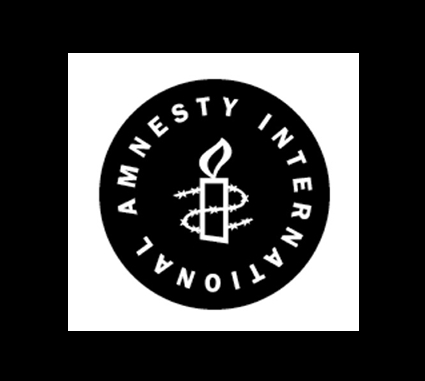 Croí is a registered Irish heart & stroke charity dedicated to the fight against heart disease and stroke, with a special focus on the West of Ireland. Our Mission is to ‘Prevent Disease, Save Lives, Promote Recovery and Wellbeing.’ The charity is totally funded through the proceeds of fundraising events, voluntary contributions and philanthropy. (from the official website)