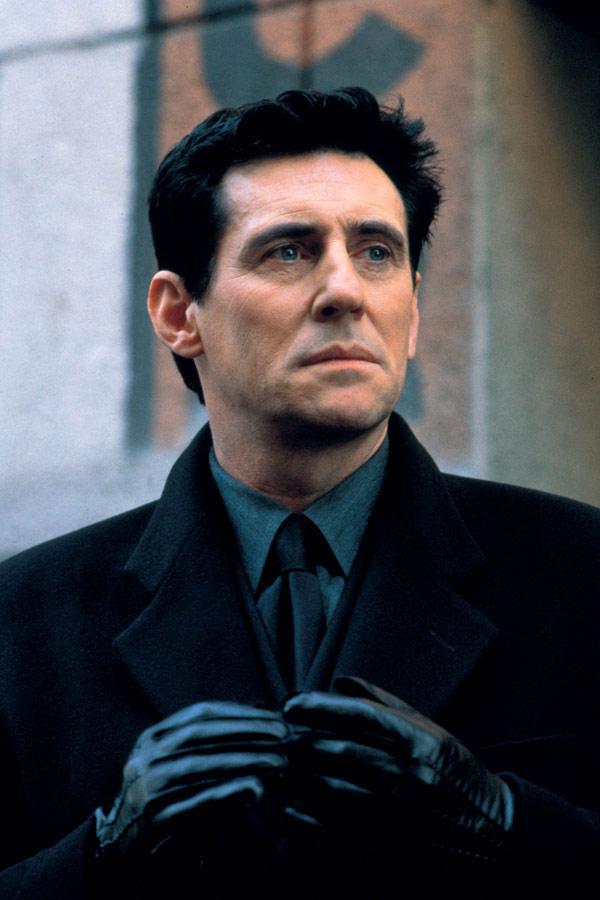 Directed by and cinematography by Peter Hyams; written by Andrew W. Marlowe

Received mostly negative reviews, with a score of 11% approvals on Rotten Tomatoes and a 33 at Metacritic

The end is near.

When the thousand years are expired, Satan shall be loosed out of his prison.

Prepare for the end of days.

On the eve of the millenium an ex-cop torn by loss must regain his faith in order to quell the end of days.

You will bear witness to the End of Days…

1999 proved a banner year for screen portrayals of Satan’s love life: first his relationship with Saddam Hussein went under the microscope in South Park: Bigger, Longer and Uncut, and a few months later his search for a girl to settle down with became the basis of this thriller. With the millennium approaching, a series of disturbing signs suggests that Satan (here played by Gabriel Byrne) has returned to Earth and is walking the streets of New York City. It seems that Satan needs to find a woman who will bear his child, as the time for the arrival of the anti-Christ draws near. A woman named Christine (Robin Tunney) believes that she has seen the Devil and felt his presence, and it’s up to Jericho Cane (Arnold Schwarzenegger), a former policeman turned elite bodyguard, to keep her safe from The Dark Lord. End of Days was both directed and photographed by Peter Hyams; Kevin Pollak, Renee Olstead, and Udo Kier are among the supporting cast. —Mark Deming, Allrovi.com 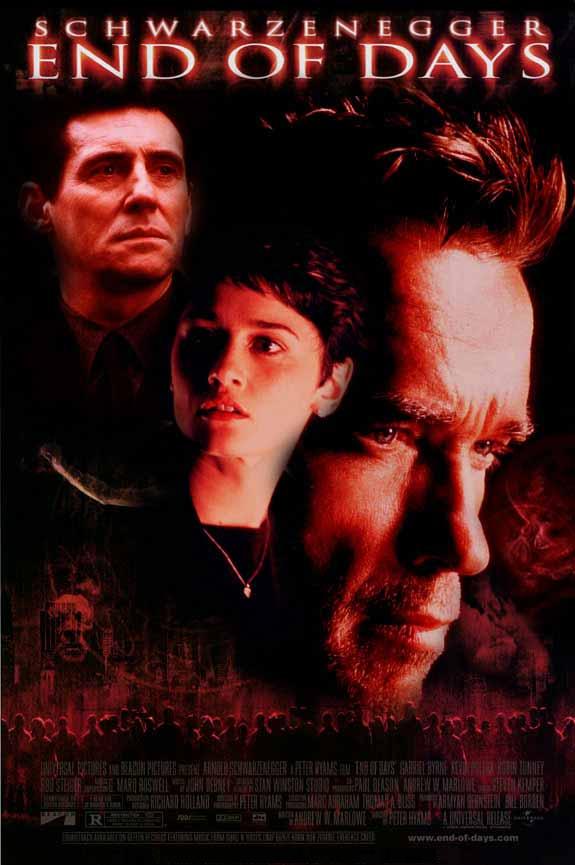 More official posters for the film are in the Gallery. 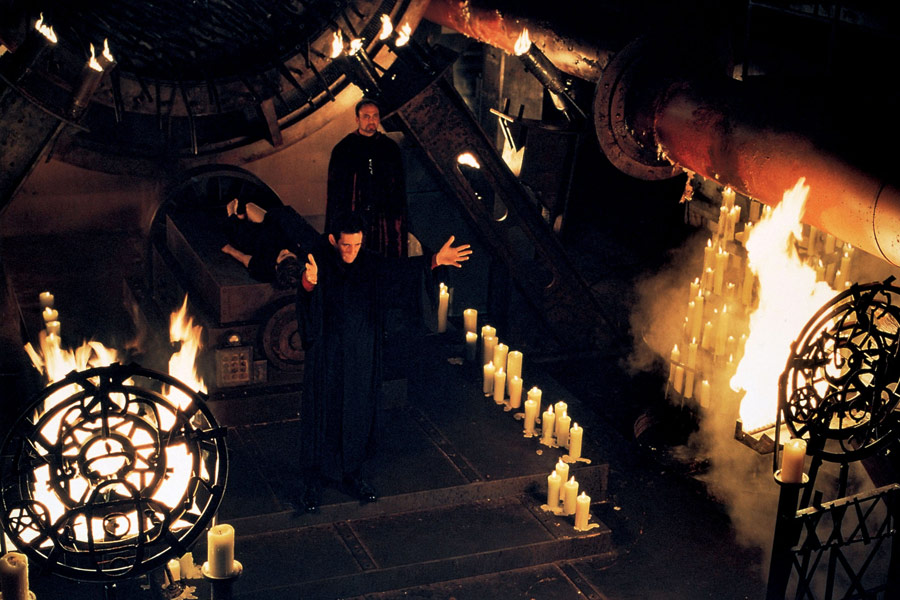 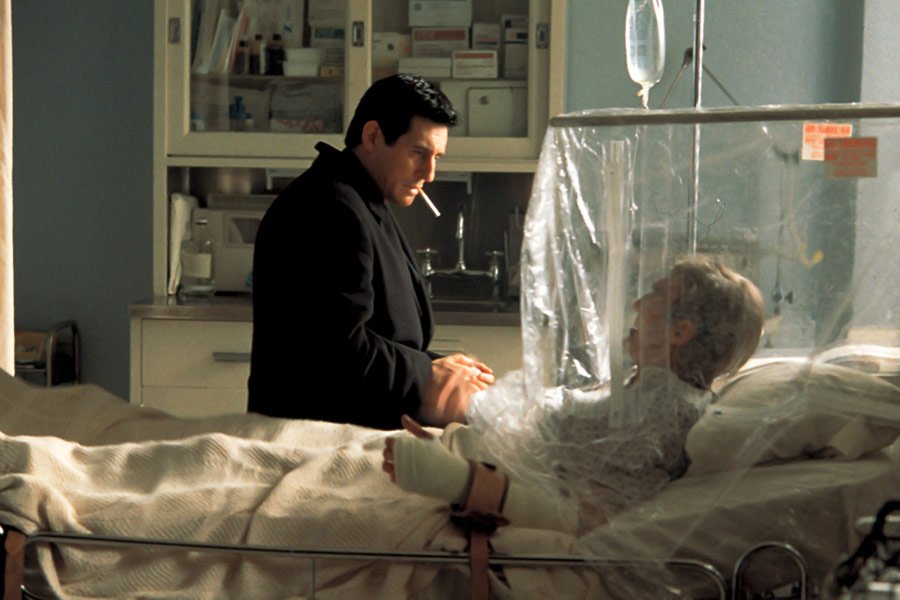 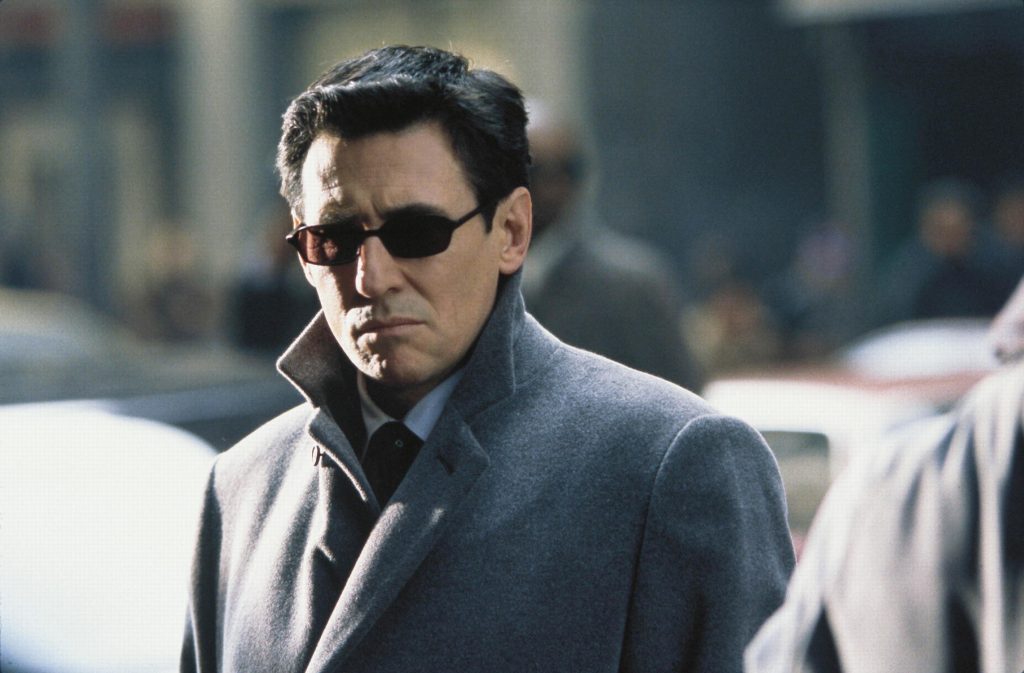 More promotional stills, including some pre-production shots, are in the Gallery. 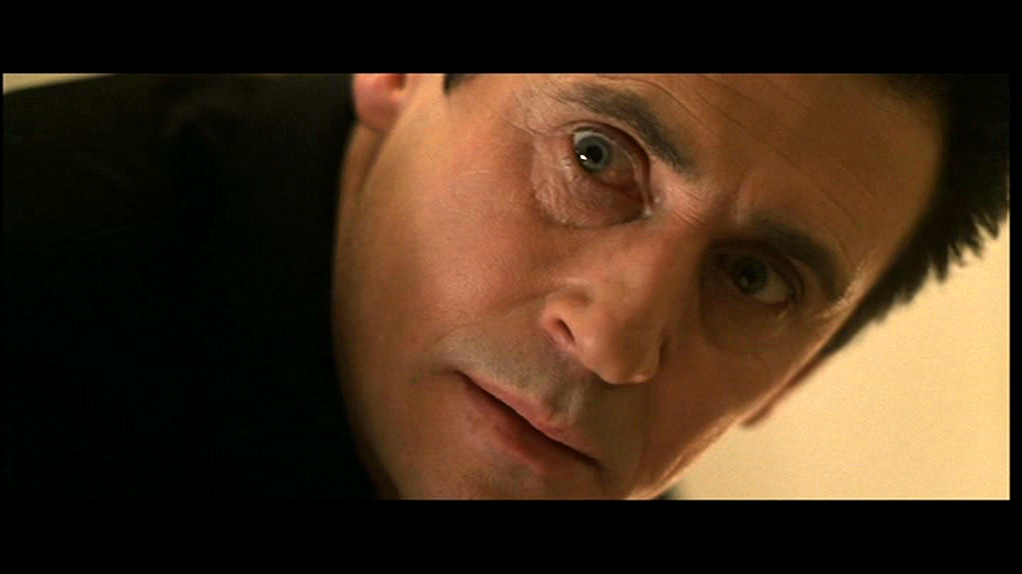 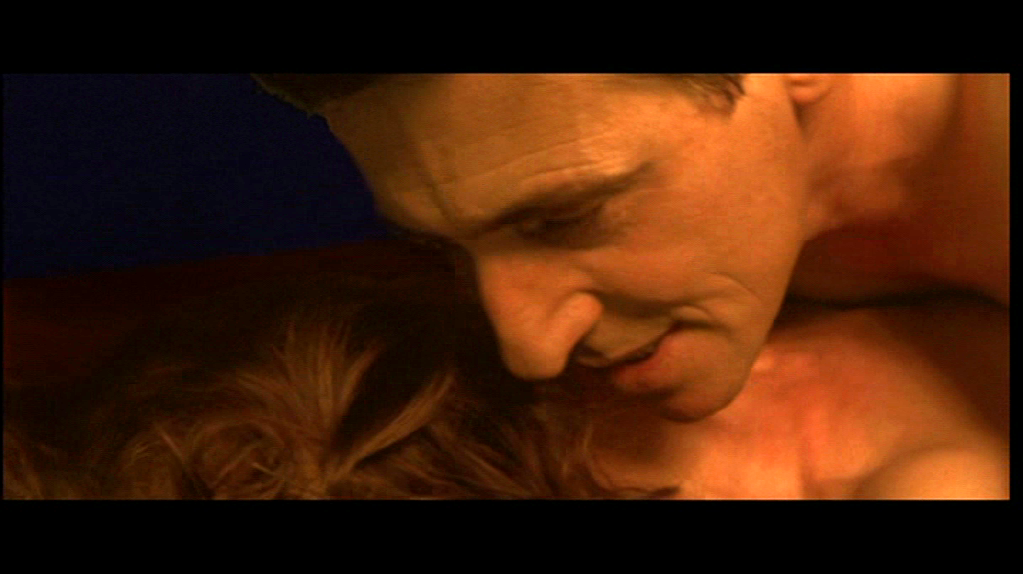 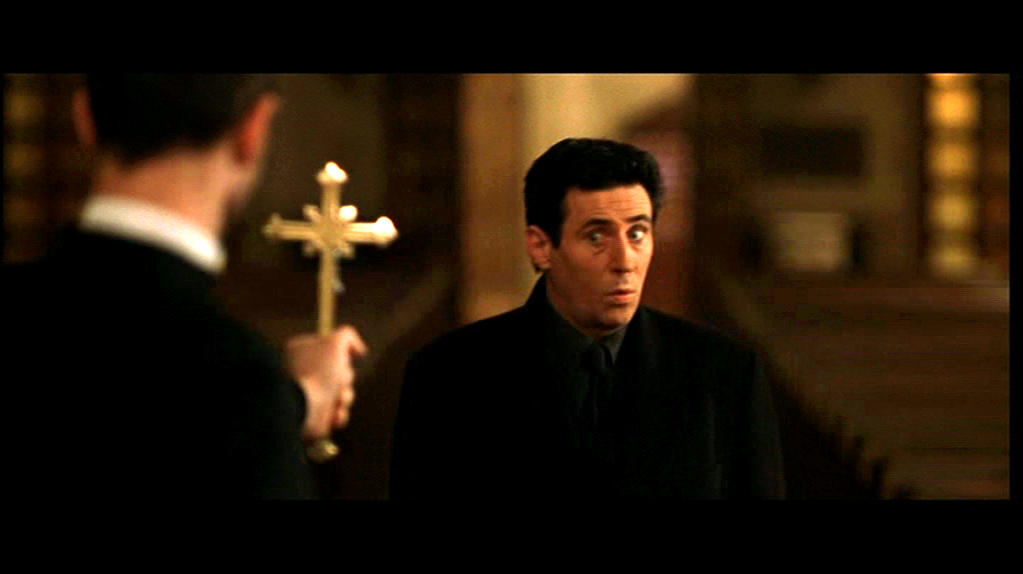 More of Lozzie’s delicious End of Days screencaps are in the Gallery. 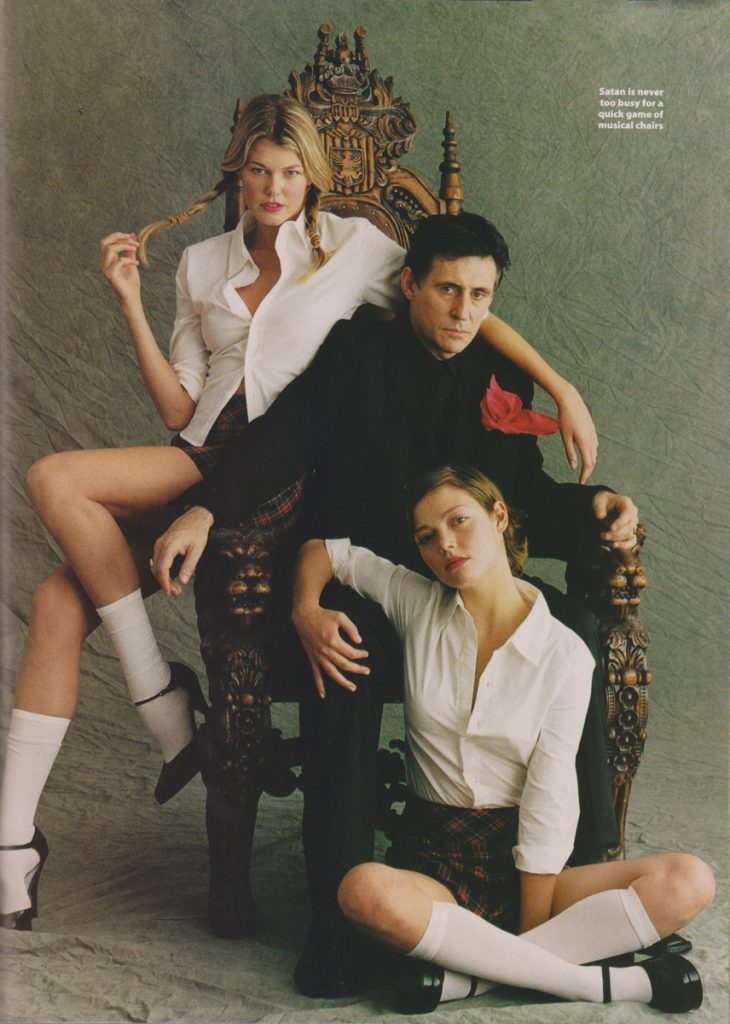 Text: “Satan is never too busy for a quick game of musical chairs”
Maxim 1999, photo by Butch Belair 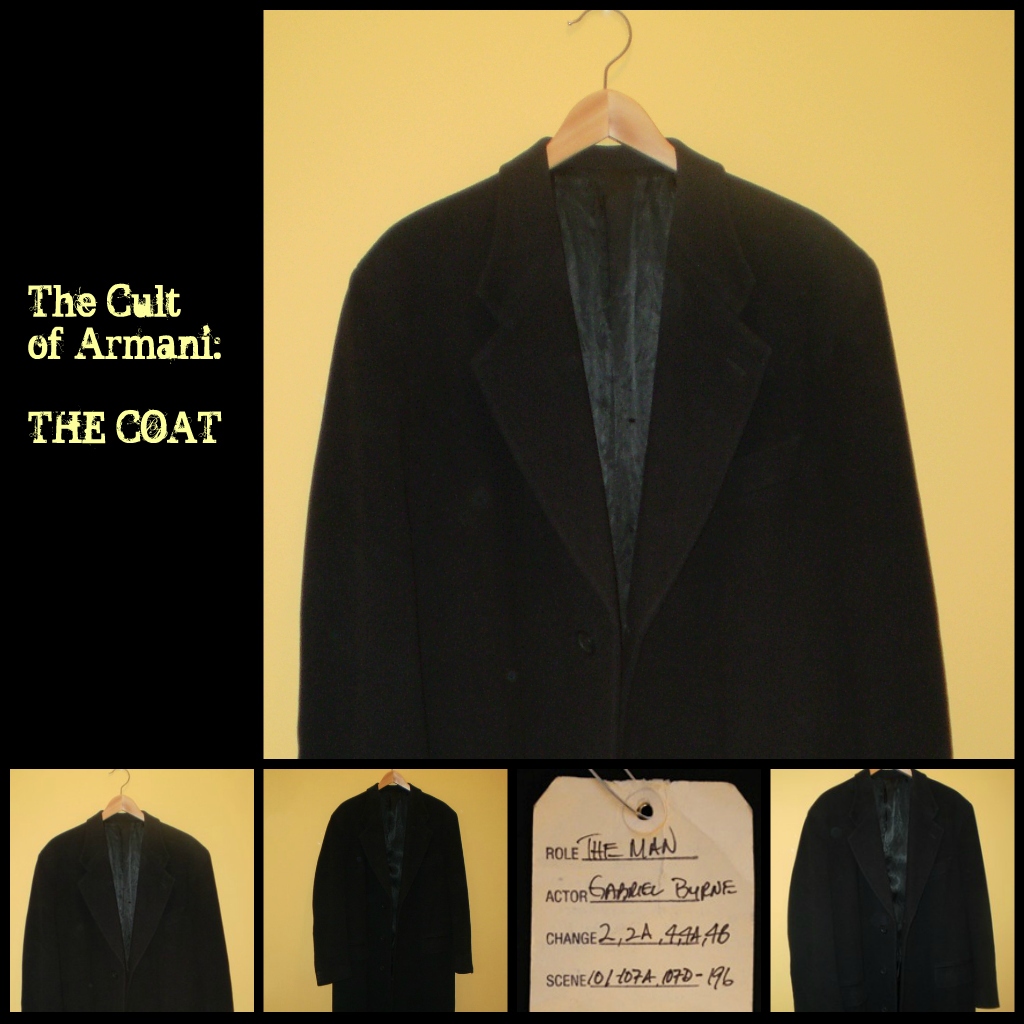 An anonymous donor, whom we heartily thank, has shared these images of the coat worn by Gabriel Byrne in his role as The Man. When she received the article of clothing, she discovered a “day script” and call sheet  in the pocket. In her words:

It’s interesting that the final product wasn’t exactly like this script.  And also, if you can read it, on the “Call Sheet”, it references actors from Stigmata also.  Guess those Catholic priest types had some steady work there for a few months while those two movies were being shot almost simultaneously.

About the coat: a friend of mine saw it on one of those movie prop sites.  They’d also had his suit, gloves, and tie, which were all less expensive than the coat, but already “sold”.  I had to have it.  This movie is such gorgeous Gabeness, and that coat is just beautiful all on it’s own: black cashmere, with a silk lining.  (I can almost feel him in it!)  Yes… yes….. I’ve slipped it on a couple of times… It is an Armani…. cashmere soft as heaven! The tag is readable, it denotes “black Armani Top Coat” for “the MAN”.  And also denotes that there were two small slits in the seams where it was opened for his body mike. I checked the tag inside, it’s a 42 Long.  I was unsuccessful in taking pictures of the “bullet holes” in the back.

The Call Sheet and day script were in the pocket.  The guy who owns the prop business said they found it in the coat when it came in. The “G” written on it almost looks like Gabe’s own hand, though I can’t say that for sure. 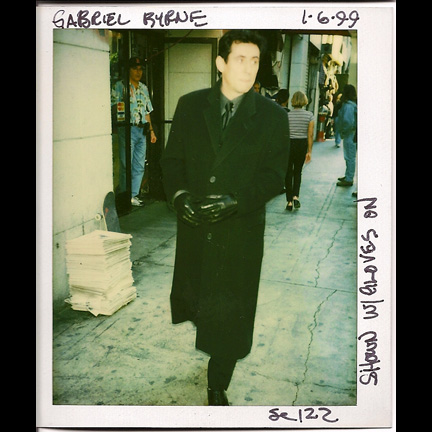 The Man: Now you’re making me angry. You don’t want to see me angry.
Jericho Cane: Oh, you think you’re bad, huh? You’re a fucking choir boy compared to me! A CHOIR BOY!
The Man: You’re in touch with your anger. I admire that. Well, I don’t know about you, but I’m going to have a drink.

The Man: Where was God? He could have stopped it. Instead he fucked you and made you feel guilty. Me, I don’t do guilt.

The Man: Let me tell you something about Him. He is the biggest underachiever of all time. He just has a good publicist, that’s all.

The Man: Just tell me what you want.
Jericho Cane: I’ll tell you what I want. I want you to go to Hell.
The Man: Well, you see, the problem is…
[grabs Jericho and lifts him]
The Man: … sometimes Hell comes to YOU!

Jericho Cane: They’re not real.
The Man: Would that matter?
Jericho Cane: Oh, yes.
The Man: I think you need a reminder of how painful reality can be.

The Man: [to cardinal] For a thousand years you’ve waited for my return. Behold, you have failed. And with your dying breath, you will bear witness to the End of Days.

Brief interview at the Premiere:  the video is not embeddable, so click the link to watch about 1 1/2 minutes of Gabriel Byrne and co-star Robin Tunney, both looking gorgeous and speaking on the Red Carpet. 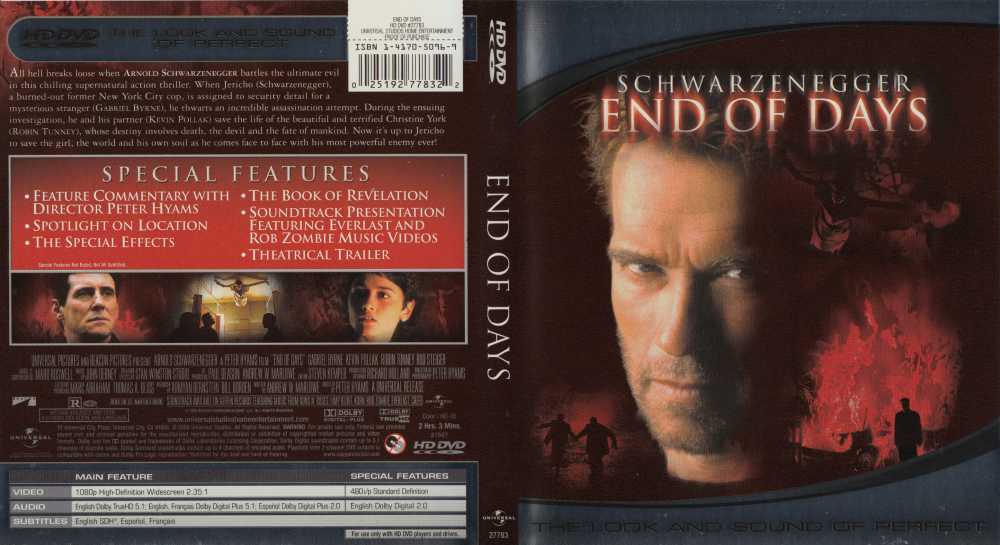 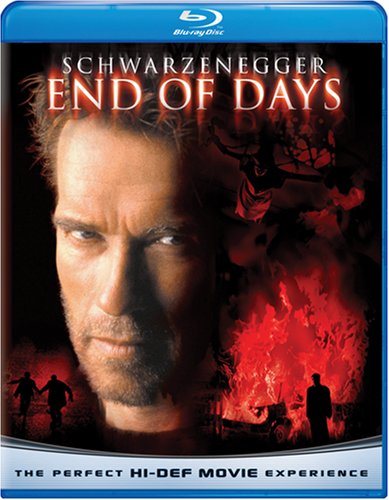 Gabriel Byrne, who has a much snappier role, plays Satan with an evil grin and a slick corporate edge (“Devil’s Advocate”). Actually, Byrne merely plays an investment banker who happens to be overtaken by Satan in the men’s room of a restaurant. The essence of evil, which looks like throbbing plexiglass with attitude (“Predator”), enters the banker’s body with a great show of demonic possession (“The Exorcist”). Once a nice guy, the banker returns to the dining room, walks over to a woman in a low-cut dress and simply grabs her breast. Then he kisses her, and she enjoys it. The episode may not say much about Satanism. But it does indicate something about the guys who made this movie. 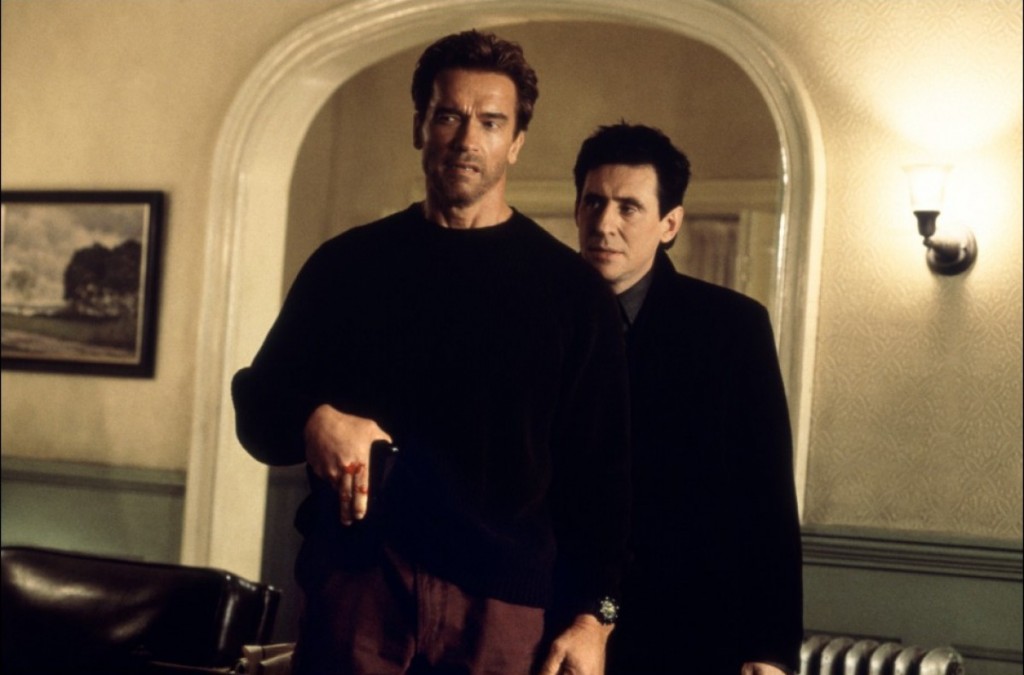 Now I’m confused. Can firearms hurt Satan — or “The Man,” as he’s identified in the credits to “End of Days” — or not? Sometimes the fallen angel (played here with prodigiously enjoyable brio by Gabriel Byrne) can sort of suck up bullets like candy corn; sometimes you shoot him in the head and he comes lurching and slobbering after you with his brains leaking out, like an extra from a zombie movie. Perhaps I’m being too literal-minded, or my understanding of quantum metaphysics is just too limited. After all, as a beefy priest (Rod Steiger) with many years of experience in battling the Horned One explains to Jericho Cane (Arnold Schwarzenegger), “There are forces at work here you couldn’t possibly comprehend!”

From that point on, Jericho and Christine tear through a series of dripping tunnels, back alleys and lavishly appointed churches, with the well-tailored, bedroom-eyed Byrne not far behind. “End of Days” suffers from what scholars of Milton’s “Paradise Lost” refer to as the Satan problem: Byrne is such a seductive and charismatic Antichrist (not to mention a consummately skillful actor) that you wonder why Christine spends even two minutes with the ponderous, mush-mouthed Jericho.

from the DVD menu 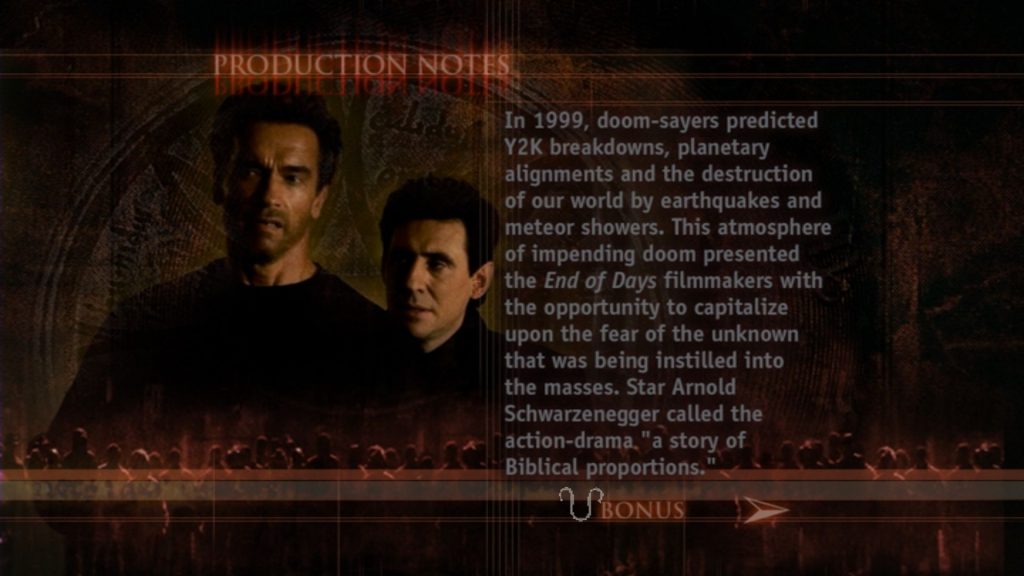 The film features some biting snippets of dialogue that are a cut above the typical action film one-liners. On one occasion, Jericho gets in a nice little dig about Satan having time constraints placed on his sexual activity. And the Devil sets up a scenario in which he describes the Bible as an “overblown press kit.” My favorite scene is the one in which Miriam Margolyes beats the hell out of Schwarzenegger – now that’s something you don’t see every day. When it comes to acting, Robin Tunney (The Craft) is about on par with Schwarzenegger, Kevin Pollak is wasted as the sidekick, and Rod Steiger has no trouble convincing us that he’s a priest. Meanwhile, although Gabriel Byrne doesn’t have as much fun with his fiery role as Al Pacino did in The Devil’s Advocate, he still flashes a lot of demonic charisma. All things considered, End of Days can be enjoyed on a perverse level if you’re willing to suspend all rational thought for a two hour period (which, by the way, is too long – the movie should have clocked in leaner and meaner). Schwarzenegger fans will probably be pleased, action lovers won’t be bored, and the Catholic League will be angry. Everyone else will see End of Days for what it is: a deliciously bad motion picture.

There is a long list of reviews at IMDB. It is fun to read about this very wonderful, very bad film!

Both Kevin Pollak and Gabriel Byrne were in The Usual Suspects and End of Days. In both movies there are similar scenes in which a cigarette is dropped into a flammable liquid.

Udo Kier claimed in an interview that he was considered for the role of Satan in the film but the producers didn’t want the hero and villain to both have German/Austrian accents, and he was eventually cast in a secondary role. 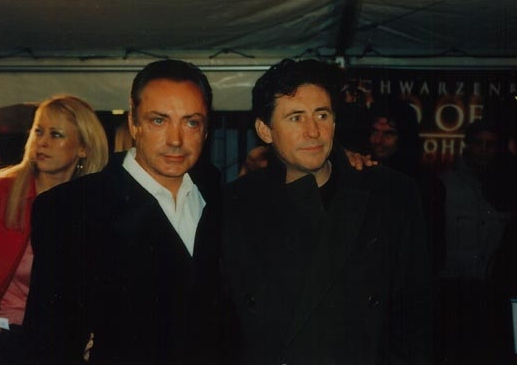 Actor Udo Keir with Gabriel Byrne
We love you, Udo, but it was really no contest…

Byrne-ing Up: A Stoll Round Manhattan In The Dark, by Lozzie, who explains why this is a very entertaining film despite the appearance of its nominal star. This is great stuff, full of her amazing screencaps and very funny commentary!

You do know, don’t you, that this film was stolen right out from under your nose?

Oh, you may have had above-the-title billing. You may have earned more money than Croesus for your part in this film. You may have had the exclusive rights to your face being on the front cover of the DVD whilst the actor who played Satan did not have his name or his image on any of the film posters or the DVD cover … or anywhere, very much.

The actor who played Satan may not appear in the movie’s trailer, even. Only his voice.

But, my dear Mr. Schwarzenegger, this was SO NOT YOUR FILM. No one noticed you in it! Sorry, old chap. But everyone was watching Gabriel Byrne.

As is usual with most devil movies, a lone, imperfect hero fights an implacable, insurmountable foe with little more than his lack of faith to sustain him. Byrne makes a charming Satan – less over-the-top than Al Pacino’s Lucifer in Devil’s Advocate. Byrne underplays Satan as a subtle, affable fella – who rather than fly into a demonic rage when provoked instead creates terrifyingly sudden acts of violence without much of a change of expression. 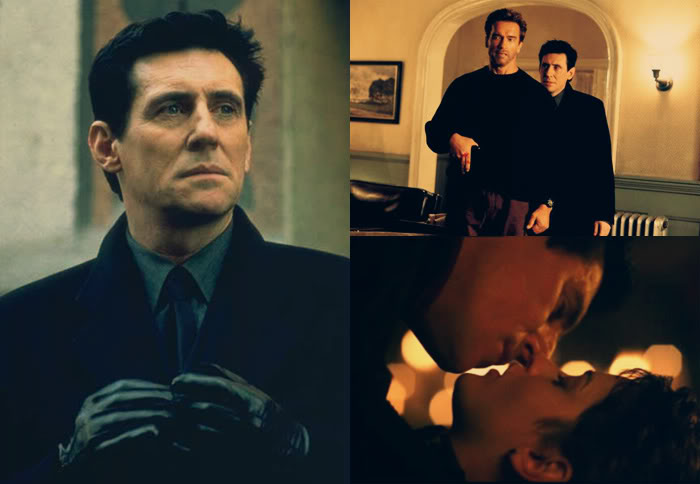 End of Days wallpaper by Ramona 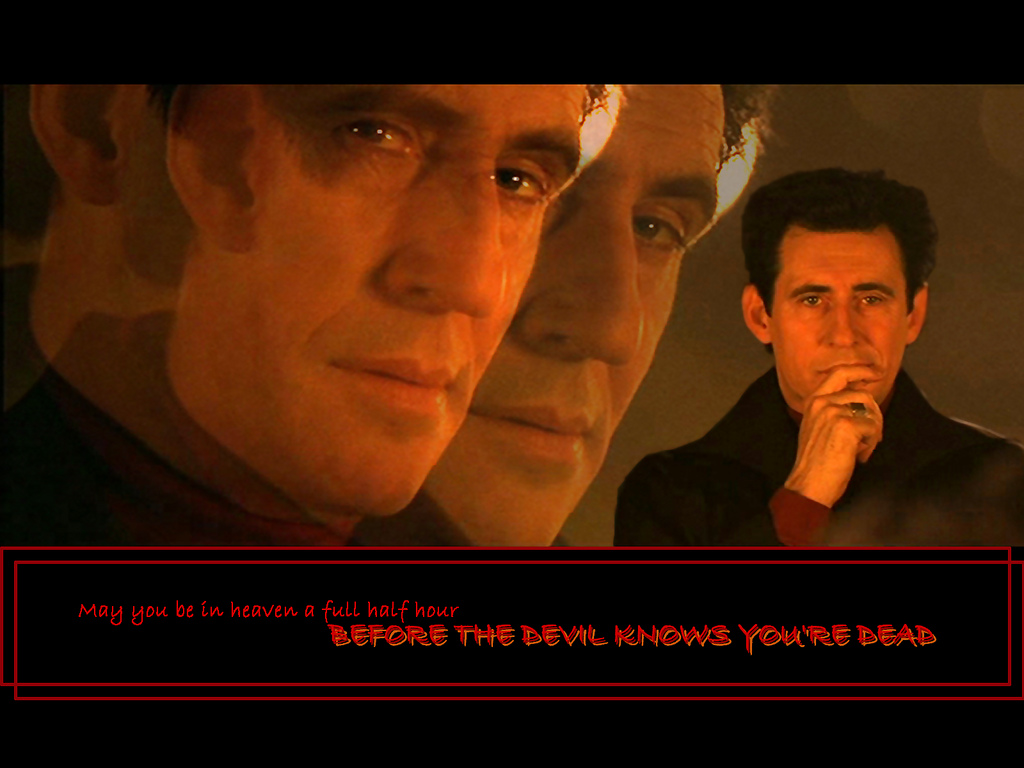 End of Days wallpaper by Aragarna 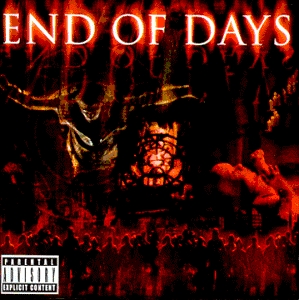 IMDB page for End of Days

Wikipedia page for End of Days

Joke script from The Editing Room

ARNIE, carrying EVERY GUN IN NEW YORK, has snuck up on GABRIEL BYRNE just as he is about to have SEX with the TOKEN BRIDE.

If I can just destroy Gabriel Byrne, then I won’t have to deal with his superior acting and maybe I’ll have a fighting chance.

He SHOOTS GABRIEL BYRNE into so much SHIT, who recomposes himself and attacks again, only to be blown into more SHIT. The cycle repeats. 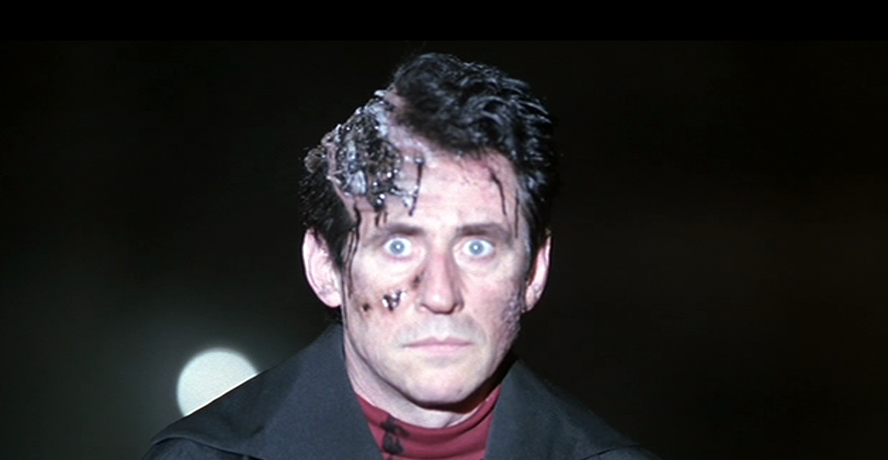 Kudos to Lozzie for her beautiful and evocative screencaps. A big thanks to Daniela for the premiere footage, DeMonk and Daniela for screenies and promo shots, and Ramona and Aragarna for their great wallpapers. And a very special thanks to our anonymous donor for the very special gift of Armani!