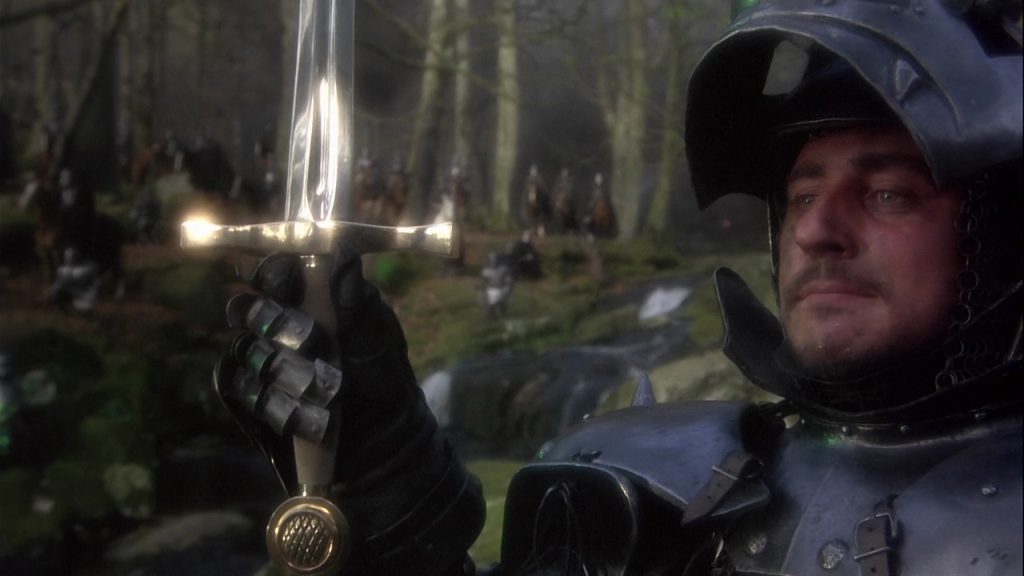 John Boorman directed this gloriously savage interpretation of Arthurian legend loosely based on Thomas Malory’s novel Le Morte d’Arthur. By turns gleaming and filthy, tender and bloody, the film is a visually stunning epic which is never less than compelling. Nigel Terry is perfectly cast as Arthur, whose unwavering trust and faith are shown to be both quietly heroic and achingly naïve. Interestingly, the quest for the Grail is the least effective part of the film, despite bold cinematography by Alex Thomson (who was nominated for an Oscar) and a fine performance by Paul Geoffrey as Perceval, whose greatest desire is attained in his dying sight. It is the scenes of Camelot in which Boorman is at his most effective, as Arthur is betrayed by the burning passions of Guenevere (Cherie Lunghi) and Lancelot (Nicholas Clay), whose boiling internal forces cannot be denied, whatever the cost. The wicked Mordred (Robert Addie) and Morgana (Helen Mirren) are commanding when onscreen, and Nicol Williamson’s performance as the grandiosely self-sacrificing Merlin is outstanding. Liam Neeson and Patrick Stewart also appear in this dense, passionate, and stirring triumph featuring a marvelous Trevor Jones score. The gruesome effects by Peter Hutchinson and Alan Whibley, however, and sights such as a knight having sex in full body armor make this a fairy tale strictly for adults. ~ Robert Firsching, All Movie Guide 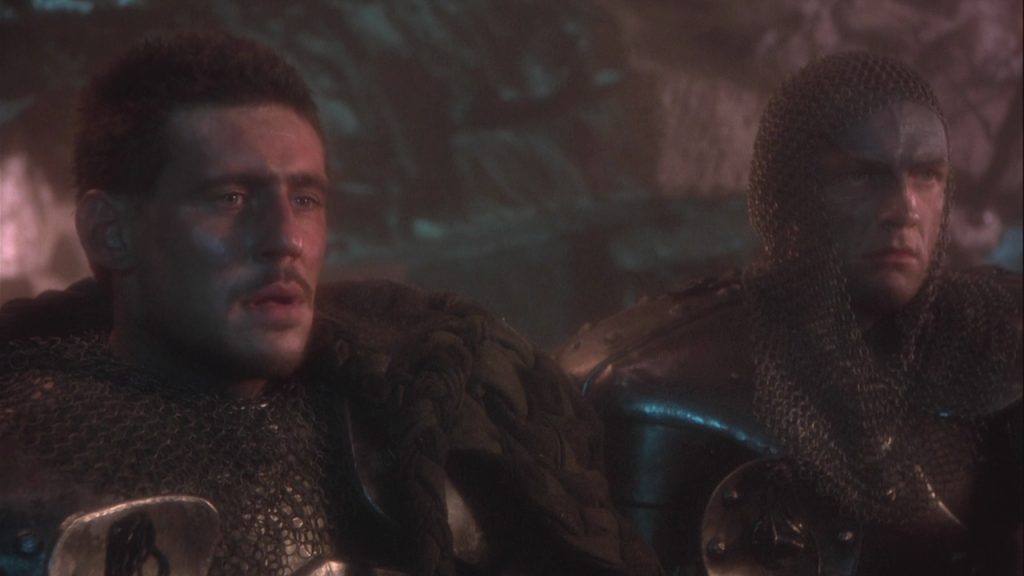 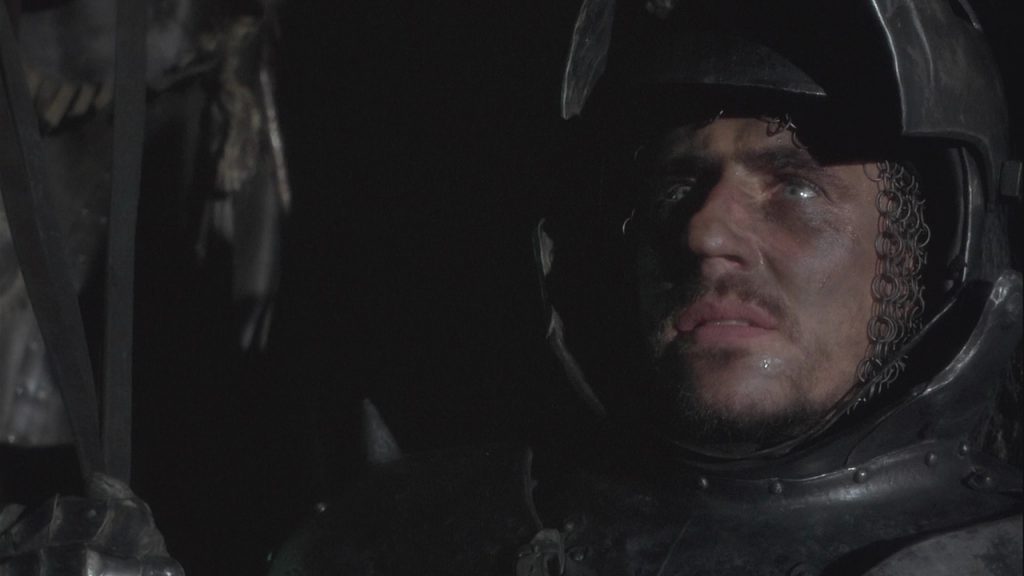 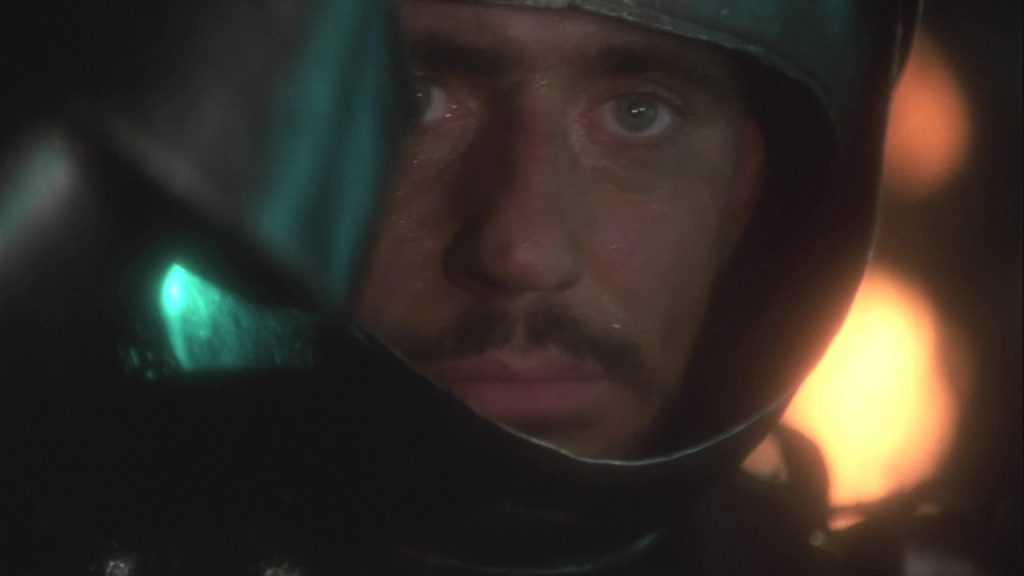 A set of 149 screencaps, created by Lara, is available in the Gallery!

gabriel on working on excalibur

John Boorman came to see The Liberty Suit, and he asked me to be in Excalibur, which was my first break. (I had a naked scene in The Liberty Suit, and when I met John Boorman’s daughter Daisy in England a few years ago, she came up to me and said, “You were the first naked man I ever saw.” I was very flattered.) I hoped that I was going to have long, flowing hair and look incredibly romantic, and John Boorman says, “Well, I think we should cut the hair.” And my heart sank, and I thought, Oh God.

But I had a great time doing that movie. I was working with Nicol Williamson–he told me later on that he could never understand anything I was saying. I was on top of a horse, and the armor stuck into the top of my neck, so when I said “The land from here to the sea shall be yours,” Nicol Williamson turned to John Boorman and said, “He’s saying something about his granny!”

I had my first on-screen love scene in that. I didn’t know anything about the technicalities of making love on screen; I thought that they came along with a camera and put it down and you did the thing, just like on the stage, and the camera captured all the angles. I didn’t understand that you had to do it this way, that way, put the camera here, put the camera there, et cetera, et cetera.

So I was doing the scene with John Boorman’s daughter Katrine, who was playing my wife, and I was supposed to make love to her in quite a violent fashion. They did the wide shot, which was me on top of her in my suit of armor, and a fire burning behind me. I was covered in sweat. Anyway, I made love to Katrine in the wide shot, doing my grunting and groaning and all those medieval sexual shenanigans. Then they came in for the close shot and I was there saying, “Are we going to do it again?”

So then I see them putting a pillow onto the bed, and I hear John Boorman saying, “Okay, Gabriel, can you…?”

“So I have to hump the cushion?”

That was the beginning of my disillusionment with it. I don’t care how into the part you are, there’s always a part of your brain that tells you, “You are making a complete eejit of yourself. Everybody knows that that’s a cushion, and besides, you’re wearing a suit of armor, and who ever heard of anybody raping anybody in a suit of armor?”

Anyway, I did the scene, and I believe I got a round of applause at the premiére in Dublin for doing the job with armor on. People used to say to me, “Come ‘ere, you were in that movie–how did you do it with the gear on ye?” It was a question I was often asked by learned critics. 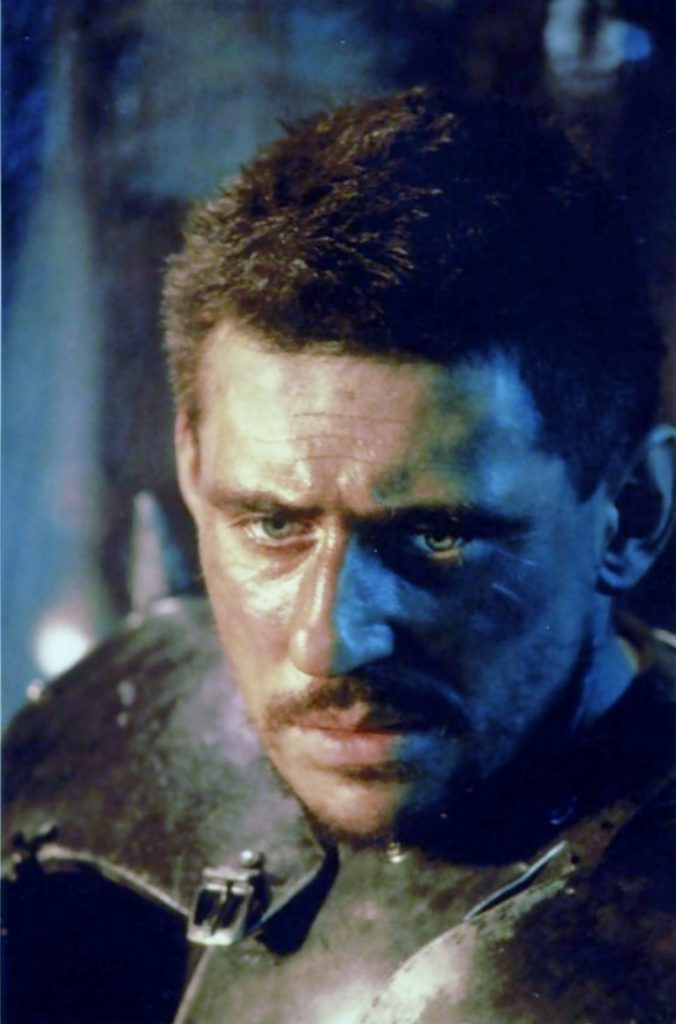 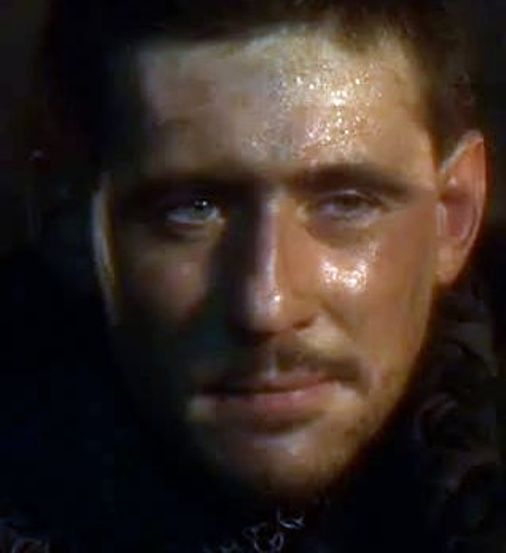 Additional promotional images are in the Gallery. 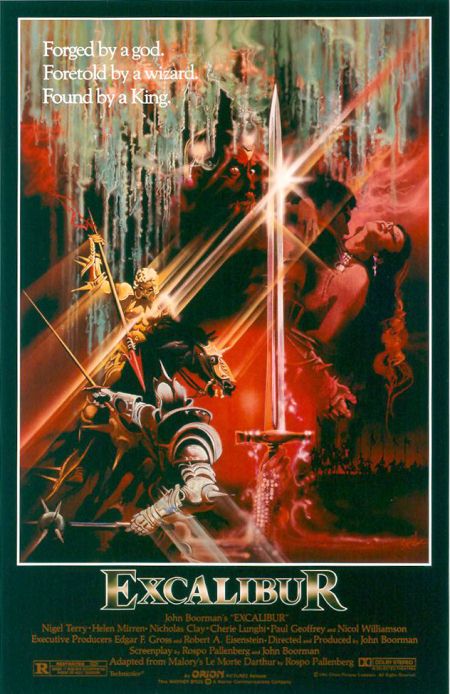 Uther: I am the strongest. I am the one! 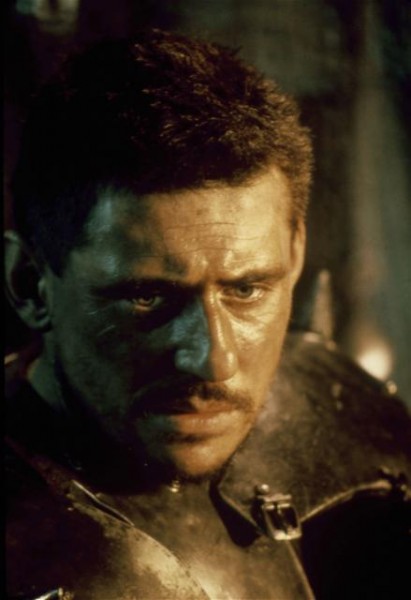 Uther: The sword. You promised me the sword.
Merlin: And you shall have it; but to heal, not to hack. Tomorrow, a truce; we meet at the river.
Uther: Talk. Talk is for lovers, Merlin. I need the sword to be king. 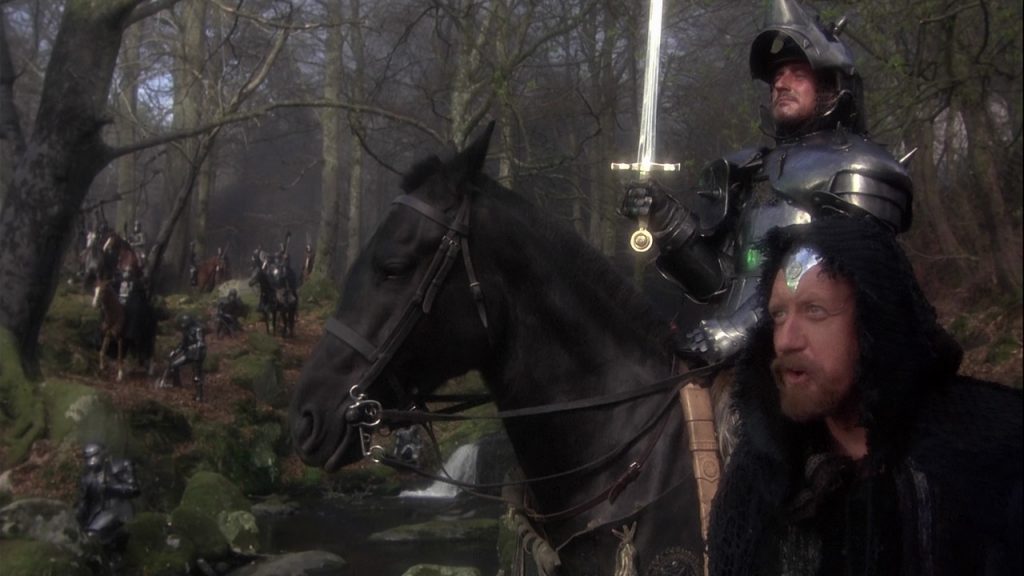 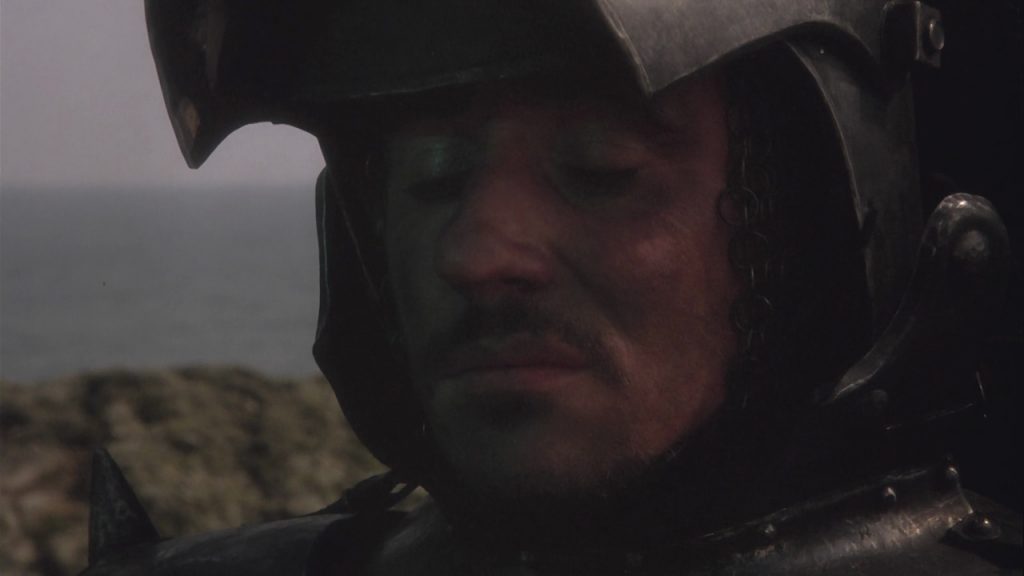 Uther: Where have you been?
Merlin: I have walked my way since the beginning of time. Sometimes I give, sometimes I take, it is mine to know which and when!
Uther: You must help me, Merlin!
Merlin: Must I?
Uther: I am your King!
Merlin: So! You need me again now that my truce is wrecked! Years to build and moments to ruin! And all for lust!
Uther: For Igrayne! One night with her. You don’t understand, you’re not a man. Use the magic. Do it!
Merlin: [considering] Igrayne… You will swear by your true Kingship… to grant me what I wish, then you shall have it.
Uther: [kneeling] By Excalibur, I swear it!
Merlin: What issues from your lust, shall be be mine. Swear it again!
Uther: I SWEAR IT! 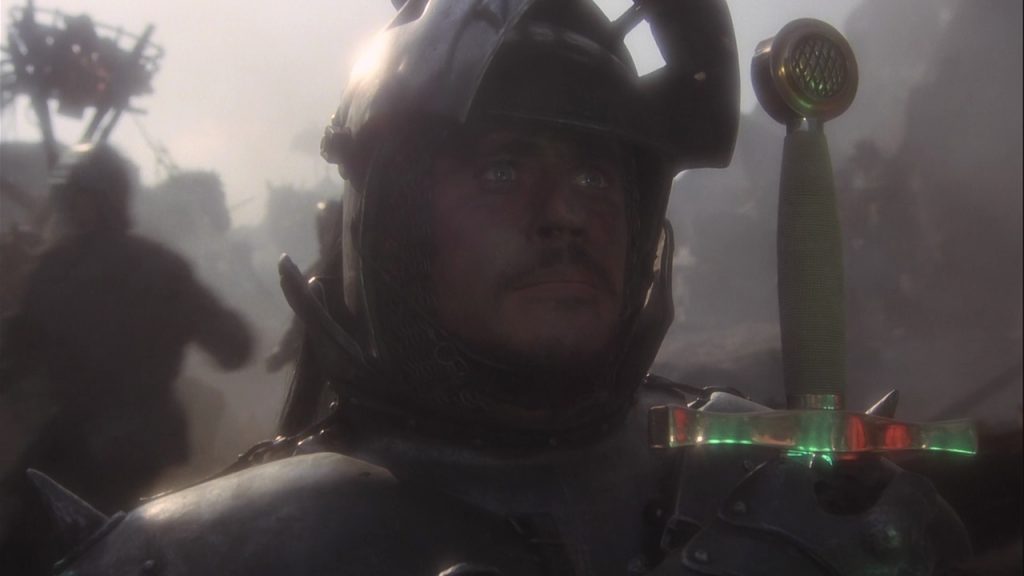 Uther: Merlin! You come when you’re not asked… and pay no heed when I call you!
Merlin: Oh, I have slept… for nine moons. What I did for you wasn’t easy. Now you must pay me… the child is mine, Uther… you swore an oath.
Uther: They were hasty words, Merlin. This is flesh and blood!
Igrayne: Uther, is this true? Don’t let him take the child!
Uther: I swore an oath, Igrayne. I made a pact with Merlin.
Igrayne: It was you, you came to me that night!
[shouts]
Igrayne: You are the father!
Merlin: It’s not for you, Uther… hearth and home, wife and child.
Uther: To kill and be King… is that all?
Merlin: You betrayed the Duke, you stole his wife, you took his castle, now no-one trusts you. You’re not the one, Uther. Give me the child, I will protect him.
Uther: [shouts] Take him… Take the devil child! 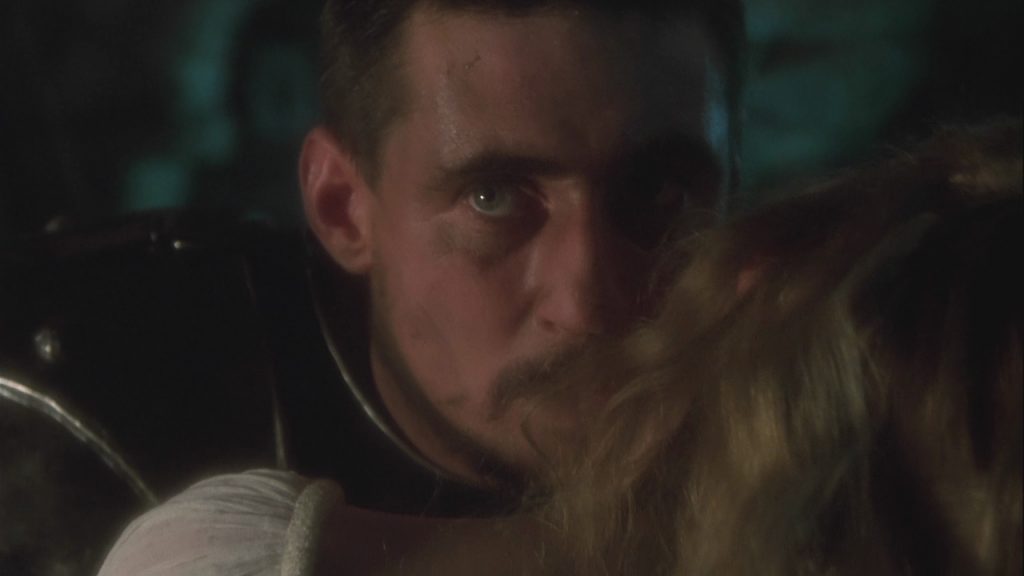 Uther: Merlin! Where are you? Call your dragon to weave a mist to hide us! 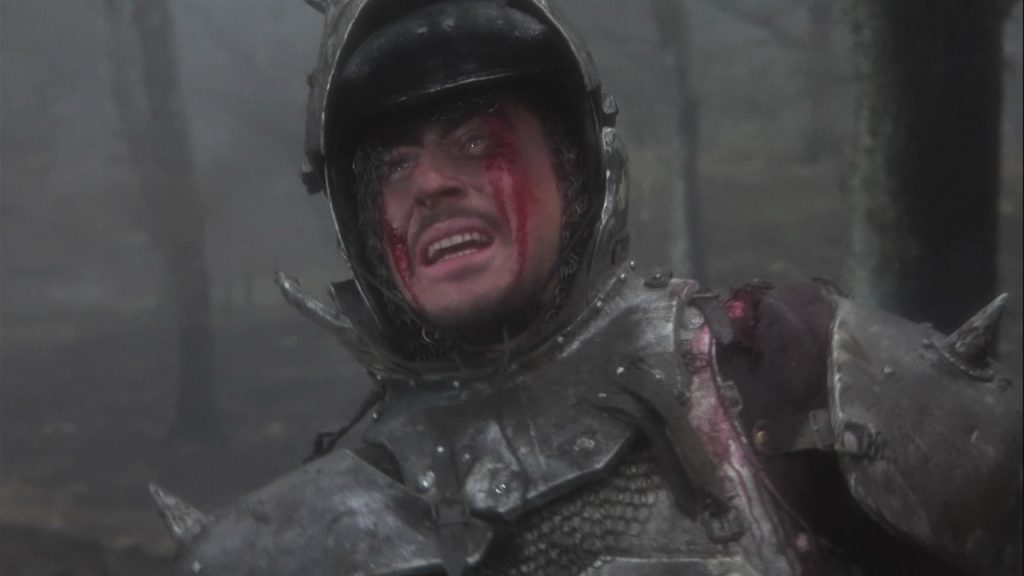 Uther: [Uther is dying after being ambushed] No-one shall wield Excalibur but me!
[drives Excalibur into the stone as he dies]
Merlin:[casting a spell] Whoever pulls the sword from the stone, he shall be king!
[looking at the infant Arthur]
Merlin: You, Arthur, you are the one.

What a wondrous vision Excalibur is! And what a mess. This wildly ambitious retelling of the legend of King Arthur is a haunting and violent version of the Dark Ages and the heroic figures who (we dream) populated them.

Excalibur is one of those great miracles in film making that set the standards for what comes ahead. It’s concept of Arthur and the landscape that surrounds him is a benchmark for fantasy as we know it. 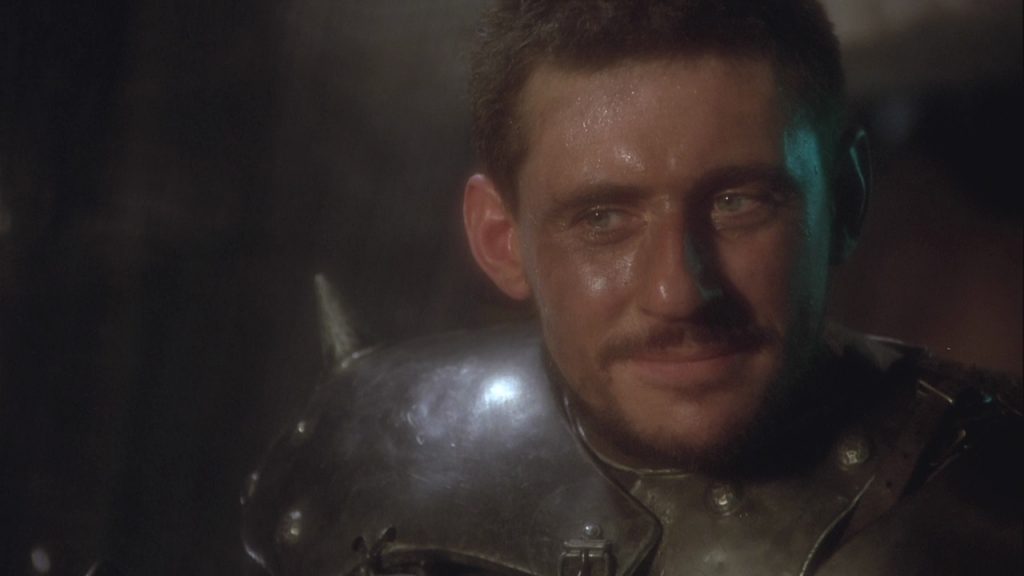 Brian McKay, EFilmCritic [This link is no longer available on the Internet]

John Boorman’s 1981 retelling of the Arthurian legend is a classic. With its sweeping panoramas of the English countryside, its epic battles of clashing men in full plate armor, and its mature storytelling, it is without a doubt the most faithful adaptation of the legend ever told on film….Major props to Boorman for picking through the murky haystack of Arthurian legend and finding a golden needle. Likewise, Mad props to Nicol Williamson for the most memorable Merlin that ever was or shall be. [Note from Stella:  he meant Irish countryside, I am sure!]

Dragan Antulov, Rotten Tomatoes [This link is no longer available on the Internet]

However, despite those minor flaws, Excalibur has one big advantage over most of period, fantasy and sword & sorcery films being made these days. Because its contradictions are part of authors’ artistic vision, this movie represents true art and so far the most honest and most powerful on-screen depiction of the ancient and universal legend.

Shot in Ireland, this is a visually stunning work of art with picturesque nature settings, an extravaganza of costumes and color, and enough optical tricks to bring out the child in us all. The screenplay by Boorman and Rospo Pallenberg offers us an opportunity to appreciate and explore the spellbinding ideas and ideals of the Arthurian myth. Excalibur easily moves beyond all the other screen treatments of this universal story and, thanks to a mesmerizing performance by Nicol Williamson as Merlin, it contains the humor, irony, and intelligence to make it a modern classic.

A cut above all other Arthurian films. 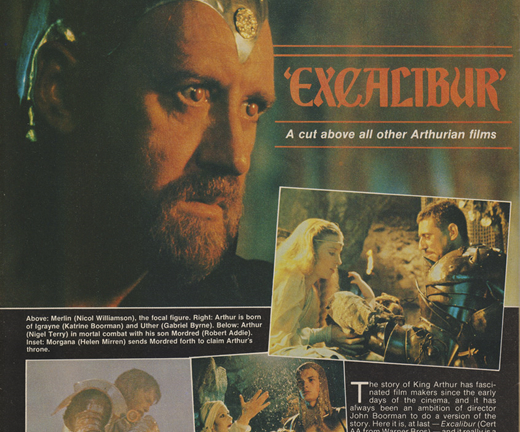 Excalibur: Behind the Movie is a documentary directed by Mark Wright and Alec Moore. The film has been acquired by PBS America.

Excalibur: Behind the Film is a retrospective documentary that looks back at the making of director John Boorman’s 1981 movie, Excalibur.  Self-described as the toughest film he ever made, Excalibur told the tale of King Arthur and the Sword in the Stone and helped start the careers of actors Liam Neeson, Gabriel Byrne, Helen Mirren and Patrick Stewart.  In this one hour film, they join other cast and crew to share their memories from the filming of this Arthurian masterpiece. 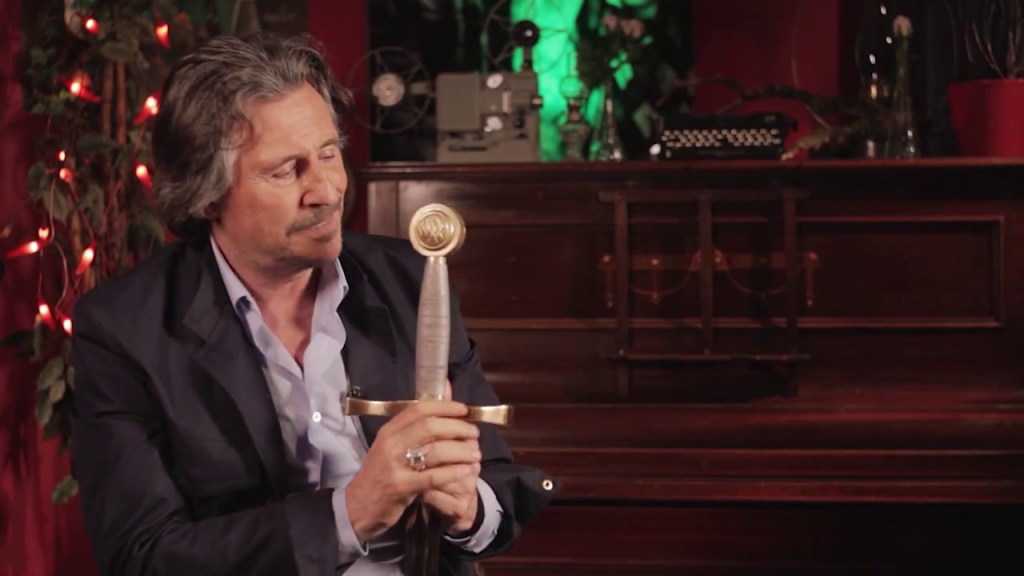 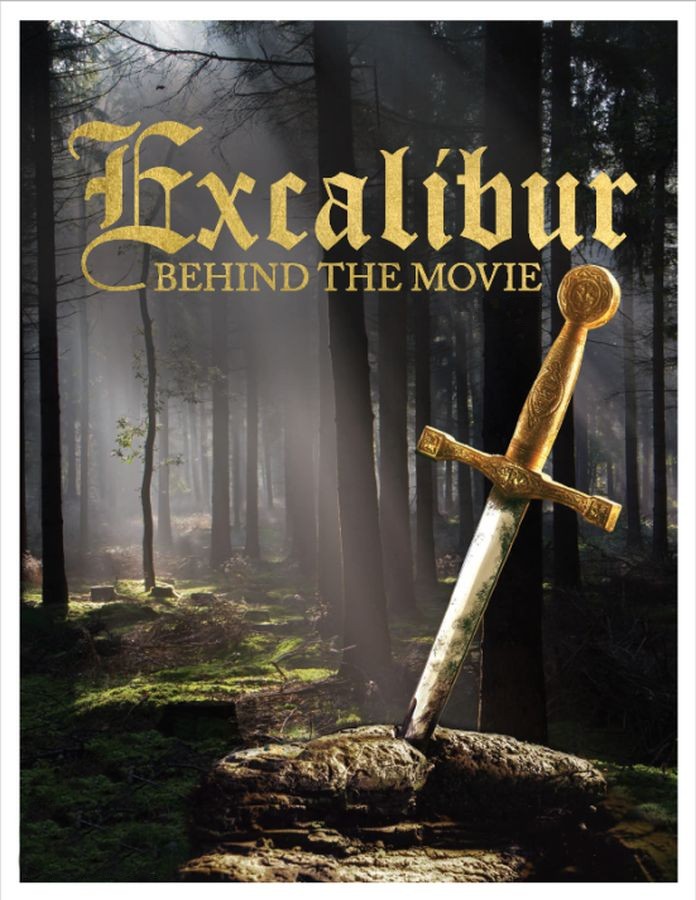 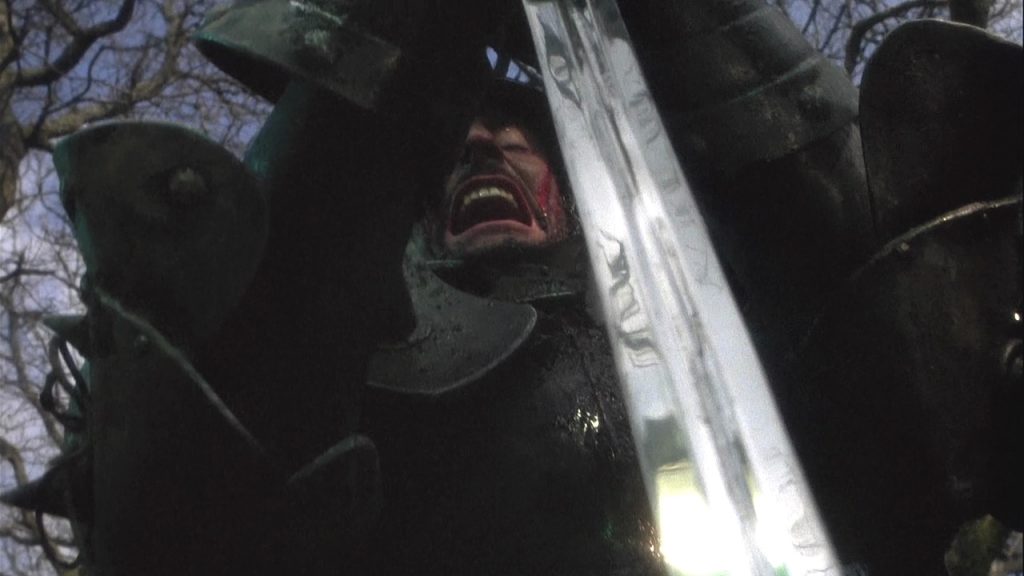 the charm of making

Merlin conjures up a magic spell to allow Uther to satisfy his lust with Igrayne by making him look like her husband. She later gives birth to the future King Arthur.

In English
Serpent’s breath, charm of death and life, thy omen of making.