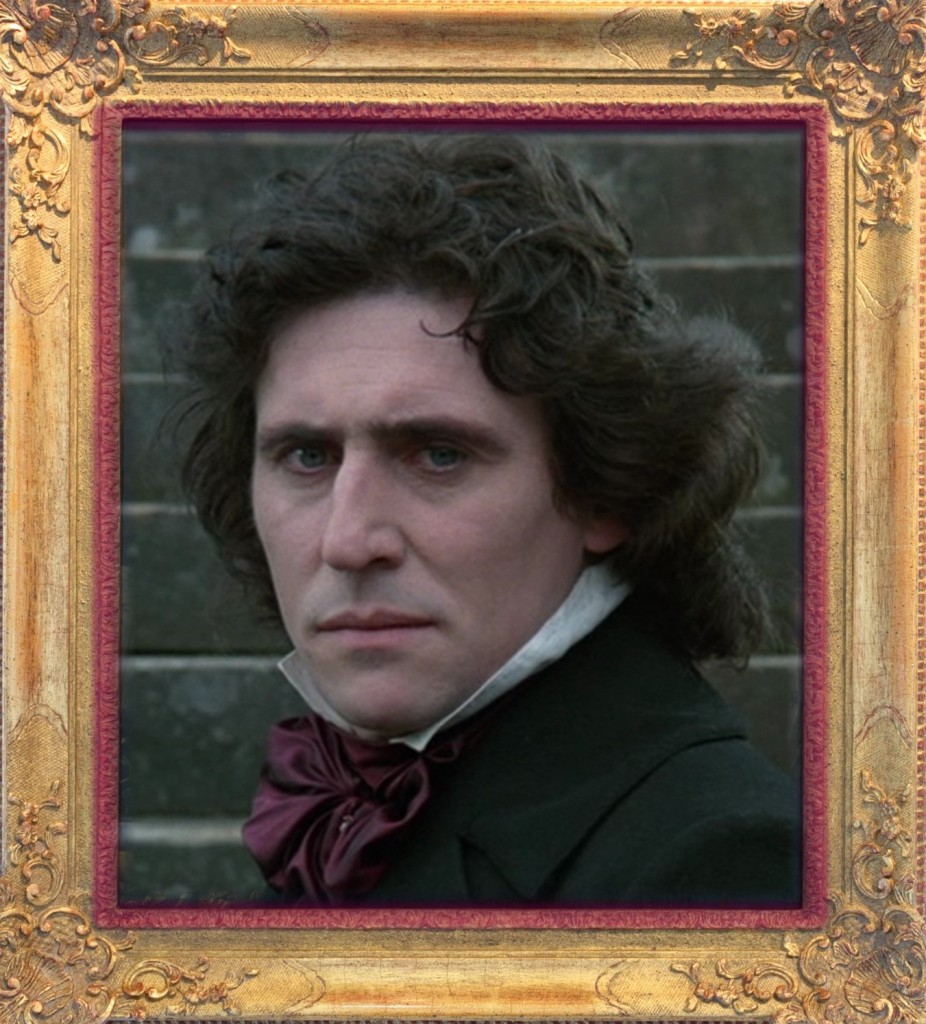 Conjure up your deepest, darkest fear… now call that fear to life!

Directed by cult favourite and “enfant terrible” Ken Russell, “Gothic” delves into the erotic and terrifying night in 1816 that ultimately gave birth to Mary Shelley’s classic horror novel “Frankenstein” and Polidori’s “The Vampire”. While a wild storm rages in the sky over poet Lord Byron’s literary house party on the shores of Lake Geneva, the exiled English poet suggests everyone invent a ghost story. As the dead of night closes in, he and his guests go on to hold a séance to conjure up their deepest, most secret fears. But is it their intense lusts and vivid imaginations at work, or have they truly created a monster? –Stephen Volk’s website

Story of the night that Mary Shelley gave birth to the horror classic “Frankenstein.” Disturbed drug induced games are played and ghost stories are told one rainy night at the mad Lord Byron’s country estate. Personal horrors are revealed and the madness of the evening runs from sexual fantasy to fiercest nightmare. Mary finds herself drawn into the sick world of her lover Shelley and cousin Claire as Byron leads them all down the dark paths of their souls. –Written by Susan Southall at IMDB 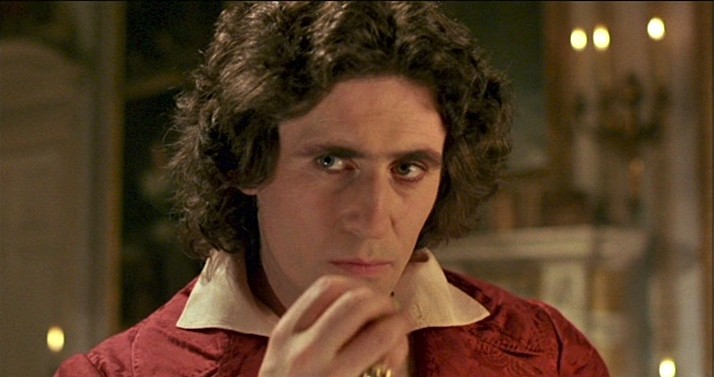 Lurid, kitschy, over the top–what more does one expect from Ken Russell, director of The Devils, Tommy, and Altered States? Gothic purports to tell the story of a night that Lord Byron, Percy Shelley, and the future Mary Shelley spent at a country estate and decided to write ghost stories–a night that ultimately resulted in Mary writing the novel Frankenstein. These three and a couple of friends romp around the mansion, freaking out at shadows and the sounds of a storm, getting increasingly hysterical and hallucinatory as the night progresses. Thrown into the mix are a mechanical belly dancer, nudity, walking suits of armor, an orgy, séances, grotesque masks, leeches, a pig’s head, stigmata, snakes, and God-awful dialogue like “We are the gods now–we have dared to call ourselves creators!” Gabriel Byrne (Byron), Julian Sands (Shelley), and Natasha Richardson (Mary) are all terrible; it’s a miracle any of their careers survived. But good or bad isn’t really the point with Ken Russell, who aspires to a kind of visual delirium. Gothic isn’t the masterpiece of excess that The Lair of the White Worm is, but towards the last half-hour it does achieve a creepy state of disorientation entirely suited to its subject matter. Russell isn’t afraid to be trashy in the pursuit of unfettered cinematic symbolism. It’s a dirty job, but somebody’s got to do it. –Bret Fetzer, Rotten Tomatoes 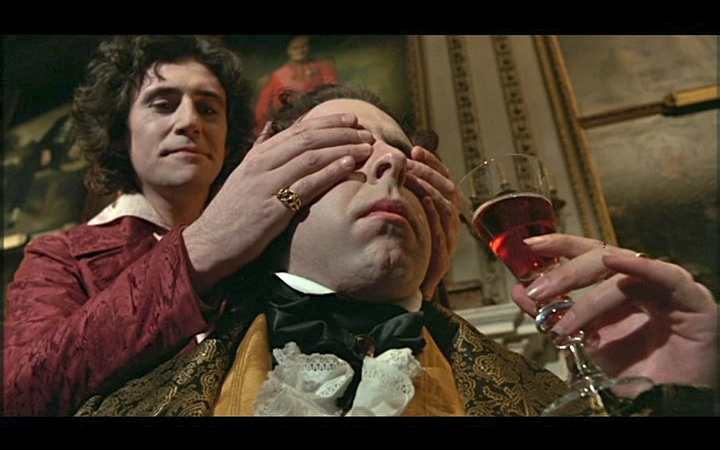 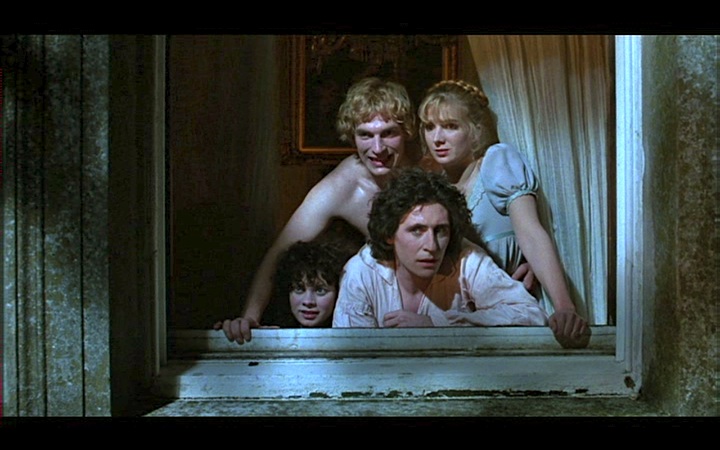 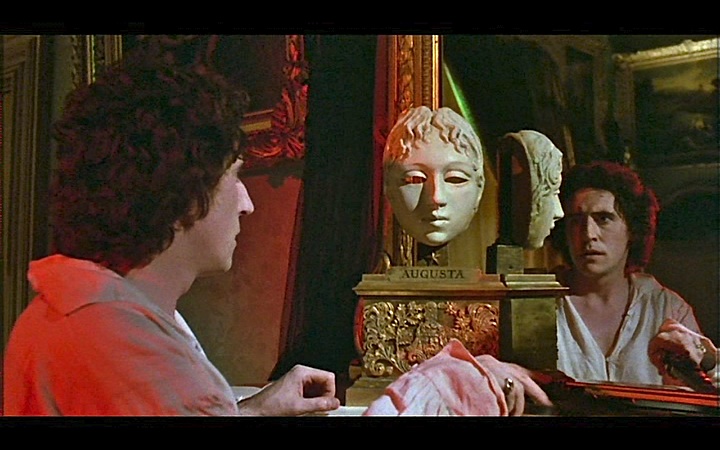 More evocative screen captures from Lozzie are available in the Gallery.

Tour Guide: And there, ladies and gentlemen, on the other side of the lake we have the famous Villa Diodati where Lord Byron, greatest living English poet, resides in exile. Romantic, scholar, duelist, best-selling author of Childe Harold, he was forced to leave his native land after many scandals including incest and adultery with Lady Caroline Lamb. “Mad, bad and dangerous to know” she called him.
[The guide squeezes a lady’s hand and points]
Tour Guide: Bedroom – top right.

Shelley: “Did you see the light? It was like the end of the world.”
Byron: “Then let us live and love, so that people will say that the Devil, as well as God, is an Englishman.”

Byron: “Forget your women, Shiloh. Do not waste your brilliant words upon them. Poets are for each other.” 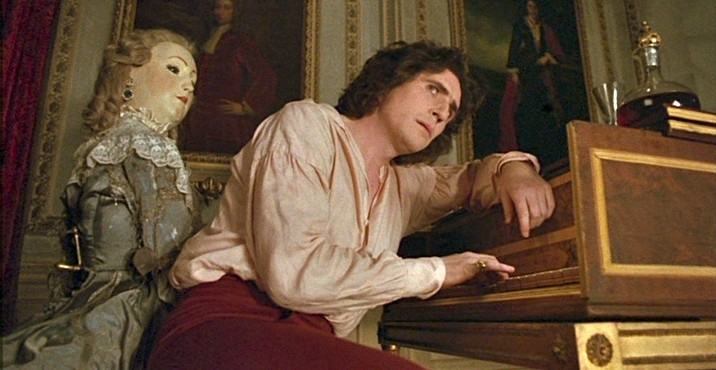 Polidori: “What about a dark English nobleman who draws women to him, sucks their blood, and discards them empty?”
Byron: “Oh yes. Or an obscene Italian doctor, raised by the Benedictines, who turns to sin and buggery.”

Byron: And here I thought you that contradiction in terms: an intelligent woman! 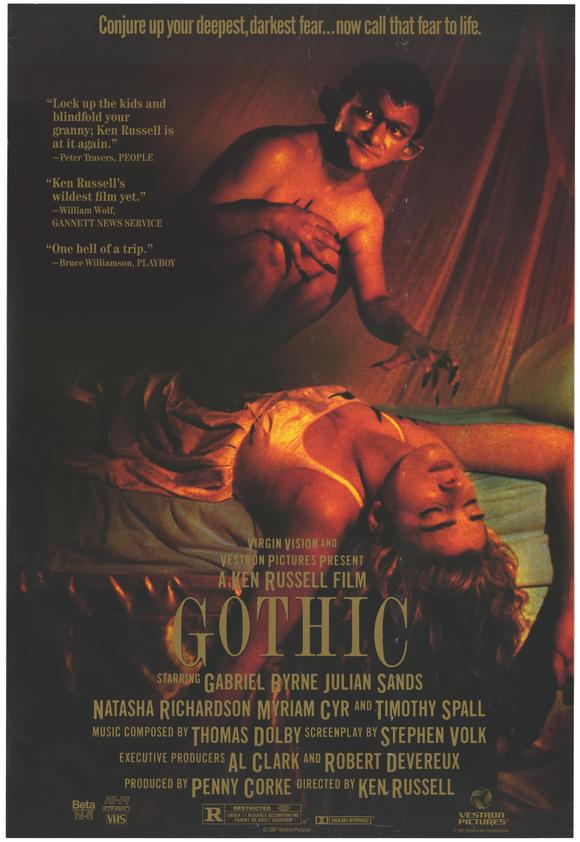 ”Gothic,” written by Stephen Volk, isn’t always coherent, but it’s as ghoulishly funny and frenzied as a carnival ride through ”The Marquis de Sade’s Tunnel of Love”… As Mr. Russell sees them, both Byron and Shelley were rather like today’s more notorious rock stars, and no more or less articulate in matters relating to God, life, death and other metaphysical concerns. They were passionate republicans who behaved like heedless aristocrats, with no interest whatsoever in living down reputations for sexual excesses and what now is called – unromantically – substance abuse.

Russell’s poets romp through mud, slime and nightmare fantasies whilst dressed in the height of Romantic fashion. By movie’s end, they will have purged their fears and accrued a staggering dry-cleaning bill. Byrne plays a grim-faced, perverse Byron with great presence. Julian (“Room With a View”) Sands once again bares his boyish good looks, not to mention buttocks. As a sleazy, sexually repressed Polidori, Timothy Spall seems so revoltingly convincing it makes you concerned for his family. 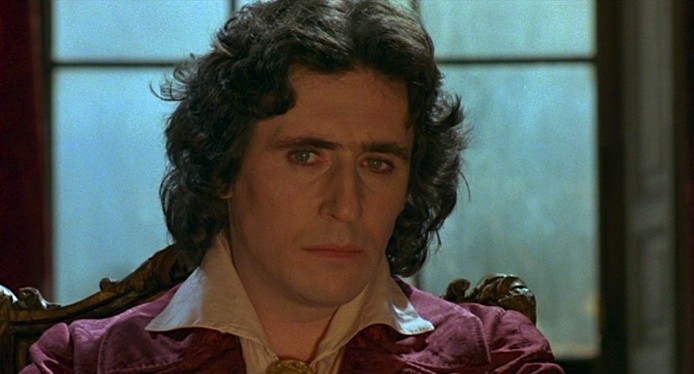 The filmmaking has a slick, confident sheen and a real personality (something you definitely don’t see too much of these days). The authentically surreal, disturbing images Russell conjures are as startling as those of David Lynch. As one critic said of Russell’s TOMMY, it’s probably best to simply sit back and let the film assault you. The cast, for its part, is as spastic and apparently lobotomized as you might expect if you’ve read the above plot synopsis. Still, Gabriel Byrne makes quite an impression as the demonic Lord Byron, and the gorgeous Natasha Richardson, in her film debut, carries the film with grace and confidence, making for a good counterpoint to all the craziness.

So the film is admittedly an exaggerated, plotless experiment in dramatic and visual overkill, and we clearly recognize every minute of its running time as the manipulation of an overambitious director who seems to go a little madder with every film he gives us. Fortunately, we’re not alone in recognizing these handicaps. So does Ken Russell, who uses these illogical eccentricities to draw attention to subtler ideas which, if you squint enough throughout the carnage, are actually pretty compelling. First of all, the house itself is a fantastic collage of gothic motifs and designs; Russell knows this genre, and every frame contains homage to great literature and art from the gothic and romantic eras.

You will cleave to this tortured bit of cinematic epilepsy because it is ALIVE… I came away from Gothic with my soul on fire… (…) because it is dangerously conceived, impudently mounted, uncaring of its footing, determined to crawl the wall or tumble into the abyss, all in the name of disgorging the absurd demon in thought.“ 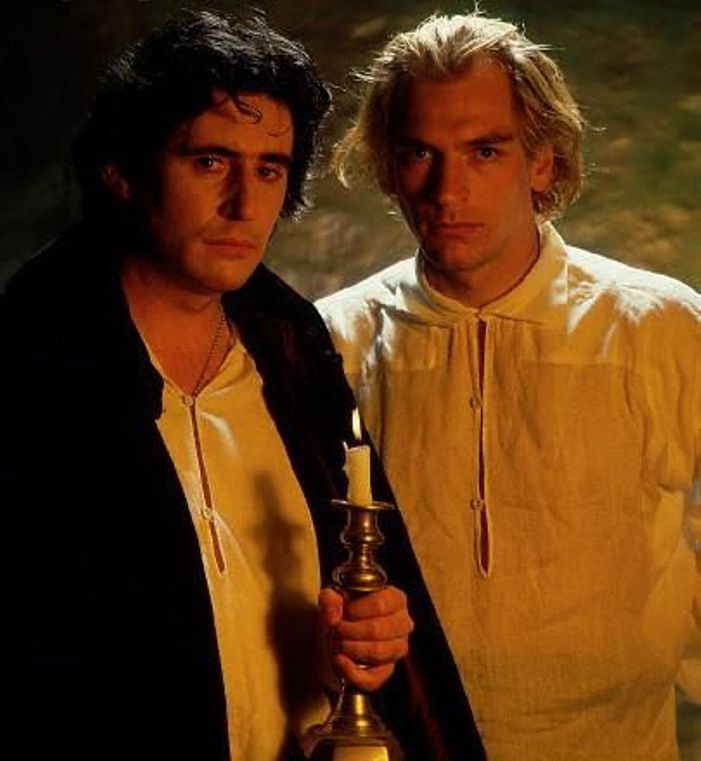 Gabriel Byrne walks with a limp and carries a cane because the real Lord Byron had a club foot.

Director Cameo: Ken Russell on the tour boat with his family at the end of the film.

The image used in the poster for the film is based on a very well-known painting by Henry Fuseli, The Nightmare.

So many people slag this film off and honestly, I don’t understand why. Yes, I agree, it’s blatant over-wrought melodrama – but isn’t that the whole point? I mean, DUH, the title of the film is in fact … “Gothic”! Does that not give you a clue as to its content?

Things I learned from this movie:

Ghosts and monsters mark their territory with puddles of semen.
Creating an entity out of your worst fears is a really stupid idea.
Sex partners never die, as long as you have a death mask and a willing stand-in.
You are never too old (or too intellectual) to play hide and seek.
Some women can blink their nipples.
There’s nothing more deliciously thirst-quenching than a jar of leech water.
Mechanical Turkish women don’t like their hoo-hoos touched.
The “free love” concept existed long before the 60’s. 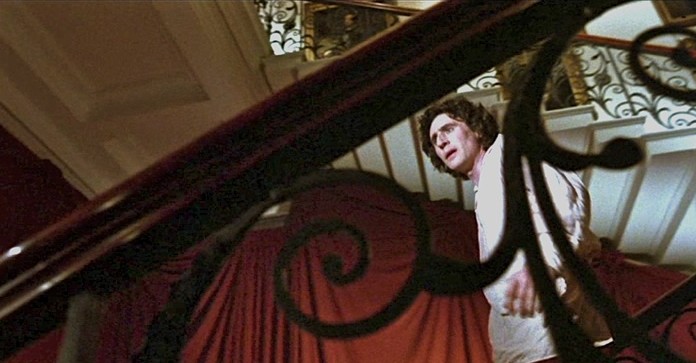 Fact 6: At certain points, the story is historically accurate. Mary Shelley was inspired by the ghost-story-writing competition, Claire Clarmont did get pregnant with Lord Byron’s illegitimate daughter, Byron was into some kooky and kinky stuff (as in, his half-sister- Gothic goes there and goes there and then takes a month-long, drug-addled vacation there), Shelley did hear parts of Coleridge’s unfinished poem Christabel and then imagine seeing eyes in the middle of breasts, and Byron’s doctor, John Polidori , did hear a vampire story Byron was thinking of writing and then took it, rewrote it to star Byron as a vampire, and then published it to great acclaim. Then, of course, the camera zooms in on a fish in a bird-bath or Byron’s incredibly creepy collection of life-sized mechanical dolls and you have no idea what the hell is going on.

Supposedly this one night spawned Mary Shelley’s Frankenstein as well as the first vampire story published in English, so dramatists and horror historians love to revisit it. I haven’t seen the others, but for sheer imagery and inventiveness, it’s hard to imagine anyone topping Russell and this great movie. The actors are into it, throwing themselves histrionically into the fantasy. Fun music, even cartoonish at times, by Thomas Dolby. Things get increasingly traumatic and dreamlike as the night wears on, with apparent murders and accidents and Mary Godwin’s (she hadn’t yet married Shelley) visions of her dead child. Strange ending, as they’re all perfectly fine in the morning…

The score to the film is by Thomas Dolby and was his first experience with an orchestra.

At final consideration, GOTHIC is loopy and fatally flawed and an aberration. Yet I treasure this film. So may you. If you, as am I, are out of your head… you will cleave to this tortured bit of cinematic epilepsy because it is ALIVE. It is yet another crime of passion committed by Ken Russell, and his sort of berserk creativity has fallen on such hard times in this age of Reagan and yuppie sensibility, that simply to be exposed to the ravings of an inspired madman is cathartic…I came away from GOTHIC with my soul on fire. It drove me to this essay, all 5000+ words of it. BACK TO THE FUTURE had no such effect on me. Nor have any of the hundred or so films I’ve seen in the last six months had anything remotely like that effect. We live in a time of “safe” art that is in no way art, but merely artifice. GOTHIC frightens, after the fact, because it is dangerously conceived, impudently mounted, uncaring of its footing, determined to crawl the wall or tumble into the abyss, all in the name of disgorging the absurd demon in thought…The final assertion of critical judgement on GOTHIC is not whether or not it is good, or whether one likes it or not. The undeniable truth of GOTHIC, as in all the work of Ken Russell (an artist who is either so mad or so foolhardy as not to care if he wins or loses), is that it is palpably ALIVE. It is riot and ruin and pandemonium. But it will have you by the nerve-ends. And isn’t that what Real Art is supposed to do? Even in Canton, Illinois?

If his work from the late 1960s and ’70s will stand as Russell’s best, there was still energy, visual flair and a very English eccentricity to admire in those that followed, even those he shot Stateside such as “Altered States” (1980) or “Crimes of Passion” (1984), or those that were critically reviled at the time, like “Gothic.” But then, Russell never much cared what critics thought, and has the distinction of being one of the few directors caught on camera bashing a film critic (Alexander Walker) over the head with a copy of the critic’s own review. 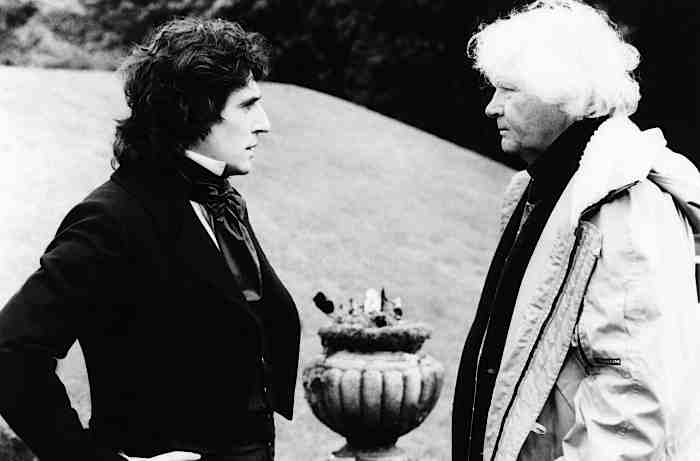 Natasha Richardson made her film debut in Gothic; The New York Times on her tragic death in 2009. 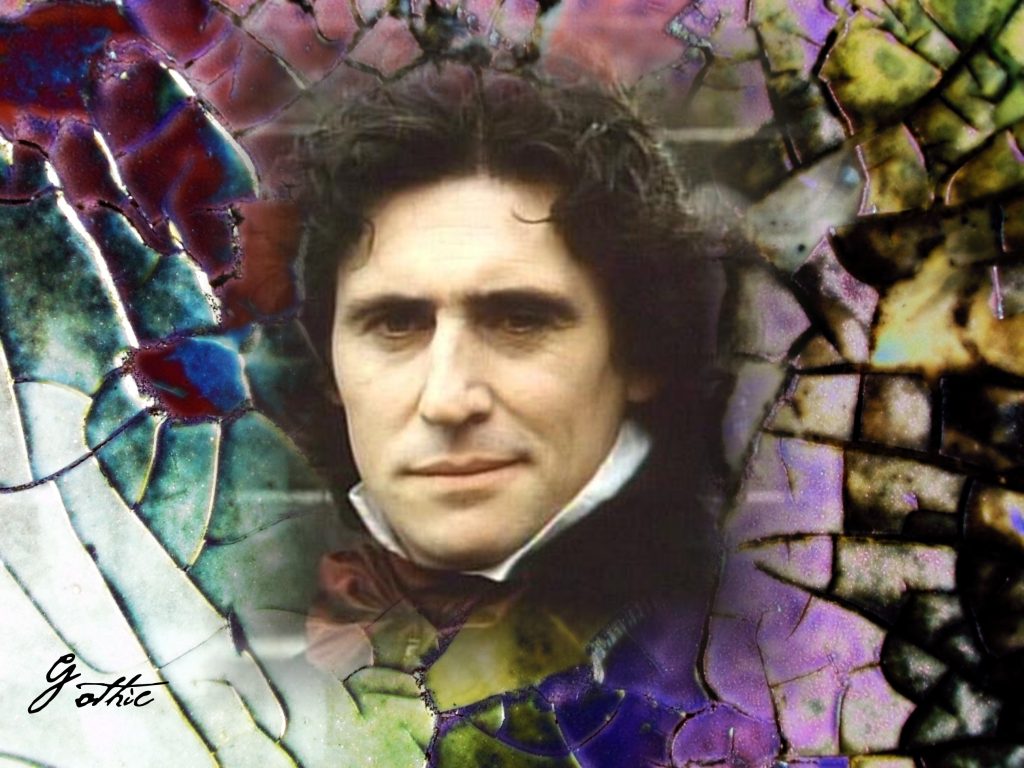 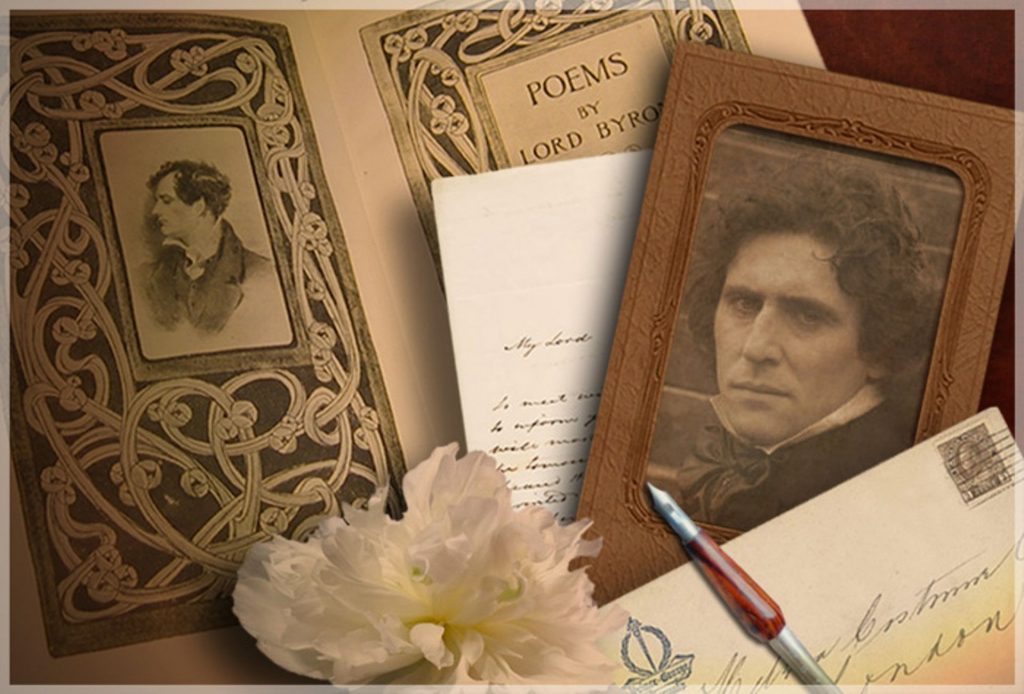 Thanks to Lozzie for her wonderful screencaps!