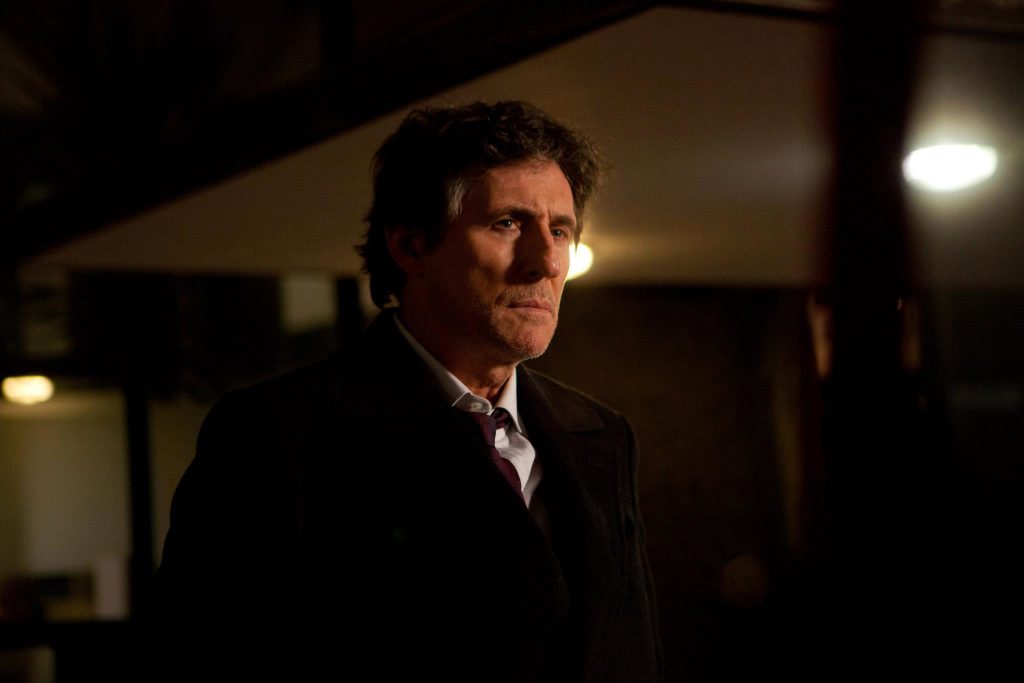 Written and directed by Barnaby Southcombe

Based on the novel I, Anna by Elsa Lewin

I, Anna squeaks by to freshness at Rotten Tomatoes with a score of 58, which notes that no consensus has been reached yet.

The darkest secrets are the ones we hide from ourselves.

A must for all who love noirish thrillers, Southcombe’s directorial debut features a stellar cast, headed by Charlotte Rampling and Gabriel Byrne. Rampling plays the titular character, who may hold the key to a murder investigation being conducted by Byrne’s insomniac detective, as she was at the apartment of the victim on the night of his death. Anna’s perspective on the crime makes us doubt the truth of what we see, which makes for a compelling psychological mystery. —Rotten Tomatoes

London‐set psychological thriller I, ANNA is a film that crosses genre boundaries. It charts the story of a woman whose life is turned upside down after a singles party date goes wrong, and the impossible love of the detective tracking her down. —I, Anna Production Notes

A brooding psychological, thriller, told from the point of view of a female murder suspect, who falls for the detective in charge of the case.

A man is found bludgeoned to death in a London apartment block. DCI Bernie Reid, an insomniac dazed by the prospect of divorce, is first on the scene, but is distracted from his duties by a brief encounter with Anna.

Going through the motions of the case, Bernie’s thoughts return to Anna whom he tracks down and follows. When they finally meet at a singles party, the mutual attraction is instant, although Anna has no recollection of Bernie, nor of the night they first met.

As Bernie’s professional judgement battles with his desire for intimacy and love, the mystery deep within Anna’s mind finally unravels, revealing a truth too painful to bear. –From the I, Anna Facebook Page 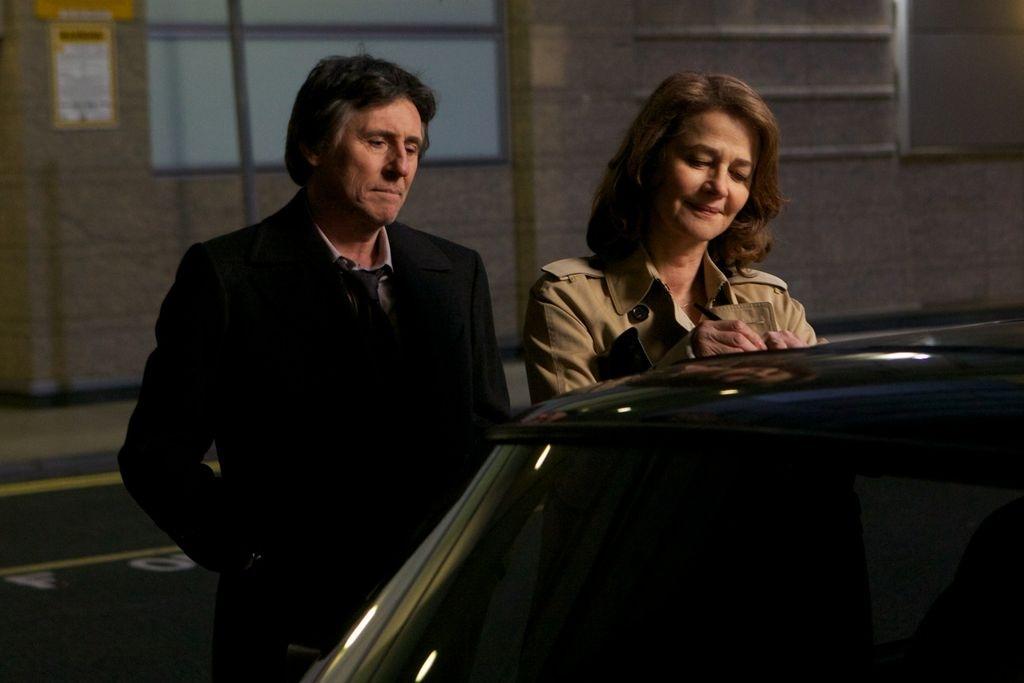 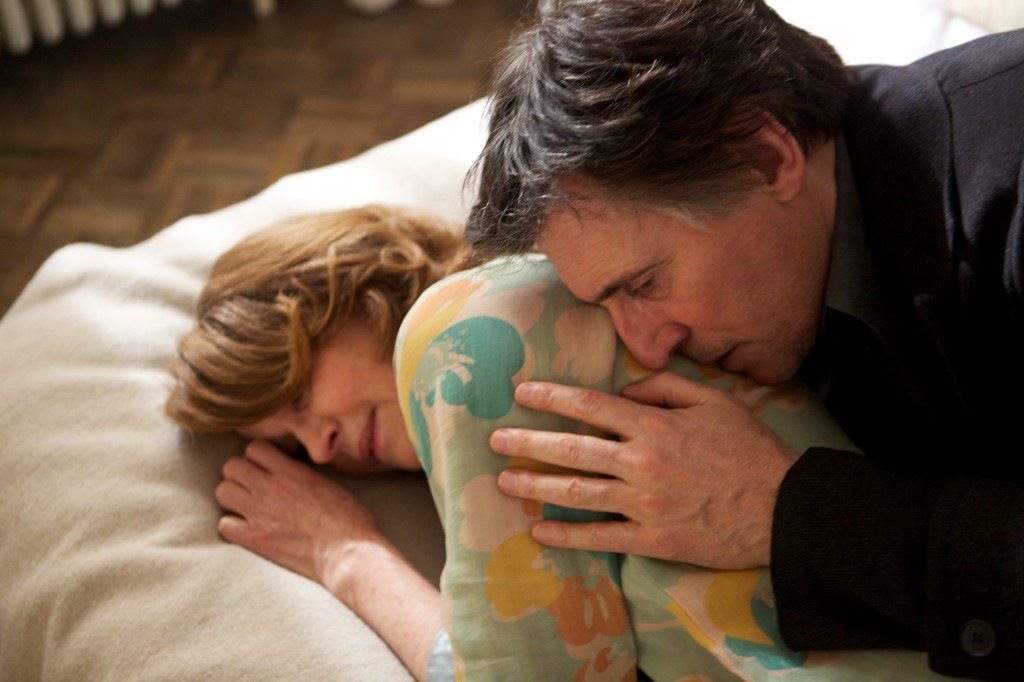 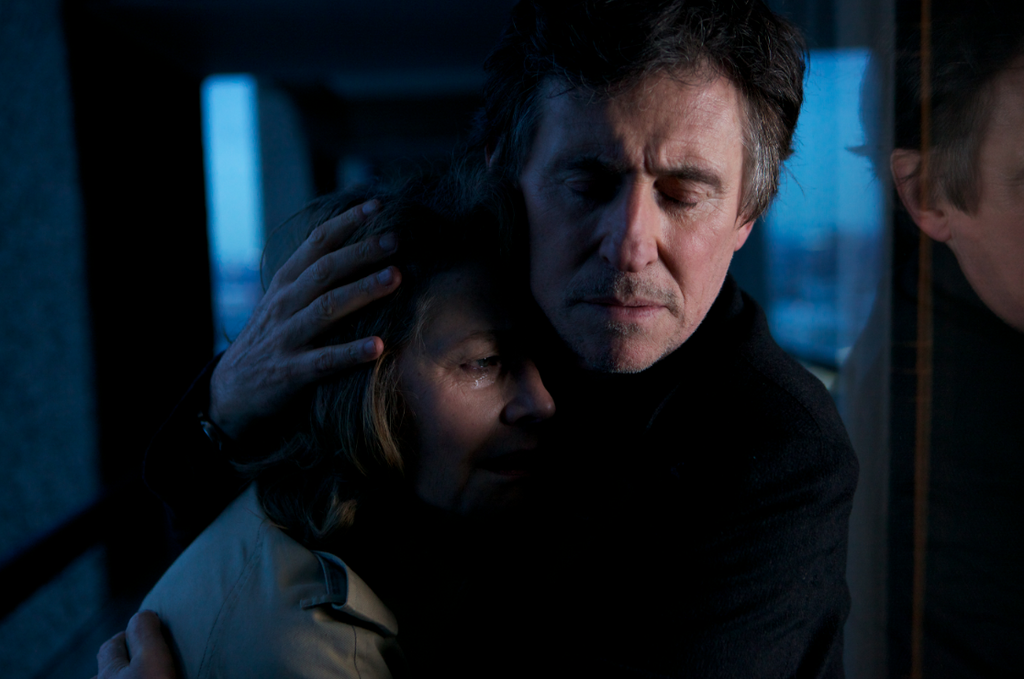 More promotional stills for the film are available in the Gallery. 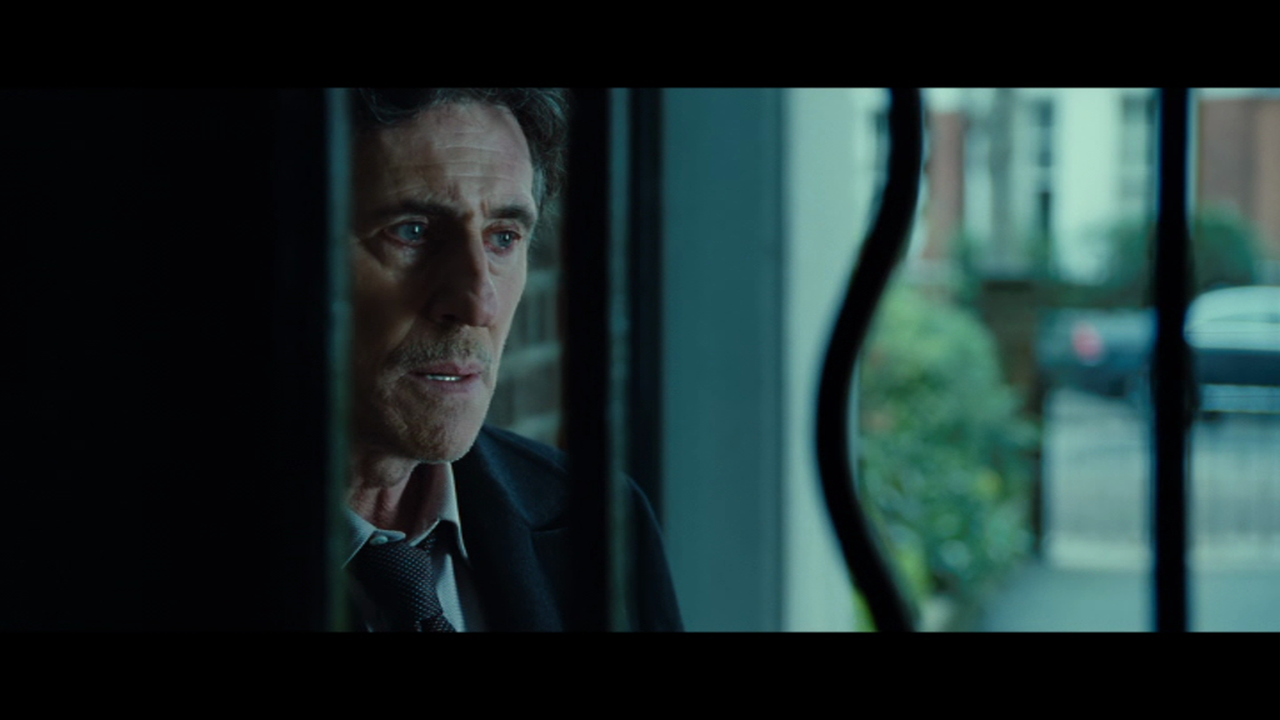 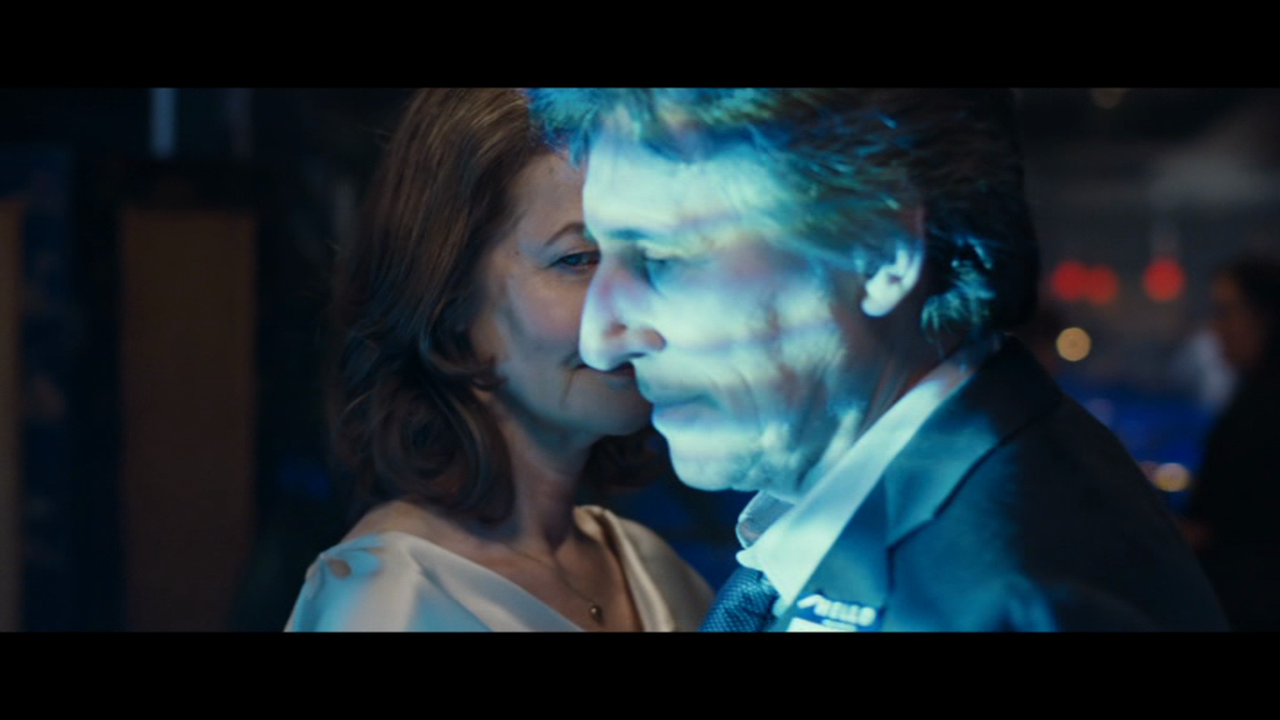 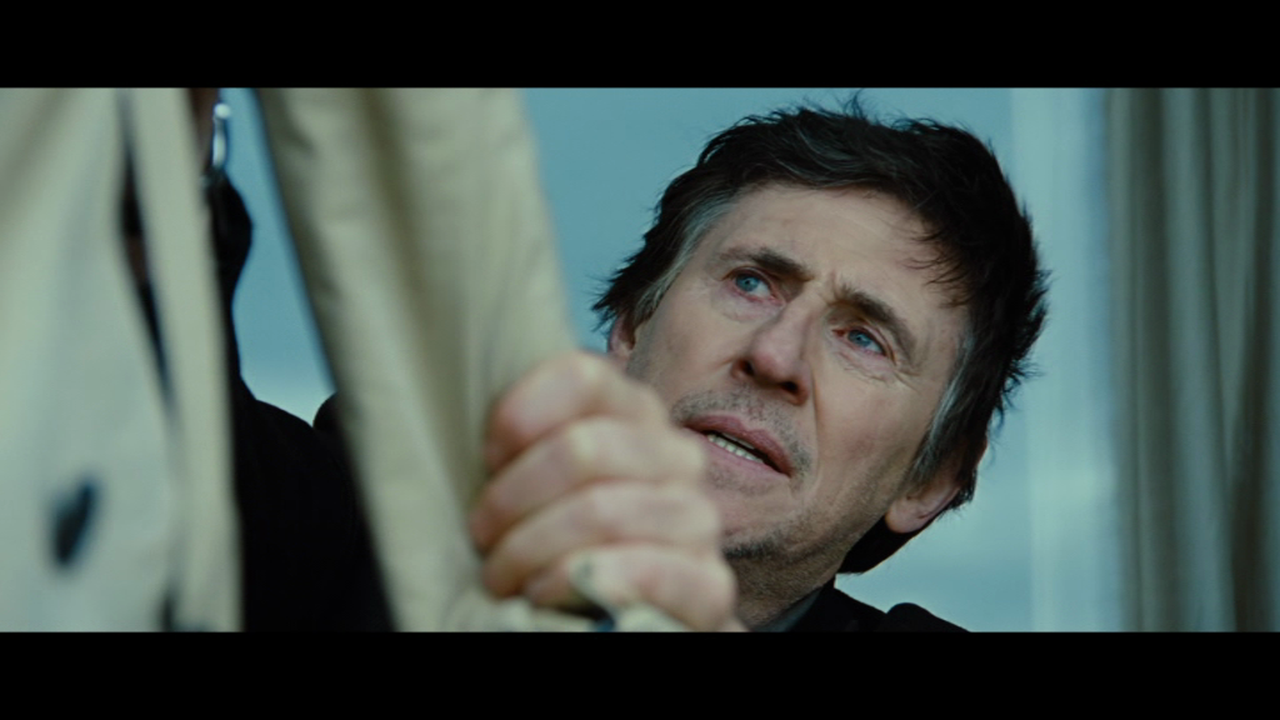 A set of 252 screencaps by Stella is in the Gallery.

Anna: Have we met before? I have a good memory for faces and you seem familiar.
Bernie: I guess I have that kind of face.
Anna: It’s a nice face.

[at the singles party]
Anna: This is your first time.
Bernie: Is it that obvious? Do you have any tips for me?
Anna: Well, I’m no expert, but the procedure seems to be: man talks to woman, may buys free drinks, man talks on and on about his great accomplishments, woman shows keen interest but remembers to emphasize her independence and self-sufficiency. And then there’s the slow dance.
Bernie: What’s the slow dance?
Anna: It’s supposed to help us overcome our inhibitions.
Bernie: And what happens after that?
Anna: And then the drinks aren’t free anymore. 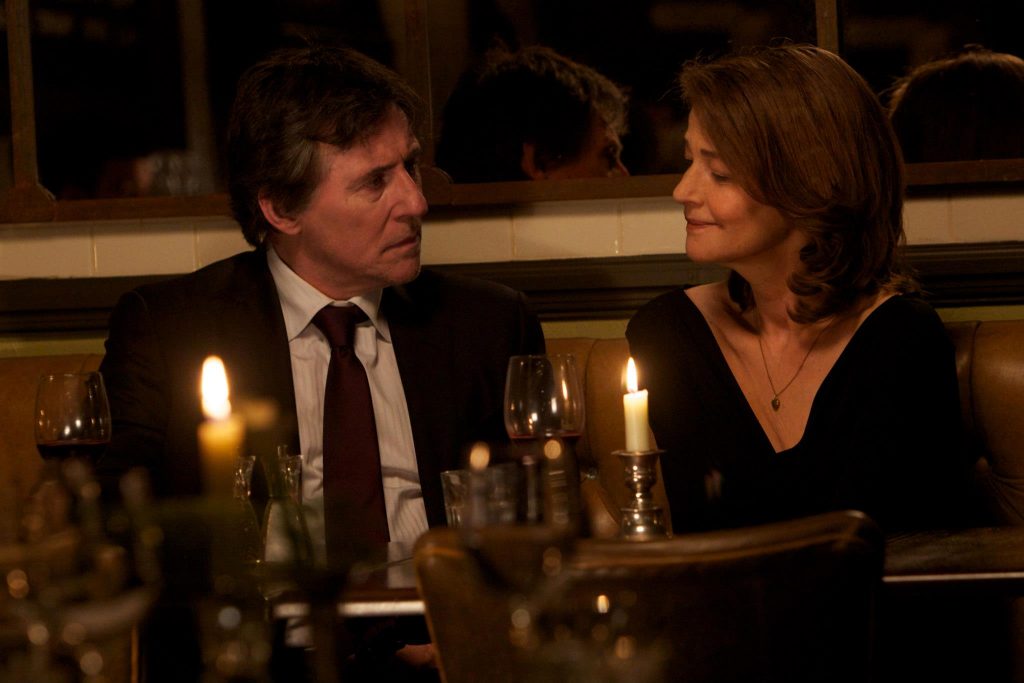 Bernie: …I’m a bit of a fraud. I’m really not the cop that people think I am.
Anna: I’m sure that behind those troubled eyes lurks a man’s obsession with the truth.
Bernie: You know, everybody, including my wife, thinks that I’m married to this job, that I’ve got this zeal for justice, but it’s always just been a job to me. I became a provider.
Anna: You got promoted.
Bernie: Because I’m diligent.

Anna: I know where you’re taking me. It’s all right. I need to do this.

Bernie: Anna, you don’t need to do this. 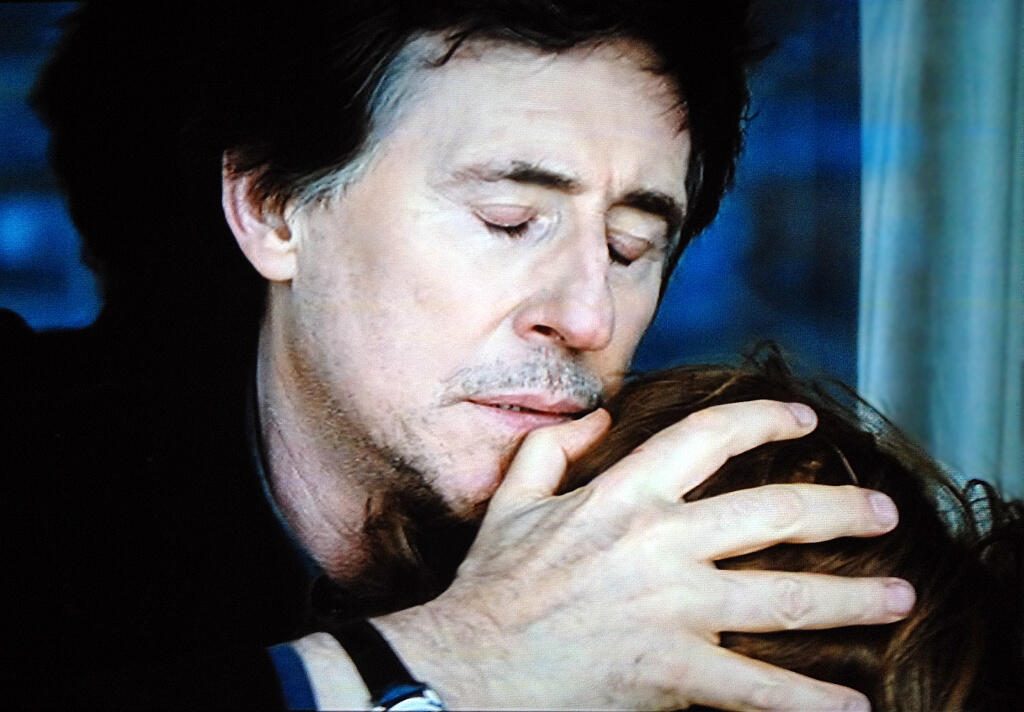 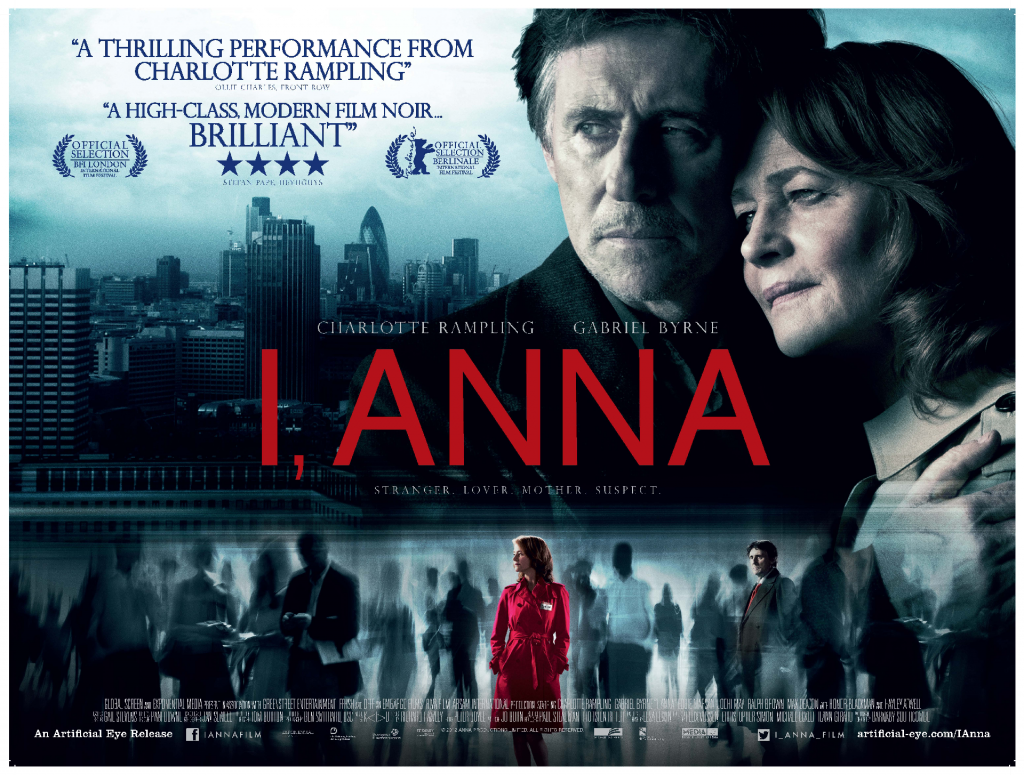 video: clip from the film

video: clip from the film 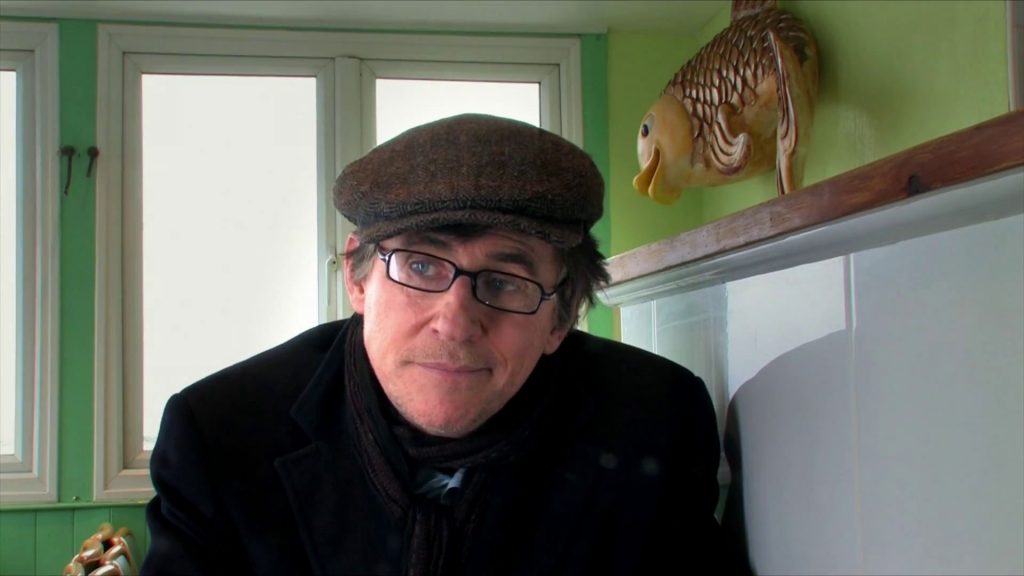 After 2 brief scenes that were included in the final film, we see Bernie (Gabriel Byrne) and Anna (Charlotte Rampling) visit a church and share a brief moment together–and Bernie tells a story.

Video courtesy of the director, Barnaby Southcombe, whom we thank! 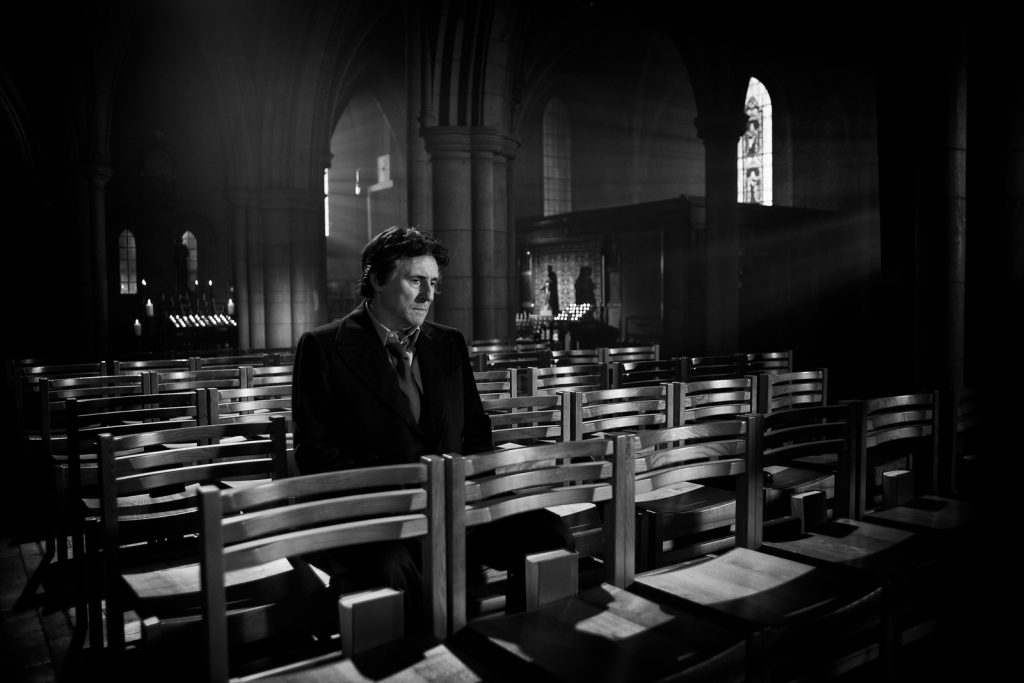 Watch the director, Barnaby Southcombe, and his technical colleagues capture the action and the emotion for the screen. We do not often get the opportunity to watch the camera behind the scenes, so enjoy! 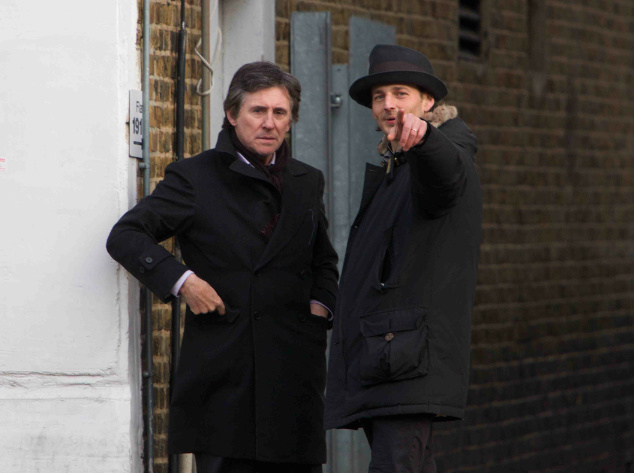 The policeman character of Bernie is played by Gabriel Byrne. He was very moved on his first reading of the script.

I had never done a thriller like this before and it was gripping and a page turner. Usually I find scripts really hard to read because they are meant to be visual, obviously, but this was very exciting. And Anna is a very well-rounded character and she is complicated and ultimately it’s a good story.

Byrne admired what Southcombe was setting out to achieve.

I liked what the ambition of the director was, to try to make a non-action film; a  noir with a European sensibility. And that appealed to me because I love European cinema and always have. The film is very much about the world of memory, mistaken identity, reality and what’s presented as reality not being that. And it’s a character piece. As an actor, I like working on characters that have internal conflicts.

The actors were drawn to the genre. Byrne explains:

Film noir to me has always had an unexpressed sense of alienation, and disconnection…And all the noir films that I like have the feeling that these are men and women who are struggling with life, and they inhabit this kind of world where violence can happen at any moment. There’s the possibility of love, but love isn’t simple. There’s always the sense of disconnection in noir films. Men believe that they’ve found something and it turns out to be an illusion. 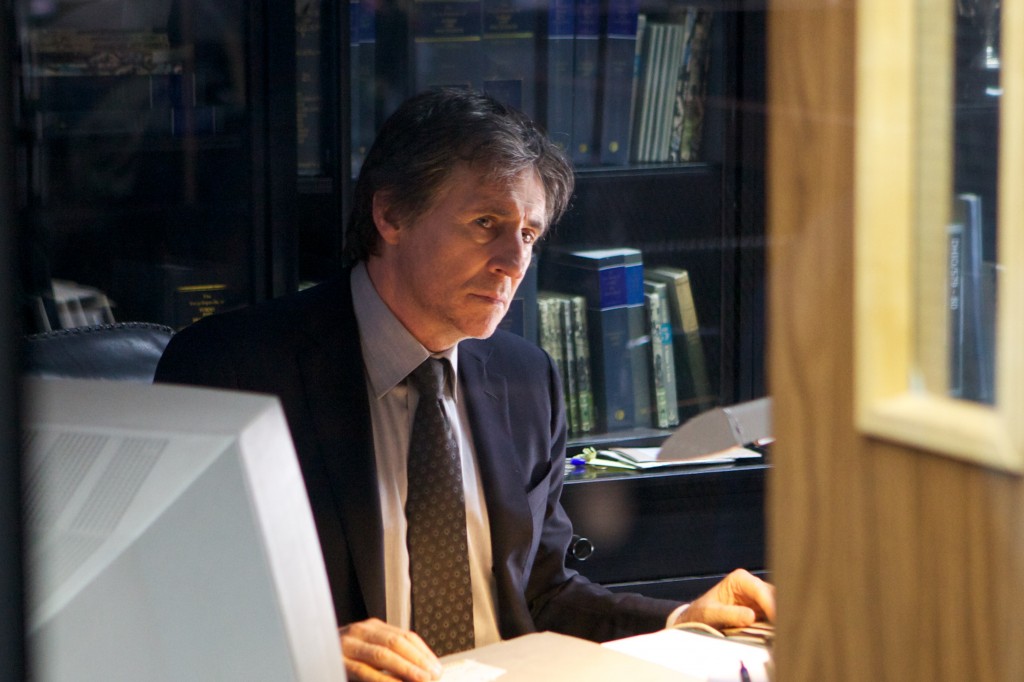 From the very outset, Southcombe had only two actors in mind to play the lead parts of Anna and Bernie: Charlotte Rampling, an actress known for being bold and taking risks, and Gabriel Byrne, with his capacity for bringing depth and compassion to a complex character. The director explains:

I couldn’t imagine doing it without either of them. As much as I was prepared to look at other actors for other important roles, in as far as cinematic partners go, it’s really important that even beyond the film you want to see two people get together. And for me it was very much a meeting of those two actors as well. That is why it was so important not only one but both of them would do it. I said I wouldn’t do the film without them, so thankfully they both agreed to do it.

Rampling shared Southcombe’s conviction that Byrne should be cast as her co-star.

I always wanted Gabriel on this film…it was Barnaby’s suggestion–I was praying he would say yes, praying that he would be free because he is absolutely Bernie to me. He is that very soulful, very uninhibited person that we needed for Bernie. When I met him I knew our relationship on screen would work.

The DVD is available through Amazon UK. 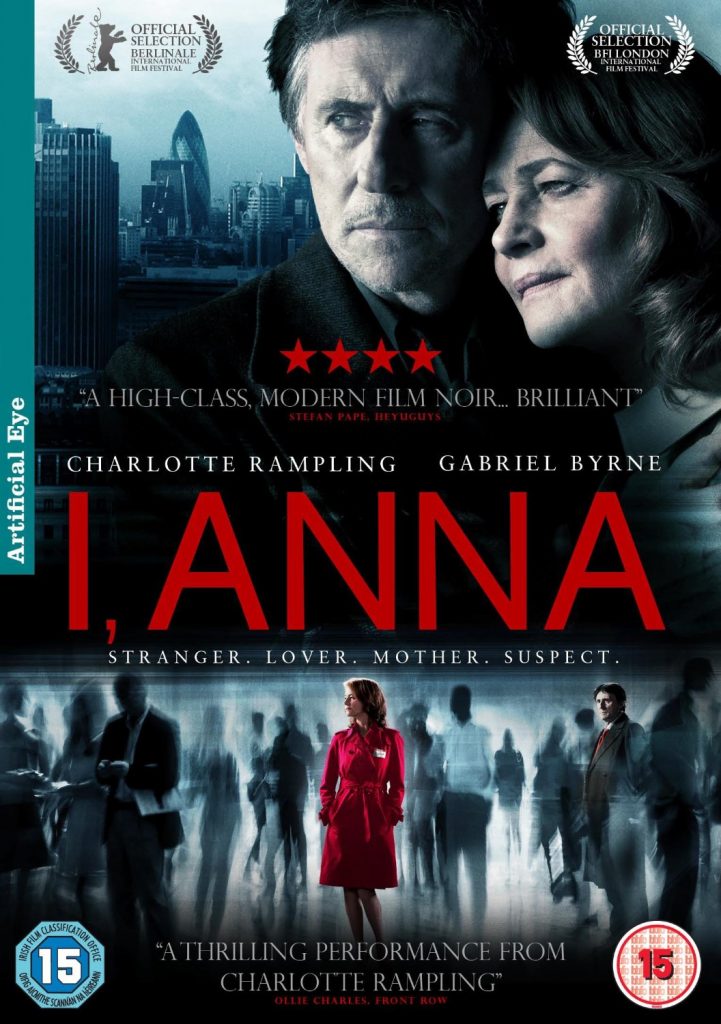 Byrne and Rampling are on top form and Hayley Atwell appears against type as Anna’s stressed single-mother daughter. The conclusion won’t please everyone, but it’s refreshingly restrained for a thriller set in today’s capital.
Verdict: A classy, enigmatic thriller that shows off contemporary London at its cinematic best.

Southcombe makes excellent use of his London locations (cavernous hotels, department stores, the sprawl of the Barbican) to show just how oppressive and alienating the city can be. Gabriel Byrne plays the crumpled detective who is both investigating Anna and is drawn to her romantically. The film is far stronger on atmosphere and performance than it is on its plotting…

Even unslept, Byrne is seriously attractive as the mumbling, heart-sore detective Bernie, as becomes obvious the minute he walks in the door at the speed dating den and the female organizer starts to swoon. His link with Anna is the unhappiness in his personal life, and the love story between the two mature protags feels convincing and possible, allowing a tough final scene to offer the necessary emotional closure the story demands. 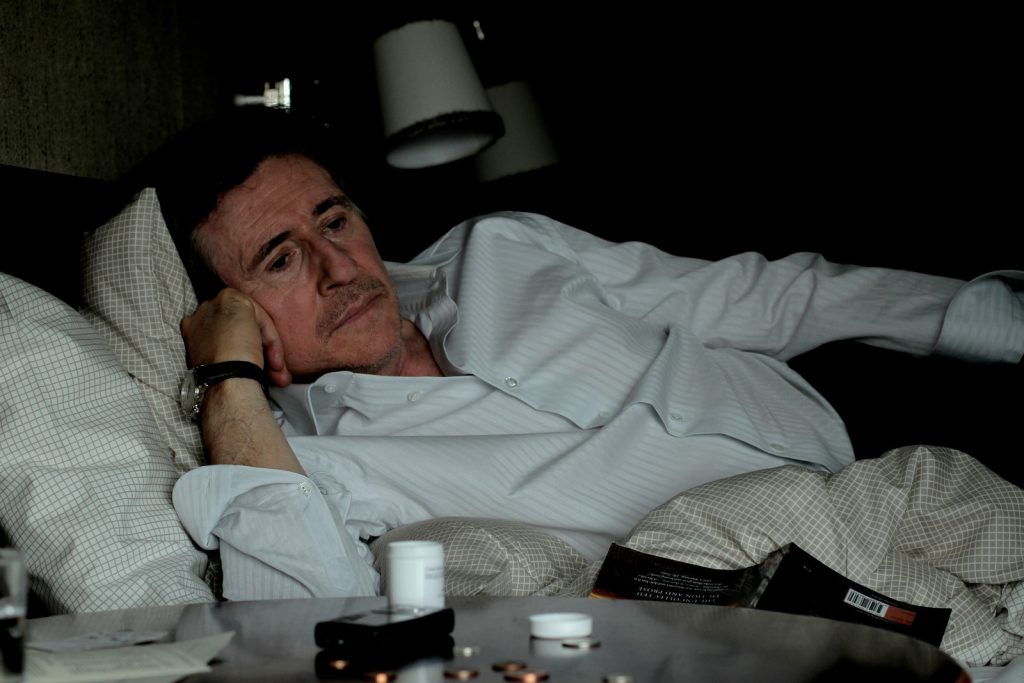 Meanwhile the performances are impressive, particularly from Rampling, representing a desirable yet vulnerable single woman, the latter enhanced by the fact she has a broken arm throughout – a result of the blurry night spent at George’s flat, also making for a series of uncomfortable scenes, as Anna scratches away at her injury: somewhat metaphorical too. The romance between her character and Bernie is endearing, as these two celebrated British performers more than prove their worth.

Yet as feature film directorial debuts go I, Anna is a very good achievement and shows Southcombe as a director able to handle a dense screenplay filled with complex characters, smart plot twists and tragically dark reveals.

In the end I, Anna will best be remembered for the pairing of Rampling and Byrne. It’s not often that either actor can headline their own film in an industry unkind to those over the age of 60. Nor is it often that either actor would appear in a film as well written and directed as this in the current stage of their careers. But their pairing in I, Anna is our gain, for these are two talents that suit each other very well. 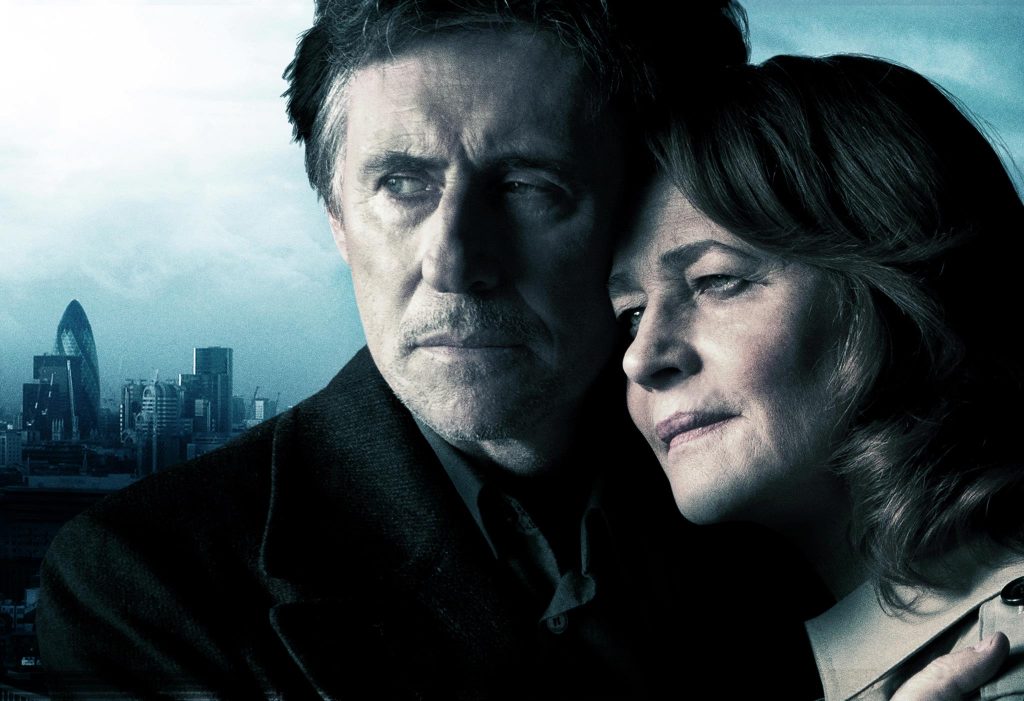 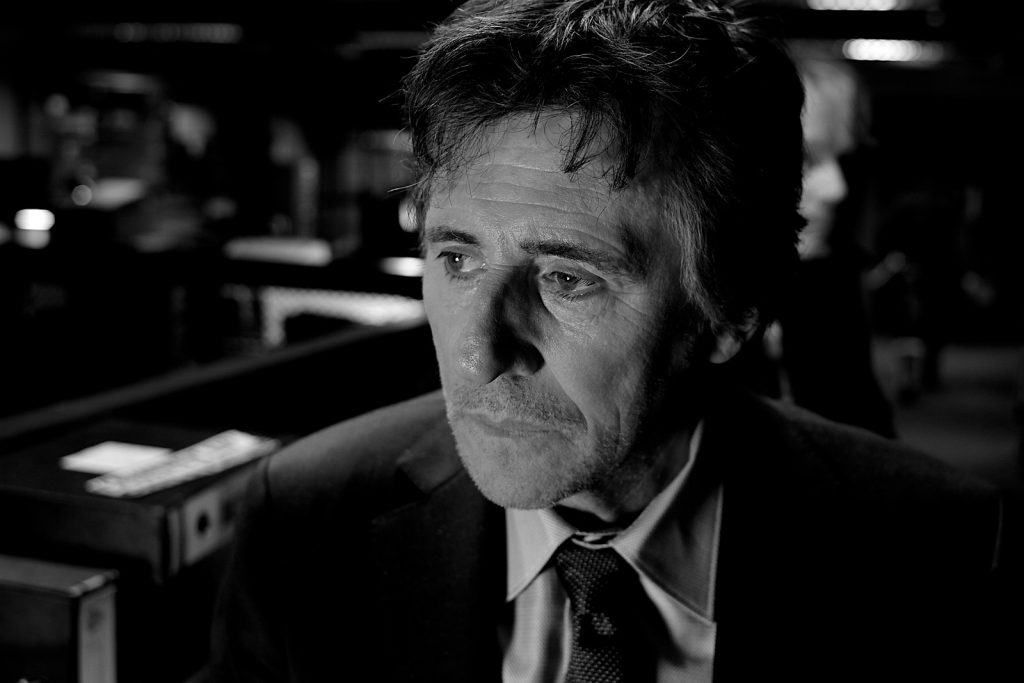 K>i<D stands for Keep It Dark. This French electronic duo is comprised of J.M. Derain and David Braud who bring their respective talents in sound design and live musicianship to create a new form of musical collaboration. Their musical repertoire has extended through theatre, art installation, fashion and film music supervision. I, ANNA marks their first fully composed film score.–from the production notes for the film

There are four songs by Richard Hawley included in the film: Precious Sight, Cry a Tear for the Man on the Moon, Tonight, and Coming Home.

Read more articles at Byrneholics about I, Anna 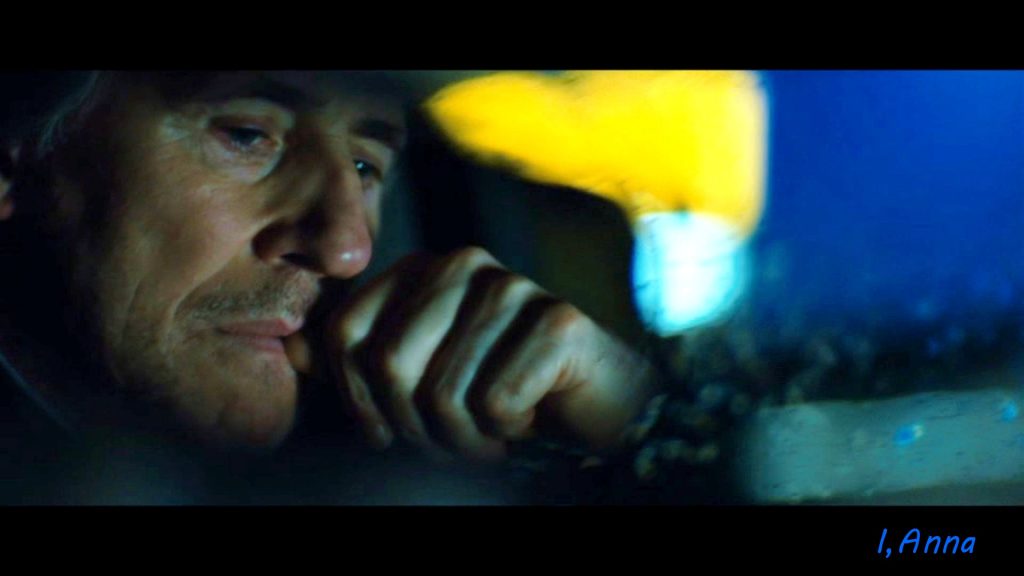 Many thanks to my anonymous friend for the Production Notes, to Artificial Eye Film for the clips, and of course to director Barnaby Southcombe!