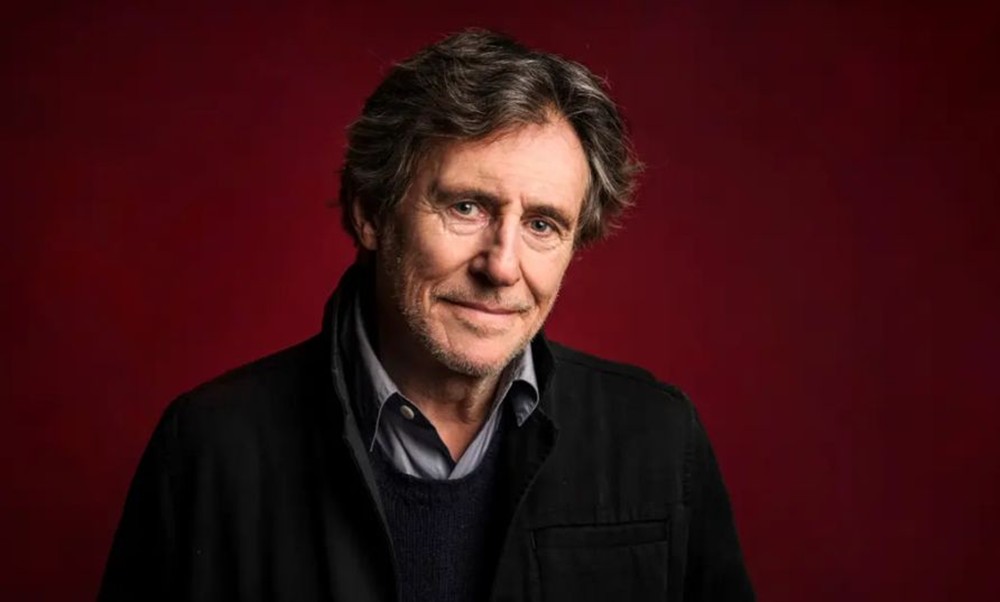 Portrait by Linda Nylind for The Guardian

Once Upon a Time in Hollywood:  Actor Gabriel Byrne talks to Sarah Halliwell about his new memoir which traces his route from Dublin to Hollywood with humour and honesty. By Sarah Halliwell for The Gloss, December 28, 2020

Gabriel, from his home in Maine, talks with Niall Burgess, Secretary General at the Department of Foreign Affairs in Ireland, about his memoir Walking With Ghosts, what it really means to be Irish abroad, and the significance of ‘home’. December 23, 2020:

Gabriel, from his home in Maine, talks with Sarah and Trevor at The Little Museum of Dublin, December 19, 2020:

Gabriel Byrne: How Acting In The Riordans Prepared Me For Hollywood Fame. Audio interview on The Last Word with Matt Cooper, November 16, 2020

Gabriel Byrne: ‘There’s no such thing as an ordinary life’ There’s nothing better than a good yarn and finding out what makes someone who they are, and acting legend Gabriel Byrne has written a touching memoir about just that, called Walking With Ghosts. The Chris Evans Breakfast Show on VirginRadioUK, November 16, 2020 (highlights only, no audio)

Gabriel Byrne on abuse, alcoholism and his new memoir. By Teddy Jamieson for The Herald, Scotland, November 15, 2020

Gabriel Byrne: ‘One teacher had 14 words for stupid and called me each one’. Gabriel Byrne panicked and ran when The Usual Suspects was a big hit at Cannes. It was only when writing his memoir Walking With Ghosts that he realised why. By Tommy Conlon for Independent.ie, November 15, 2020

Gabriel Byrne on The Ray D’Arcy Show. Since leaving home at the age of 11 to train in an English seminary, his life has been far from ordinary, and has now written down some of the stories that he has accumulated over his 70 years. He joined Ray to tell us more about his memoir “Walking With Ghosts.” Audio interview/podcast on The Ray D’Arcy Show, RTÉ Radio 1, November 2020

Gabriel Byrne: Every life is extraordinary. Gabriel Byrne on listening, and why for him sometimes there is no resolution to trauma. Audio interview on BBC Radio 4 Saturday Live, November 14, 2020

Gabriel Byrne: ‘Dublin prepared me for Hollywood. I was ready for the bulls**t’ In his new memoir, Walking with Ghosts, the actor tells of his struggle with fame and of the sexual abuse he endured while training for the priesthood, and reflects on a rapidly changing Ireland. By Donald Clarke for The Irish Times, November 14, 2020

The Verb on ‘green’ memoir – with the actor and writer Gabriel Byrne, and the poets Elizabeth-Jane Burnett and Pascale Petit. What would our stories sound like if we told them through our relationships with the plants, animals and landscapes that are most dear to us? What happens when we start to see the natural world as an integral part of our own histories? Audio interview hosted by Ian McMillan on BBC Sounds, November 13, 2020

Gabriel Byrne: “There’s a shame about men speaking out. A sense that if you were abused, it was your fault.” The actor’s autobiography confronts the abuse he experienced at the hands of the church. But he has just as much contempt for Hollywood – and US presidents from Obama to Trump. By Catherine Shoard for The Guardian, November 8, 2020 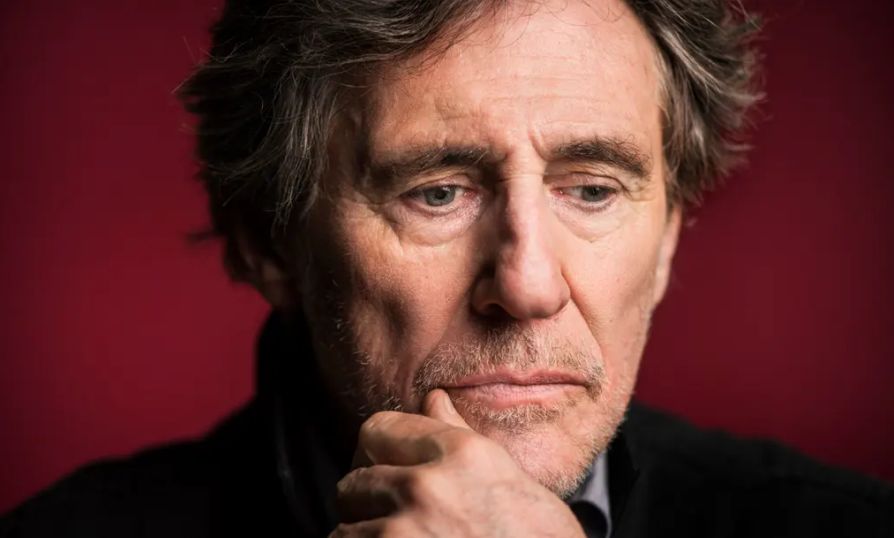 Portrait by Linda Nylind for The Guardian

To celebrate Gabriel’s milestone birthday in May, two interviews were published:

‘I have demons I wrestle with … I’ll never defeat them but I try to keep them at bay’ – Gabriel Byrne on turning 70 by Barry Egan for Independent.ie, May 17, 2020 (behind a paywall)

Gabriel Byrne at 70: Revisiting a Classic Interview by The HotPress News Desk, May 12, 2020
“As Gabriel Byrne celebrates his 70th birthday, we’re revisiting one of his classic interviews with Hot Press. In this powerful 2016 interview, he tells Roe McDermott why we should charge multi-nationals more for doing business in Ireland; talks about sexism in Hollywood; Donald Trump; and excoriates the political classes in Ireland…”

War of the Worlds cast on updating a classic: ‘It’s extremely pertinent to the world we live in today’ by Alex Fletcher for BT.com, March 6, 2020
Gabriel Byrne, Elizabeth McGovern and the cast of the sci-fi series take us behind the scenes on their thrilling adaptation of the HG Wells classic. 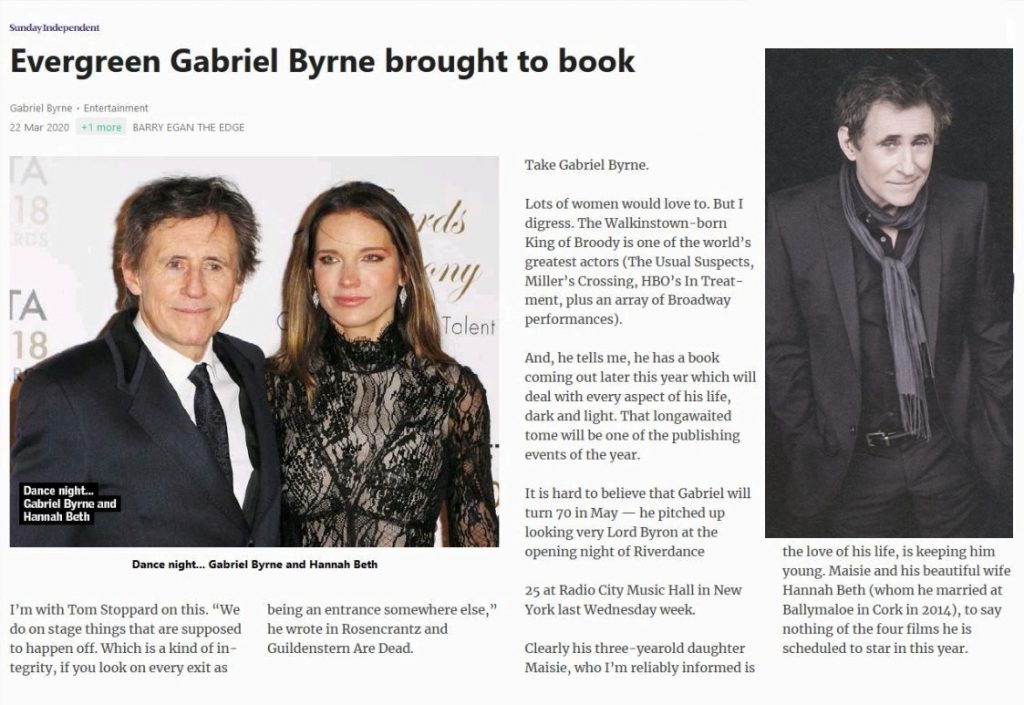 Gabriel Byrne, the Survivor by Claire Stevens for Paris Match, November 4, 2019. This interview is in French. There is an English translation, however!

Behind the Scenes With Gabriel Byrne, Elizabeth McGovern on ‘War of the Worlds’ by Ben Kroll for Variety, October 14, 2019

“Gabriel Byrne is a true acting great – star of Miller’s Crossing, The Usual Suspects and Stigmata , not to mention his Golden Globe winning TV roles and stunning Broadway performances. As a former victim of clerical abuse, he talks to us about the Papal visit, Ireland’s relationship with Catholicism, and the time he met Muhammad Ali.”

Please note: the RTE Player can be difficult to get working. Be sure you have Flash loaded in your browser. You will have better luck if you use Chrome and not other browsers for this purpose. This podcast is available on other podcast platforms like SoundCloud, BUT this episode with Gabriel is not. So you are stuck with the RTE Player. Sorry.

Gabriel Byrne’s appearance on the Late Late Show moved the nation by Rebecca Keane for The Irish Post, February 17, 2018

Gabriel Byrne on his alcoholism: ‘One day I woke up and I said, if I don’t stop this, I am going to die’ by Caitlin McBride for Independent.ie, February 17, 2018

Gabriel Byrne on Weinstein: ‘He was a violent bully. He had such power’ / The Dublin actor on sex harassment, and why fame is like being trapped in a drum, by Tanya Sweeney for The Irish Times, February 17, 2018

Gabriel Byrne on why he’s ‘unapologetically’ pro-choice by Fionnuala Moran for Goss.ie, February 15, 2018

Gabriel Byrne: People coming in and making films in Ireland cheaply–that’s not an industry interview for The Journal.ie, February 16, 2018

Paul Jay interviewed Gabriel for Reality Asserts Itself at The Real News during the holidays.

The four videos in this posting are each about 22 minutes long. Parts 1 – 3 focus on Gabriel’s experiences growing up in Ireland, becoming an actor, and developing his political views. Part 4 is about climate change, an increasingly important issue dear to his heart.

Life as an Aging Actor: Interview with Gabriel Byrne, Donna Murphy, and Lee Wilkof talking about their film No Pay, Nudity on the Leonard Lopate Show, February 14, 2017:

Gabriel Byrne: Confessions of a Contender: The Tony Awards Best Actor nominee talks to Max McGuinness about success, prizes and Catholic guilt, by Max McGuinness for Financial Times, May 27, 2016

Gabriel Byrne: “Acting is really all about being yourself,” by James Mottram for The Belfast Telegraph, April 23, 2016

Gabriel Byrne: “There’s a difference between a great star and a great actor”, by Donald Clarke for The Irish Times, April 21, 2016

Of Booze, Brutal Honesty and Family: Long Day’s Journey Into Night, by Alexis Solosky for The New York Times, April 19, 2016

Gabriel Byrne takes look back at life in “Louder Than Bombs”, by Stephen Schaefer for Boston Herald, April 17, 2016

Gabriel Byrne has every reason to be enjoying life ahead of his new film, by Helen Barlow for The Irish Examiner, April 15, 2016

Gabriel Byrne on Miller’s Crossing, Dead Man, and The Usual Suspects, by Sam Fragoso for The AV Club, April 4, 2016

Gabriel Byrne called local radio show KCLR Live in Ireland on August 6, 2015 and talked to John Masterson. Gabriel shared his passionate views in favor of keeping the Barrow Way just as it is…and he discussed his work on In Treatment as well!

Róisín Ingle talks with Gabriel Byrne about the new book Sons+Fathers and other topics as part of her Róisín Meets podcast series for the Irish Times, June 19, 2015:

Gabriel Byrne on romance, privacy, and the end of the world, by Catherine Shoard for The Guardian, May 28, 2015 (interview at Cannes)

‘I was abused – now I’m tackling it on TV’: Gabriel Byrne’s had painful personal experience of the murky world at the heart of his new drama, by Tim Oglethorpe for Daily Mail (UK), May 16, 2014

Gabriel Byrne: The Art of Stillness, by Michael Dunaway for Paste Magazine, April 1, 2014

Gabriel Byrne: Corporations Are the New Dictators, by THR Staff for The Hollywood Reporter, December 5, 2013

‘It was almost a Taliban-esque society’: Gabriel Byrne goes crashing into the past in ‘Quirke’, by Gerard Gilbert for The Independent UK, September 22, 2013

Gabriel Byrne: Religion Didn’t Do Me Any Good, by Nigel Farndale for The Telegraph, April 5, 2013

The HeyUGuys Interview: Gabriel Byrne on Tarantino, The Coens and All Things to All Men, by Jon Lyus, April 5, 2013

Byrne describes Catholic Church as ‘force for evil’, by Nick Bramhill for The Irish Times, March 31, 2013–this interview is now behind The Irish Times paywall

Brooding? I don’t even know what that means, by Hadley Freeman for The Guardian, April 25, 2011

Gabriel Byrne Surveys America’s Problems, by Henry Giardina for Bullett Magazine, November 8, 2011. The complete interview is no longer available. Bullet Magazine has closed its doors, unfortunately. Part of the interview and the accompanying images can be enjoyed at this posting for it.

Gabriel Byrne: In My Library, by Barbara Hoffman for The New York Post, June 12, 2011

Imagining Ireland With Gabriel Byrne, by Sheila Langan for Irish Central, May 12, 2011

Comfortable But Not Too Familiar, by Amy Chozick for The Wall Street Journal, October 26, 2010

All Ears: How Gabriel Byrne turns listening into eloquence on HBO’s In Treatment, by Emily Nussbaum for New York Magazine, October 24, 2010

Is Gabriel Byrne a suitable case for treatment? by Amy Raphael for The Guardian, October 16, 2009

Gabriel Byrne: Talk To Me by Alex Simon for Venice Magazine, April 2009

Gabriel Byrne and The Art of Listening by Terry Gross for NPR’s Fresh Air, April 30, 2009

On the couch with Gabriel, by Barry Egan for the Belfast Telegraph, April 10, 2009

An actor with a lot on his mind, by Belinda McKeon for The Irish Times, February 7, 2009

Gabriel Byrne, by John Maguire at his blog Confessions of a Film Critic, February, 2009

Gabriel Byrne: Talent to Byrne, from the Movieline Vault, July 1, 1992

Audio interview and transcription from The Last Word Interview (November 2012)

Gabriel Byrne And The Art Of Listening, by Terry Gross for Fresh Air/NPR, April 30, 2009 [transcript available]

Video interview with Charlie Rose, including transcript: Wednesday 03/05/2008 Actor Gabriel Byrne focuses on his newest role playing a psychotherapist tending to his patients while his own life unravels in HBO’s “In Treatment.” 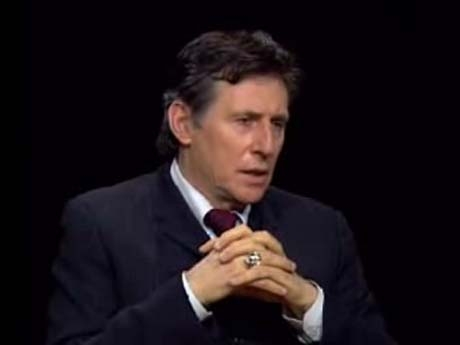 Link to the Press Archive, in the Gallery, where you can find scans of print interviews with Gabriel, as well as film and TV reviews, from 1981 to the present.