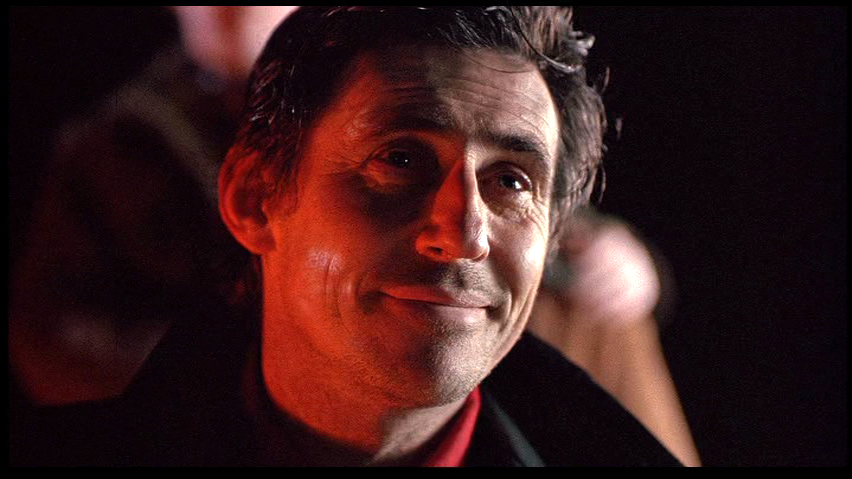 Directed by Mike Newell
Writers: Jim Sheridan and David Keating; based on a story by Michael Pearce

When two brothers rescue a magical horse, it will lead them on the adventure of a lifetime.

Accused of a crime they didn’t commit, two city kids and a magical horse are about to become the coolest outlaws ever to ride Into The West.

Mike Newell directs Jim Sheridan’s screenplay (based on a story by Tim Palmer) in this enchanting and magical modern-day fairy tale. Gabriel Byrne plays Papa Reilly, a widower who lives with his two young sons, Ossie (Ciaran Fitzgerald) and Tito (Ruaidhri Conroy), in the slums of Dublin. There seems to be no hope for their bleak existence until the children’s grandfather (David Kelly) arrives. Accompanying him is a beautiful and imposing white stallion named Tir na nOg, a magical creature from ancient Irish legends. The stallion takes a shine to the boys and they love the horse in return. But a legion of corrupt police plot to impound the horse for the purpose of selling it to a rich businessman. Ossie and Tito sneak off to rescue Tir na nOg. Grabbing the stallion, they get their father and, as the police chase after them, they make their way west. ~ Paul Brenner, Rovi

Into the West is a film about two young boys, Tito (Conroy) and Ossie (Fitzgerald), whose father (Byrne) was “King of the Travellers” until his wife, Mary, dies during the birth of their second son, Ossie. The boys’ grandfather (David Kelly) is an old story-telling Traveller, who regales the children with Irish folk-tales and legends. When he is followed by a beautiful white horse called Tír na nÓg (meaning “Land of Eternal Youth” in Irish), from the sea to Dublin, where the boys and their father now live, the boys are overwhelmed with joy and the dreams of becoming cowboys. The horse is stolen from them and they begin their adventure to get their mystical horse back. They escape the poverty of a north Dublin council estate, and go “Into the West” where they find that Tír na nÓg is not just a horse.~ Wikipedia

151 screencaps provided by Daniela are in the Gallery. 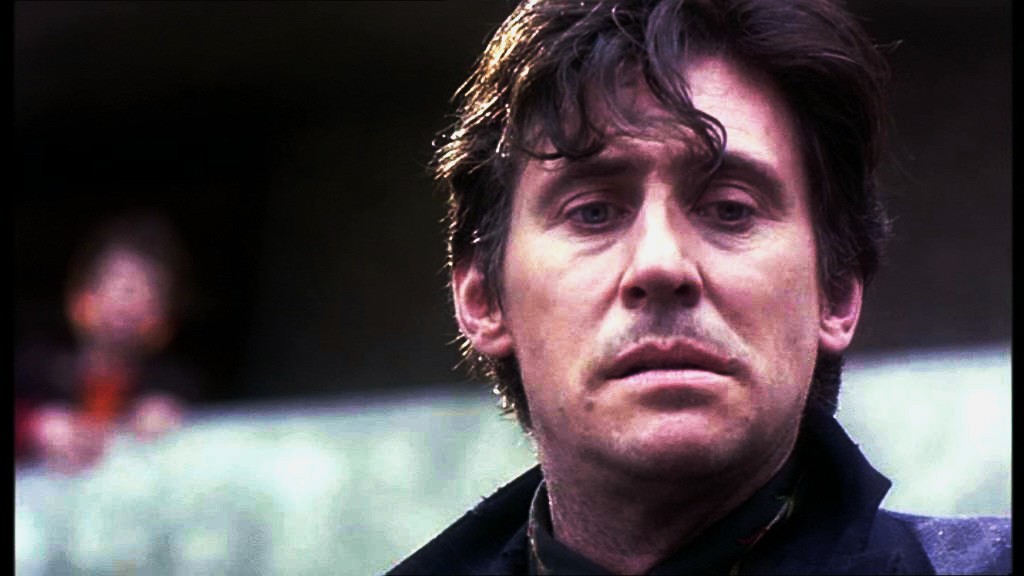 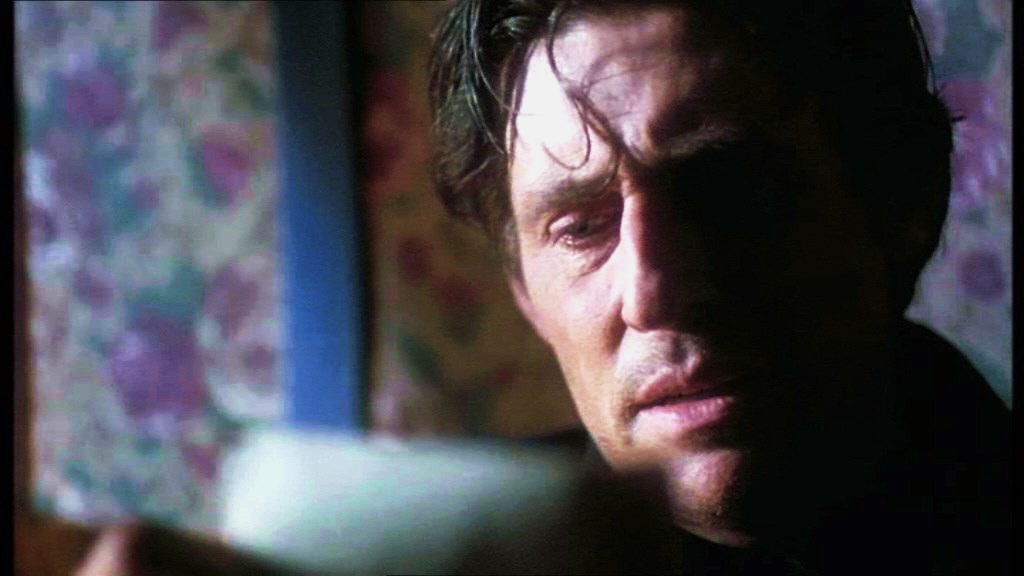 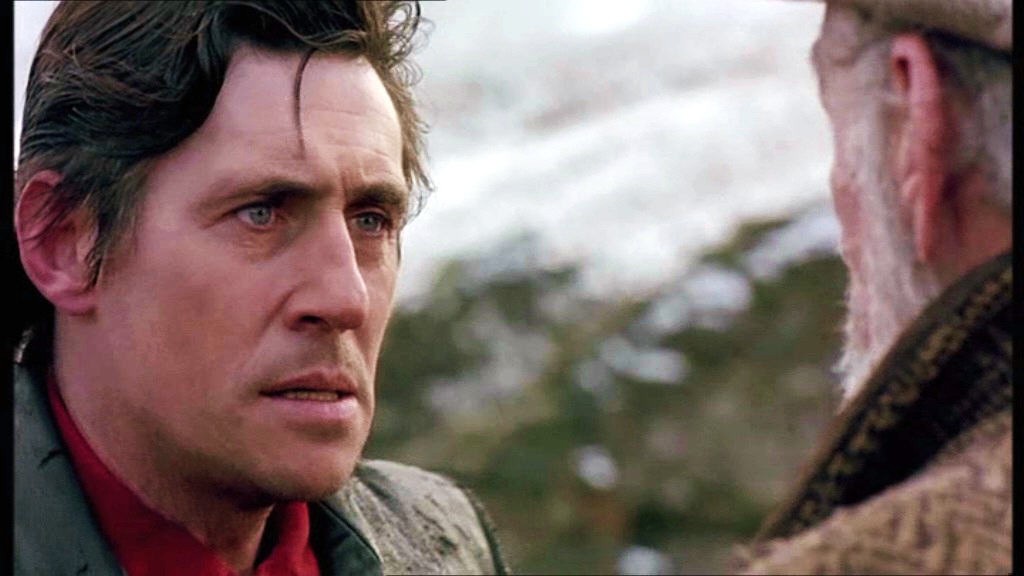 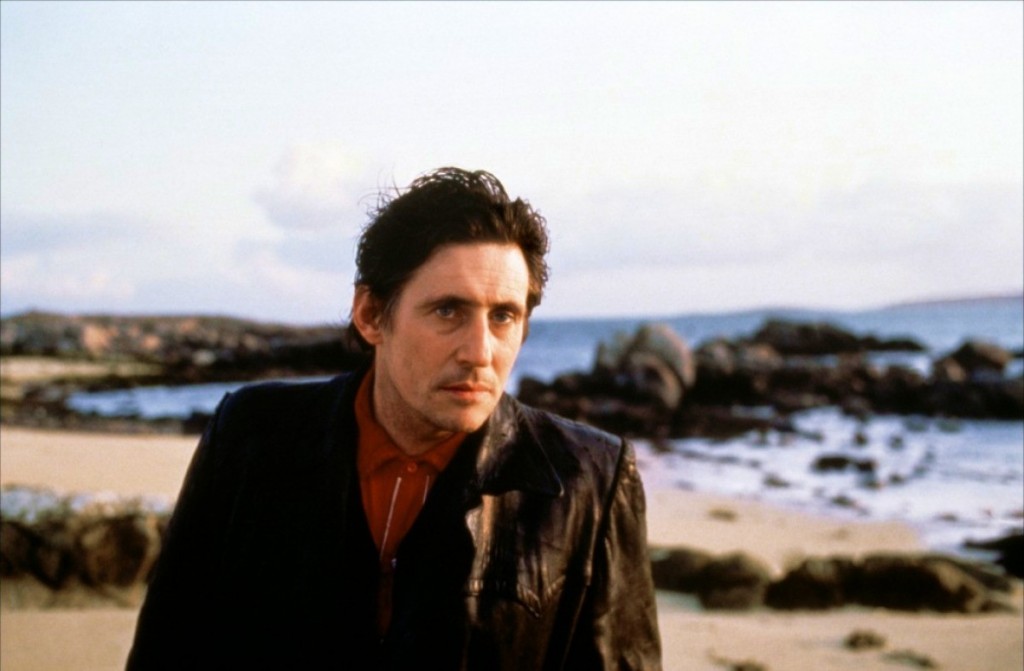 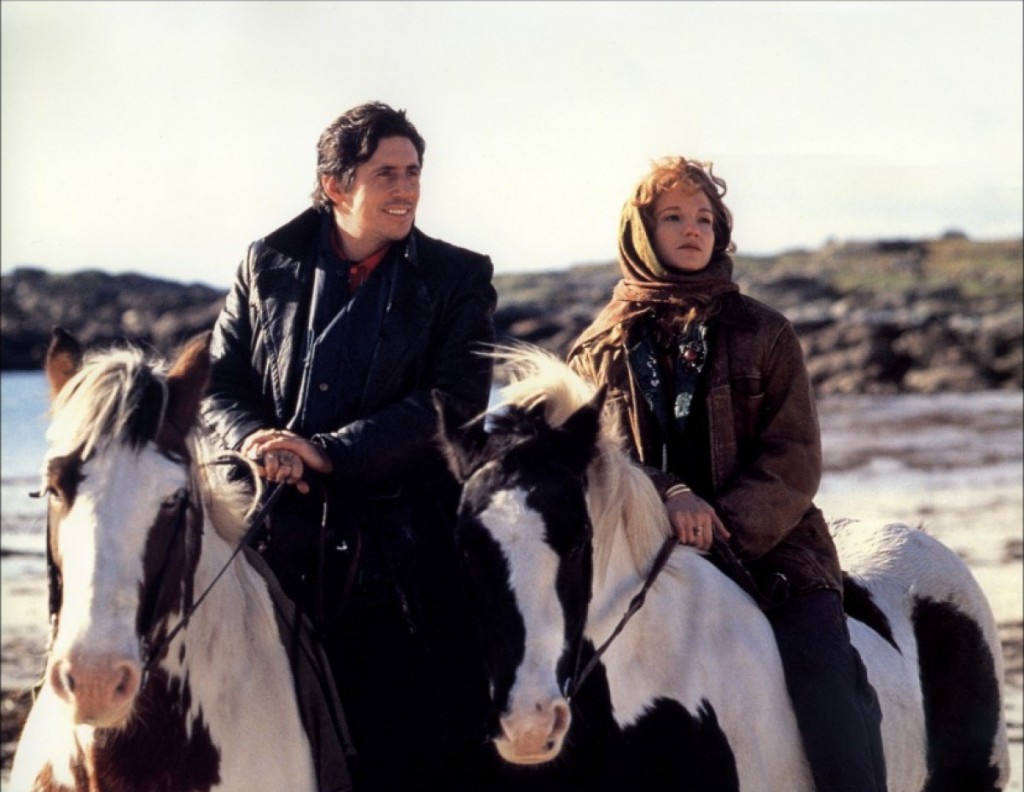 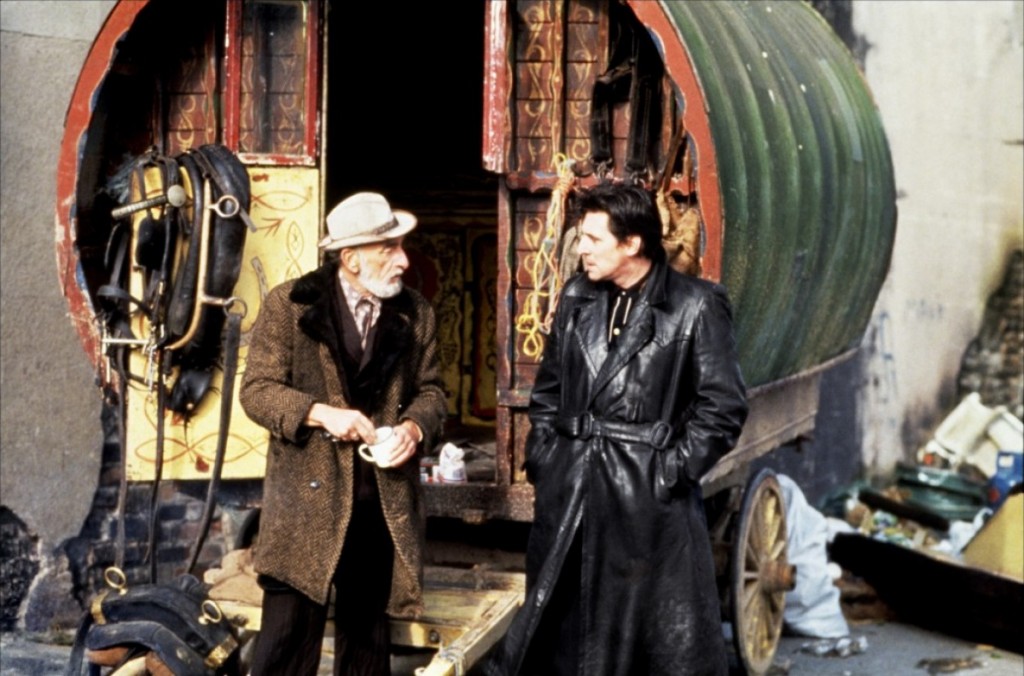 Ossie: What’s his name?
Grandfather: He’s called Tír na nÓg.
Ossie: But why’s he called that?
Grandfather: Because he came from a land under the sea.

Papa Reilly: There’s a bit of traveler in all of us. But very few of us know where we’re going. 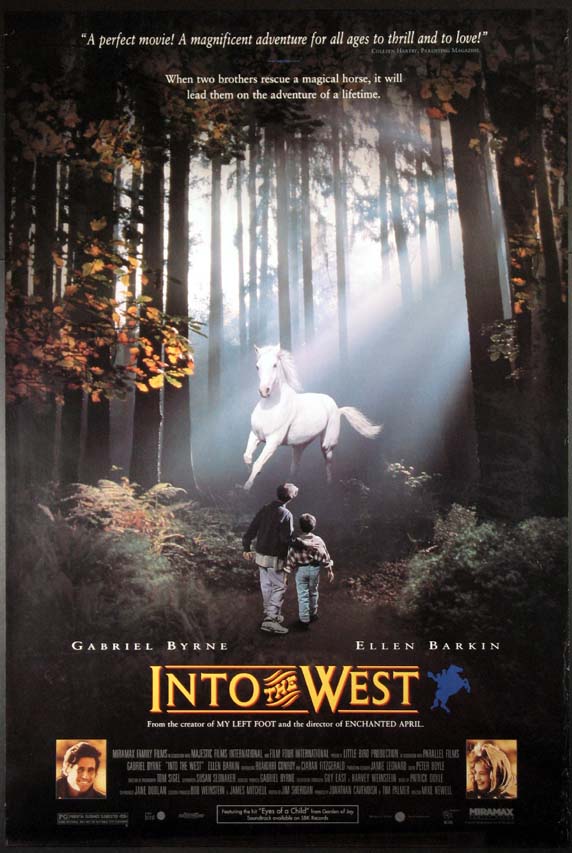 LL: How did you manage to get your film Into the West produced?

GB: It’s a story I had been attracted to for years–a friend of mine in Dublin had come upon it–and I basically brought the script to Miramax and they got on board. It’s a poetic fantasy about two children and this white horse who comes from the sea to lead them on a strange and mysterious journey.

GB: Yes. And the father tries to follow. The mother is dead, you see, and he has lost contact with…with life, really, because of his grief. It’s set among the gypsies of Ireland, and the entire cast is Irish, except for Ellen, who plays a sort of a good witch who helps the father on his search. She has access to the ancient lore of travelers, ancient wisdom.

LL: Does Ellen do an Irish accent?

GB: Yes. She does it really well, too. 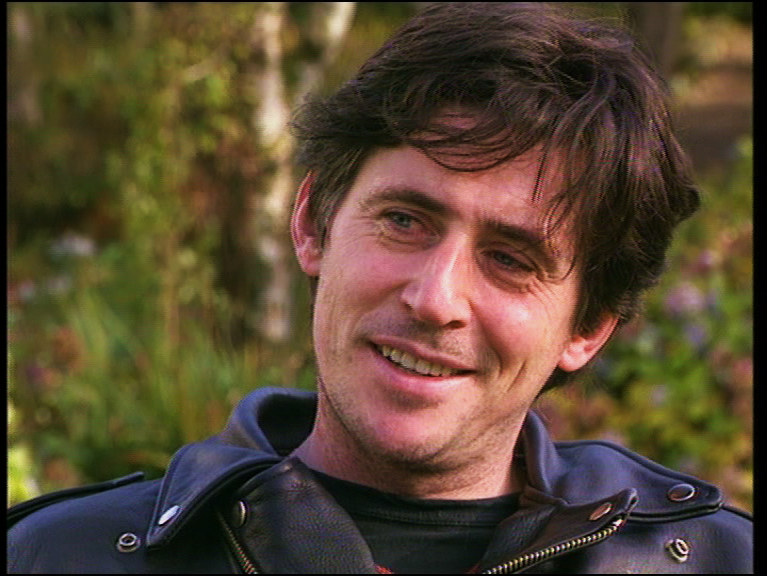 making of Into The West

The subtext of the movie involves the gypsy culture in modern Ireland. Known also as tinkers and travelers, the gypsies are often discriminated against, and charged with any crimes that take place even vaguely near to them. For their grandfather (David Kelly), the traveling life is still rich and satisfying, but for their father (Gabriel Byrne), it has been replaced by a form of imprisonment in a high-rise ghetto. The father enlists two friends (Ellen Barkin and Colm Meaney), who remind him of the ancient strengths of the travelers, and what is regained is not only a horse, but a family and a tradition.

Picturesque and warm-hearted, “Into the West” moves enjoyably toward the inevitable family reconciliation, and an ending with a supernatural spin. Along the way, it manages to sustain a high level of interest, thanks to fine acting and plenty of local color. Mr. Byrne seems fully engaged by his role, and he brings Papa Riley vigorously to life; this father’s flashing eyes and black moods give “Into the West” something other than the usual family-film aura.

With only a few detours into blarney, Sheridan and director Mike Newell (Enchanted April) steer a steady course to the heart. It’s fun to watch Kathleen put a spark back into Riley’s haunted eyes. Byrne and Barkin, married in real life, give their roles a piercing urgency. And cinematographer Tom Sigel catches the mournful beauty of an Irish winter. But it’s the scenes of the boys on horseback, riding this moonbeam of a movie to a fairy-tale ending, that provide the essential ingredient: a sense of wonder. 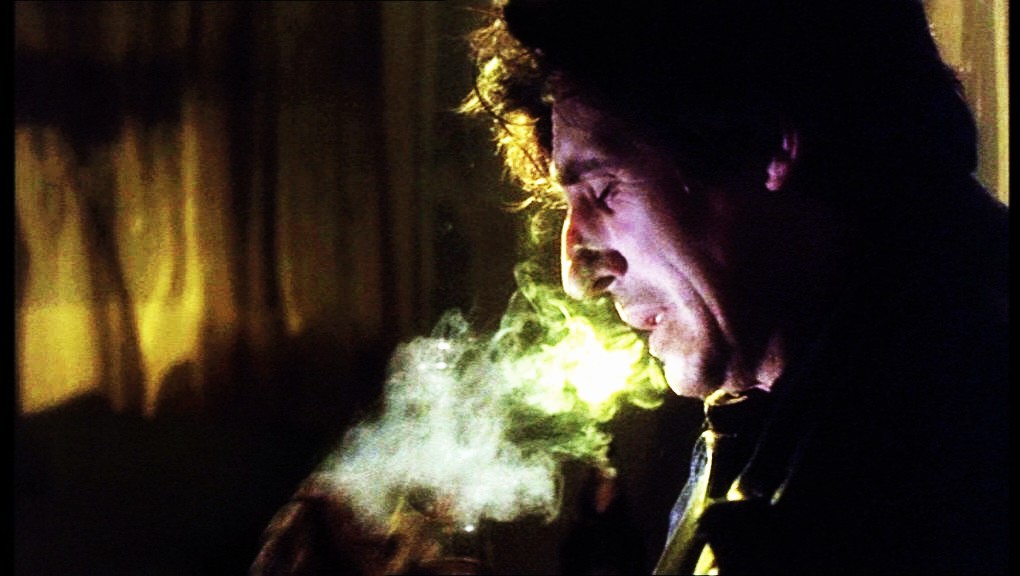 Child actors Ciaran Fitzgerald and Ruaidhri Conroy submit performances that are captivating and true, especially impressive because they have only each other to play off for large stretches of the movie. Their interactions are key to sustaining tension in a dozen different scenes. The supporting work of Gabriel Byrne as their father shouldn’t be overlooked, either. Byrne goes against type as a layabout and low-level grifter, a generally uneducated man whose intense grief and resignation make the mere prospect of fatherly attentiveness seem impossible. Yet he’s got as much to learn on this journey toward Tir na nOg as his sons, and as the movie progresses, it’s clear exactly how much Byrne has invested us in his character. The result is a movie with its sorrows and its triumphs, its quiet and its whimsy, neither too heavy for children nor too slight for its deeper-thinking audience.

One day in the gray towers of Dublin, a gorgeous white horse shows up to take the boys on the adventure of a lifetime. I fell in love with the boys, their spirits and their ability to breathe life back into their father. OK, I liked the horse, too. 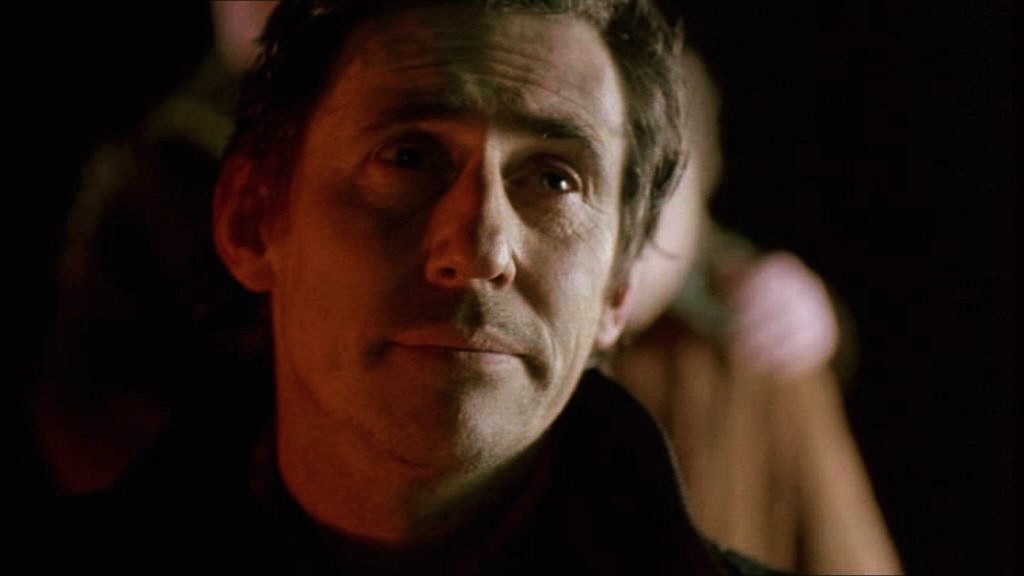 inspired by Into The West

This narrative poem takes the form of a dialogue between the aged Irish hero Oisín (pronounced “Usheen”) and St. Patrick, the man traditionally responsible for converting Ireland to Christianity. Most of the poem is spoken by Oisin, relating his three-hundred year sojourn in the isles of Faerie.

Oisín (Old Irish, pronounced [ˈɔʃiːnʲ], roughly uh-SHEEN; often anglicised to Ossian or Osheen), son of Fionn mac Cumhaill and of Sadhbh (daughter of Bodb Dearg), was regarded in legend as the greatest poet of Ireland, and a warrior of the fianna in the Ossianic or Fenian Cycle of Irish mythology.[1] He is the narrator of much of the cycle. In Oisín in Tir na nÓg, his most famous echtra or adventure tale, he is visited by a fairy woman called Níamh Chinn Óir (Niamh of the Golden Hair or Head, one of the daughters of Manannán Mac Lir, a god of the sea) who announces she loves him and takes him away to Tir na nÓg (“the land of the young”, also referred to as Tir Tairngire, “the land of promise”). Their union produces Oisín’s famous son, Oscar, and a daughter, Plor na mBan (“Flower of Women”). After what seems to him to be three years Oisín decides to return to Ireland, but 300 years have passed there. Niamh gives him her white horse, Embarr, and warns him not to dismount, because if his feet touch the ground those 300 years will catch up with him and he will become old and withered. Oisín returns home and finds the hill of Almu, Fionn’s home, abandoned and in disrepair. Later, while trying to help some men who were building a road in Gleann na Smól lift a stone out of the way onto a wagon, his girth breaks and he falls to the ground, becoming an old man just as Niamh had forewarned. The horse returns to Tir na nÓg. In some versions of the story, just before he dies Oisín is visited by Saint Patrick. Oisín tells the saint about what happened and dies. 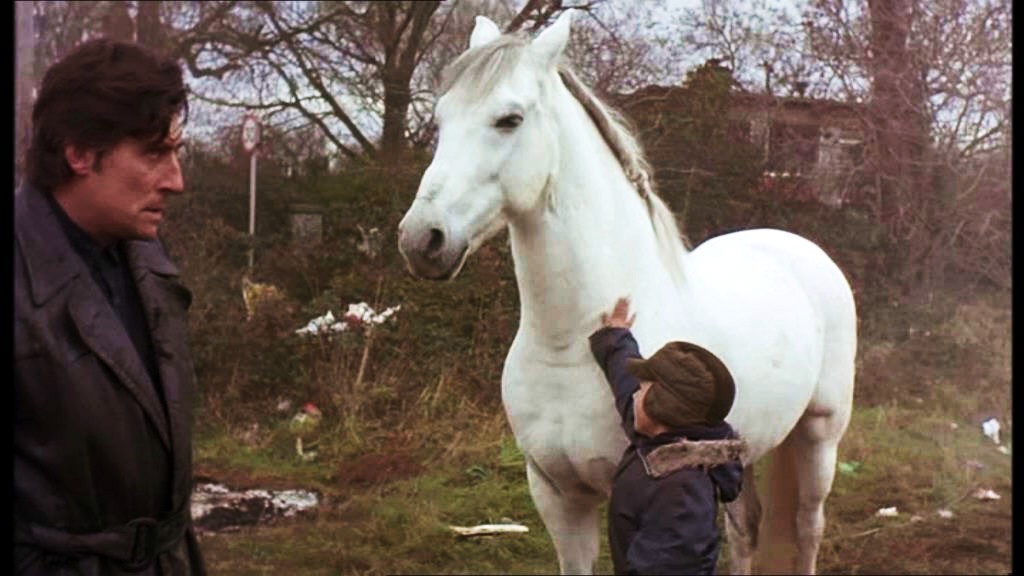 The Blue Sea and the White Horse

Laoi Oisín ar Thír na n-Óg’ [‘The lay of Oisín in the Land of Youth’] was published in 1896 and written by Miceál Coimín. It is a poem, written in an older version of the Irish language, about Oisín and Niamh, a fianna warrior and fairy princess from Irish Mythology.

The music, The Blue Sea/The White Horse, was composed by Patrick Doyle for the film Into The West (1992) and was sung by his sister Margaret Doyle. This video is an edited version of the original music.

II. THE DELIGHTS OF THE LAND OF YOUTH.

“Request refused by no true knight
Who knoweth aright the knightly vogue,
I make of thee now—’tis hence to speed
With me on my steed to Tir na n-Og!

Delightful land beyond all dreams !
Beyond what seems to thee most fair—
Rich fruits abound the bright year round
And flowers are found of hues most rare.

Unfailing there the honey and wine
And draughts divine of mead there be,
No ache nor ailing night or day—
Death or decay thou ne’er shalt see!

I make of thee now—’tis hence to speed
With me on my steed to Tir na n-Og!

Wikipedia page for Into The West

IMDB page for Into The West 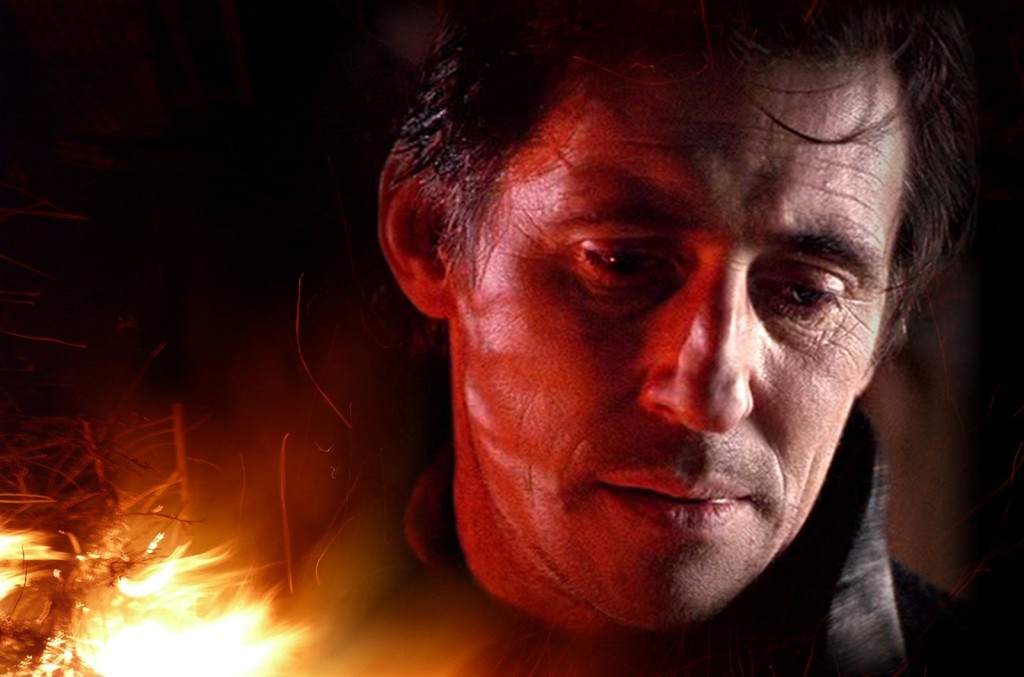 Many thanks to Daniela for the wonderful screencaps and to Aragarna for the video interview and the promotional stills!