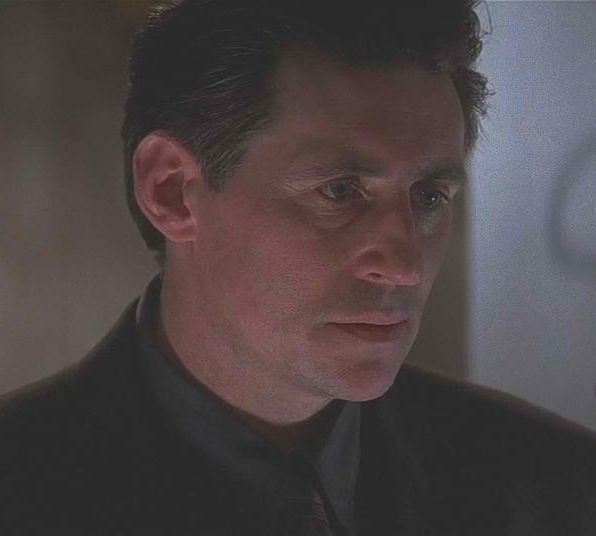 The Government gave her a choice. Death. Or life as an assassin. Now, there’s no turning back.

Director John Badham’s remake of French action thriller La Femme Nikita moves the action to the U.S., where Maggie (Bridget Fonda) is a strung-out Washington, D.C. drug addict who kills a policeman in a pharmaceutical-induced haze. Sentenced to death, Maggie is rescued by a shady operative, Bob (Gabriel Byrne), who offers to save her life if she’ll become a covert government assassin. Maggie agrees and trains for a life as a professional killer under a new name, Claudia. Her classes include weaponry, martial arts, explosives, and even social graces under the tutelage of Amanda (Anne Bancroft). Claudia is transformed into a classy sophisticate and is assigned to Venice, California, where she falls for J.P. (Dermot Mulroney), an attractive photographer who lives downstairs. Claudia’s highly dangerous job soon interferes when she’s ordered to carry out a series of clever assassinations, including a hit in a restaurant and a hotel bombing. When one particular killing goes horribly wrong, she gets some assistance from Victor the Cleaner (Harvey Keitel), a disposal artist who may have also been ordered to get rid of Claudia. ~ Karl Williams, Rovi 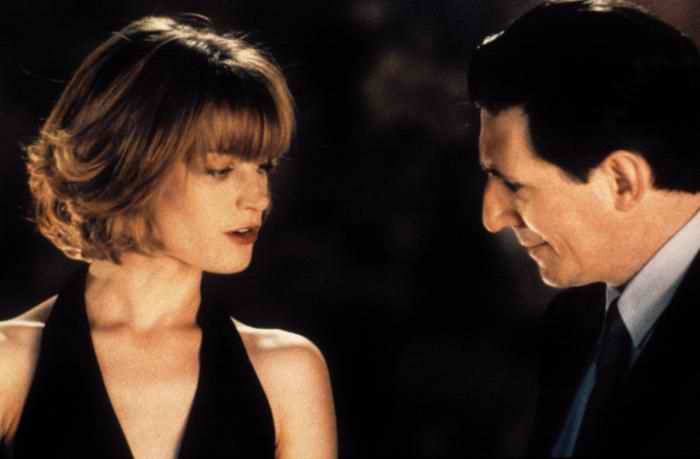 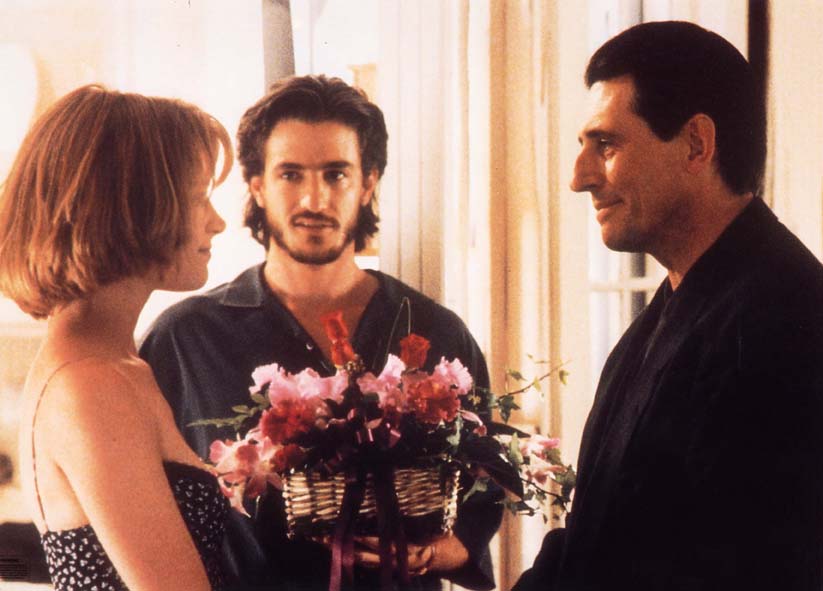 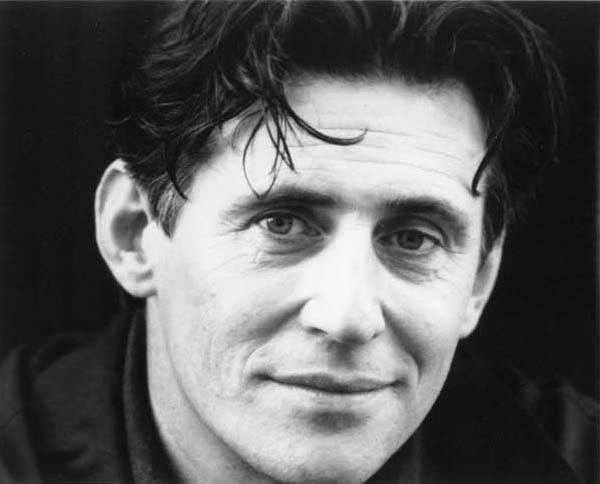 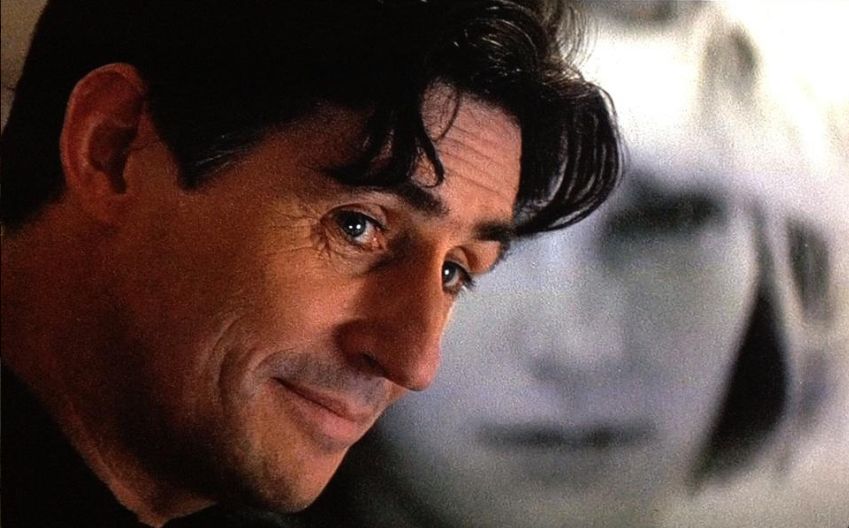 More promotional images for the film are in the Gallery.

Bob: Hi. I’m Bob. Is that Maggie short for Margaret?

Bob: You’re dead. At least that’s what everybody thinks. Your funeral…
Maggie: Did my mother come?
Bob: No, your mother, she um…

Bob: I work for some people. The government, let’s call them. We’ve decided to give you another chance.
Maggie: So, uh, you’re gonna give me this chance. What do I gotta do?
Bob: Learn, Maggie. Learn to speak properly. Learn to stand up straight for a start. Then languages, computers, and so on. Do something to help your country for a change.
Maggie: What if I’m not interested?
Bob: Row 48, Plot 12. 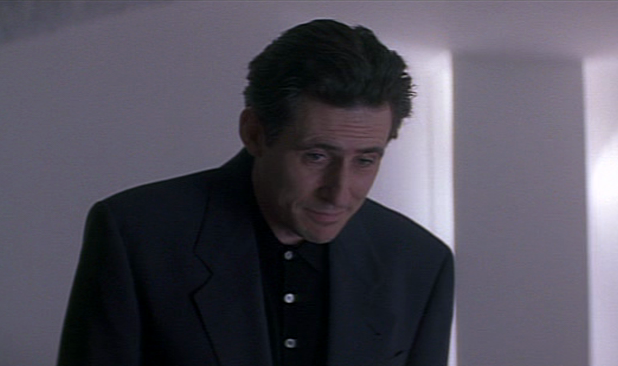 Bob: Rule #1: Never chamber the first round.
[Bang! He shoots her in the thigh]
Bob: That ought to slow you down for awhile, Maggie for Margaret.

Maggie: Can we make the dinosaur eat him?

Bob: This is Nina Simone?
Maggie: You got her for me, remember?
Bob: She wants sugar in her bowl?
Maggie: No, she’s saying, “Baby, just stick it in me twice a day and I’ll do anything for you. I’ll lick the ground you walk on.”

Bob: Look, Maggie. I know how you feel.
Maggie: Bullshit.
Bob: Yes, I do. I used to be a recruit myself. I used to be where you are now. And just like you, I hated every moment of it.
Maggie: So, you understand. I’m going stir crazy. Please. Just let me go out to the park.
Bob: I said I can’t. That’s it, okay?
[As he leaves her room, she screams after him]
Maggie: I wanna go for a walk!

Bob: Ask me why I’m so serious.
Maggie: Why are you so serious?
Bob: Because I’ve got serious stuff to tell you, Maggie for Margaret. First, the good stuff. Happy Birthday! Okay. Now the bad stuff. Kaufman has drawn a line in the sand. He says he’s not going to take any more crap from you. He mentioned the word “bullet,” and he mentioned the word “brain.” Happy Birthday.

Bob: Maggie, more than you can possibly know, I wish you every good thing. 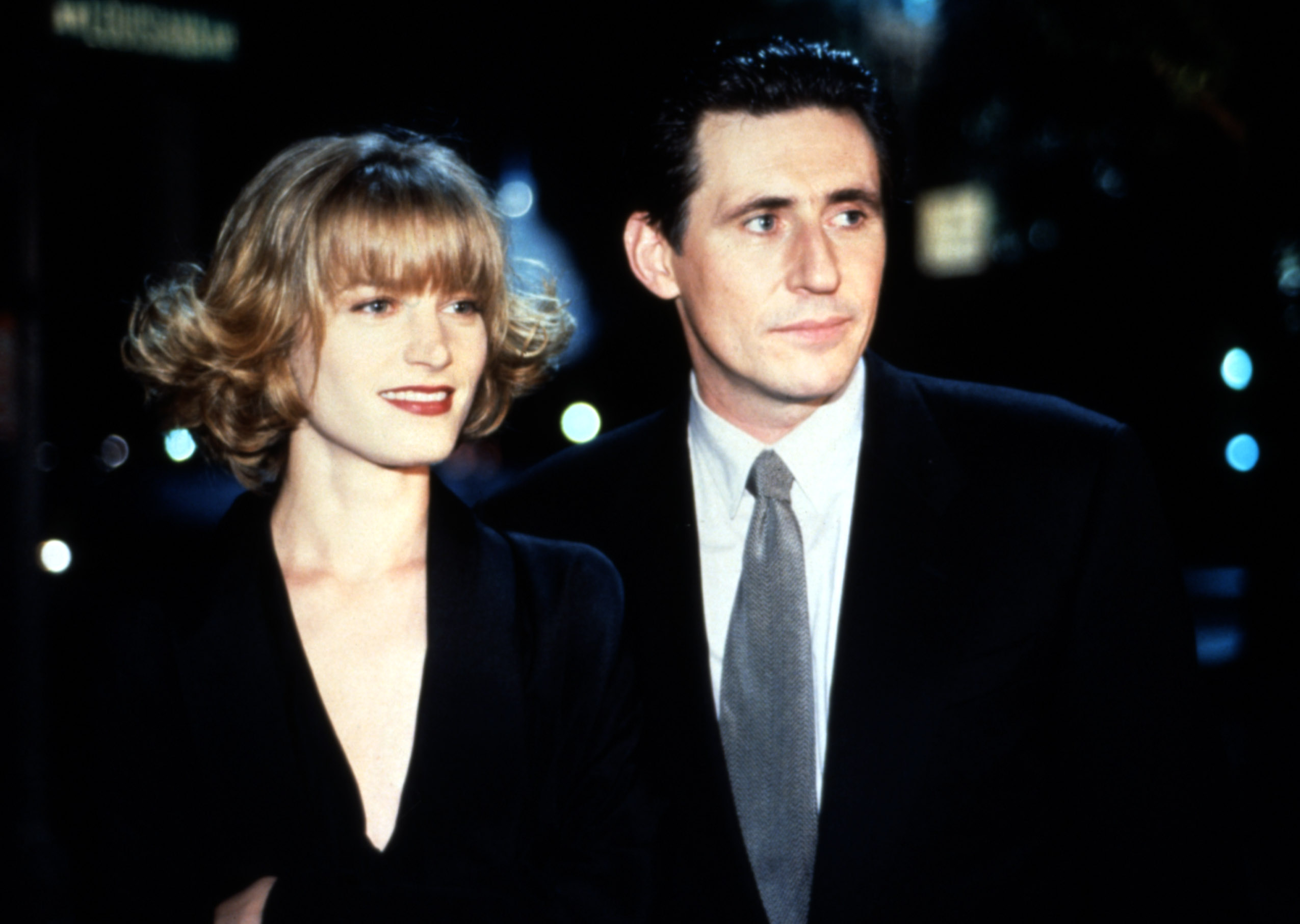 Bob: Your codename is Nina.
Maggie: As in Nina Simone?
Bob: Yeah.
Maggie: I’m scared.
Bob: You? That’ll be the day.

[Bob is waiting for Maggie as she returns from an ‘assignment’]
Bob: So, how are you?
Maggie: I just blew up a hotel. How the hell do you think I am? 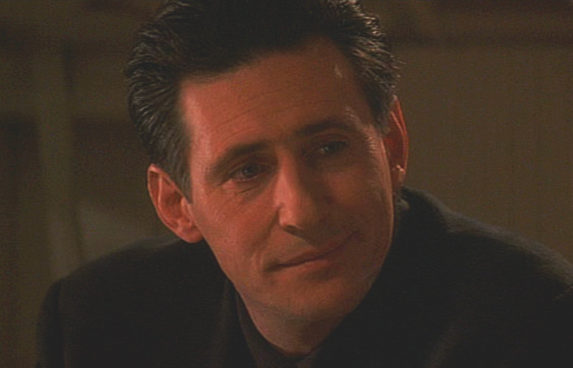 Bob: So, how was New Orleans?
[Maggie knocks the coffee cup from his hand]
Maggie: Everything you touch turns to shit.

Bob: You stupid ignorant little girl. You think you can just pout and decide that you don’t want to play anymore? I mean where do you think you are? Don’t you understand anything that I’ve said?
Maggie: I mean it.
Bob: You don’t know what you’re talking about.
Maggie: I’m through! I’m out!
Bob: Listen, which word don’t you understand? There is no out, there is no through. There is no out!

Maggie: Bob, you’ve got to help me. I can’t do this. I can’t live like this anymore. Don’t you like me well enough to help me?
Bob: Like you? [pause]
Maggie: I know that you like that you made me into something different, but you’re not looking close enough. I am different. Help me be better. Please, Bob. Let me go.

Maggie: If I do this job, if I bring this off, will you do what you can to help me get out?
Bob: No. 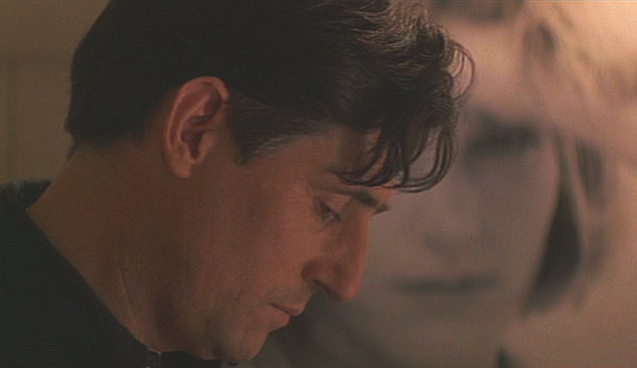 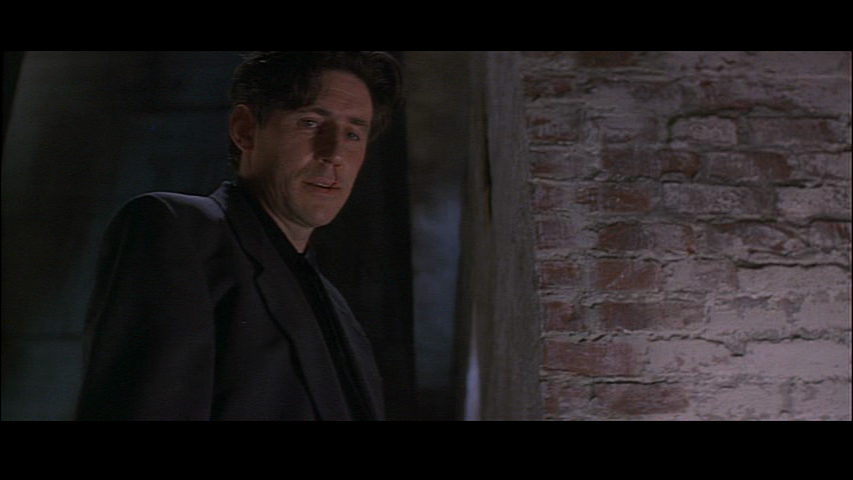 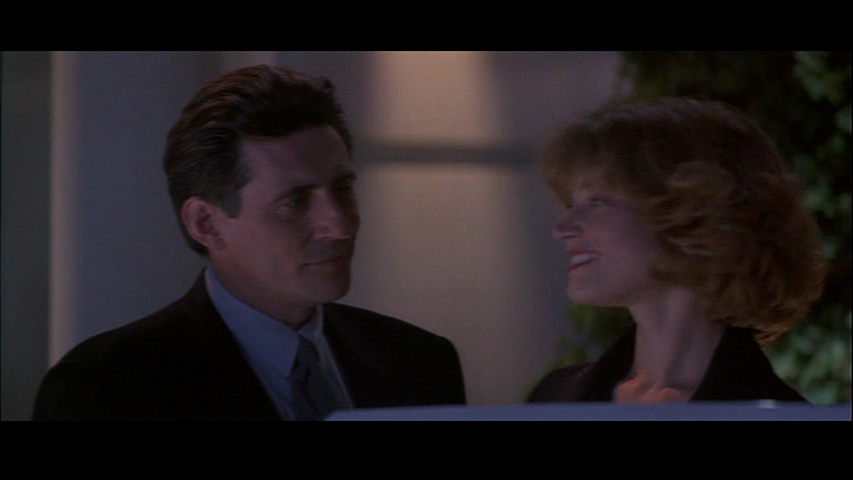 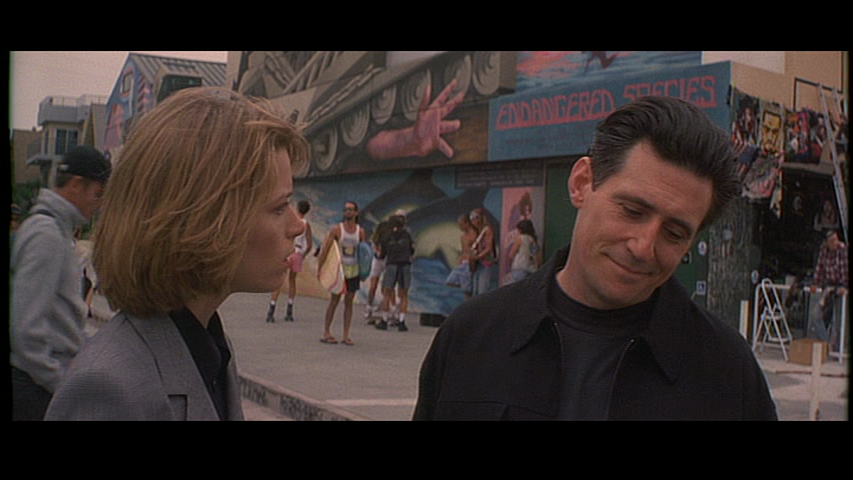 More screencaps by Stella are in the Gallery. Check out DeMonk’s screencaps, too.

As it happens, the best description of the relationship between Maggie and Bob, Maggie’s “handler,” comes from a blog about the original film:

The movie’s key emotional relationship is not between Nikita and the man she begins dating once she’s out on her own, but rather between her and Bob, her handler (Tcheky Karyo). They don’t have an affair, but he alone knows her real story, and he alone can judge just how deep a hole she has climbed out of. For her part, she knows that Bob had faith in her and staked everything on her at a time when no other person on earth would lift a finger for her–on the contrary, the system wanted her dead and gone. So from that angle, she owes everything to him.  They are like soldiers who have been through battle together. But Bob had faith in her candidacy for a distasteful job; so he’s also the connection to the thing that becomes her torture, the thing that threatens to keep her from what she finally can see and want. As Besson tells it, it makes for a compelling story.

The remake of the film follows this outline perfectly. 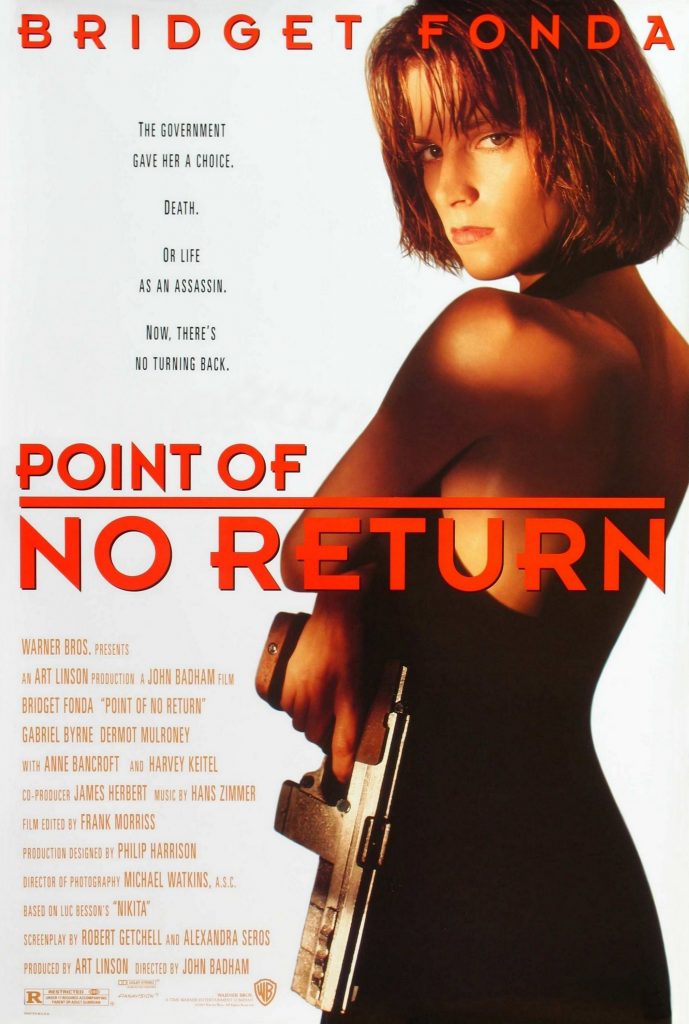 “Point of No Return” is a “Pygmalion” for our angry age. In both stories, an older teacher picks a girl out of the gutter and teaches her new skills. Professor Higgins taught Eliza to act like a lady, and now Bob teaches Maggie to be a lady and a cold-blooded assassin.

Both women get a lot of lessons on how to hold their forks.

EFilmCritic.com [This link is no longer available on the Internet]

Those who saw ‘La Femme Nikita,’ a French-Italian thriller released here in 1991, may have been impressed by how well it duplicated junky American thrillers. It had strong visuals, a pseudo-complex theme of individual freedom, and lots of people dying in bloody slow motion.

Point of No Return, the American remake of Nikita, is a duplication of a duplication: Hollywood, in its infinite wisdom, figures it can make better American pulp than the French can. As it turns out, Hollywood is right.

The first parts of both films are the strongest and the most alike: the opening violence, the woman’s defiance, her relationships with Bob and her Miss Manners mentor, and the climactic “graduation exercise” in which Nikita-Maggie, in a posh restaurant, pumps bullets into a man and his bodyguards.

It is in the restaurant sequence that some differences begin to emerge. John Badham directs with extra energy the fracas, makes it longer and deadlier than the French, and close to Westerns where the protagonist’s aim in unerring, while he/she remains unscathed. This adds to the disbelief, but also to the pleasure of gun battle fanciers.

The film score was composed by Hans Zimmer, with contributions by Nick Glennie-Smith.

Maggie/Claudia has a fascination for the singer/pianist/songwriter Nina Simone. Throughout the movie, various songs of Nina’s are used.

Together with the earlier re-release of “My Baby Just Cares for Me” in 1982, the movie helped bring Nina Simone back into the public limelight and made her better known with a younger audience.

“I Want a Little Sugar in My Bowl” lyrics: 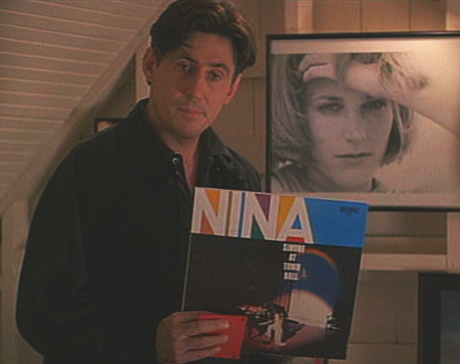 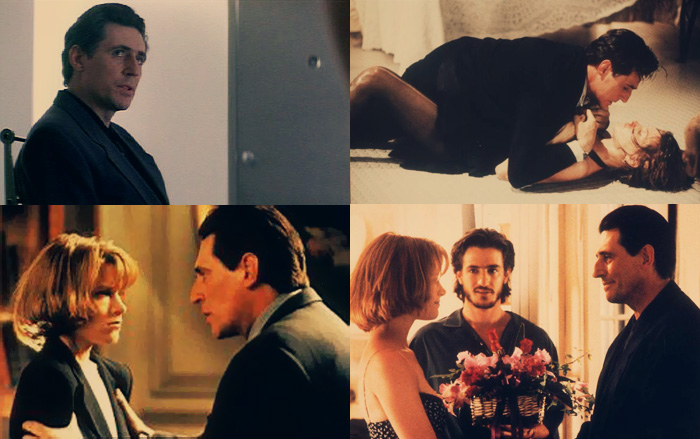 Gabriel Byrne Picspam: Point of No Return by Bowie28 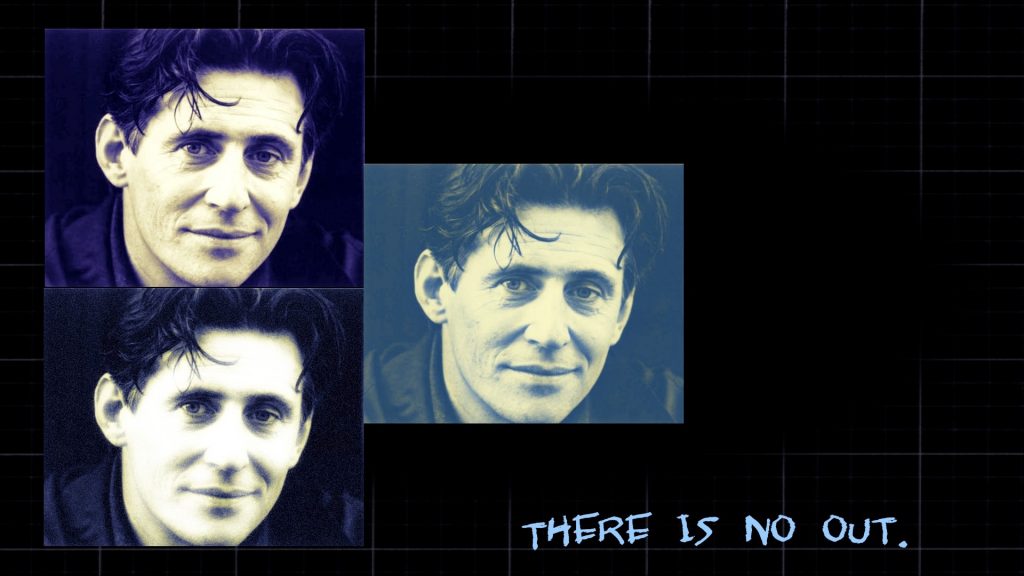 Point of No Return on Tumblr

Wikipedia page for Point of No Return

IMDB page for Point of No Return 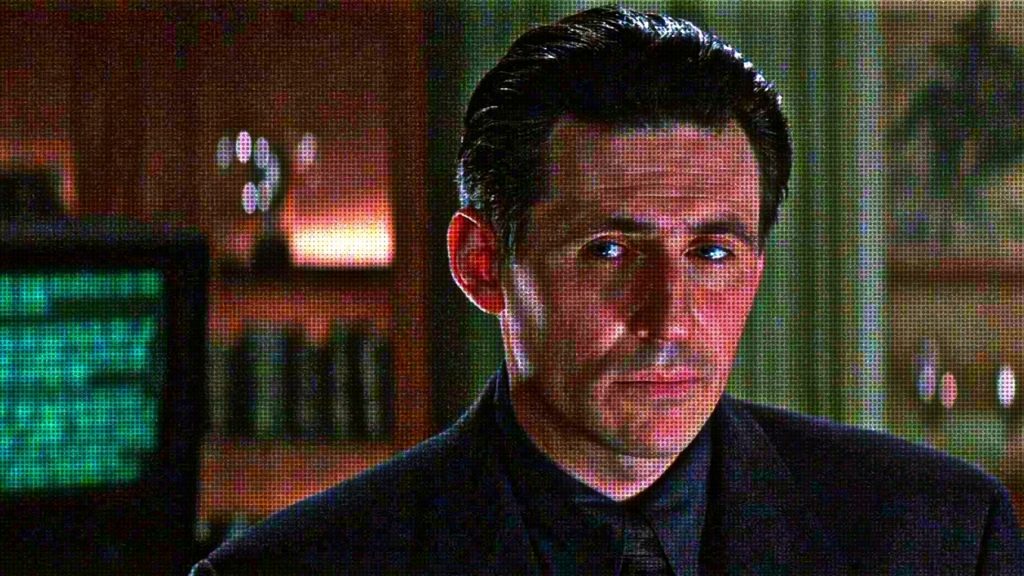 Many thanks to DeMonk for her screencaps!