Set in Romania during World War II, The Keep is a stylish horror film involving Nazis, a professor in a wheelchair, monstrous evil forces, and lots of fog and smoke. Jürgen Prochnow (Das Boot, Dune) and Gabriel Byrne (The Usual Suspects) are German officers who have commandeered an ancient fortress, unleashing Molasar, the creepy denizen of the castle’s keep. After losing several of their soldiers to Molasar’s unnatural appetite, they desperately enlist the only man who can help them: a Jewish professor (Ian McKellen), now an internee at Auschwitz, whose expertise includes haunted fortresses. ~ Ian McKellen’s website

The Dissolve: Departures: The Keep, by Scott Tobias [The Dissolve.com no longer exists on the Internet]

By the evidence here, the real battle between Good and Evil was waged between Mann’s dark, expansive, metaphorically rich fantasy and studio bosses who must have wanted something pulpier and scarier. Mann plainly lost the battle—Wilson’s complaint that it was “visually striking but otherwise incomprehensible” is as close as an opinion comes to a statement of fact—but The Keep is an authentic failure, not a generic one. The Tangerine Dream score may be the primary source of its cult status, but Mann’s achievement in creating his own dreamlike alternate reality alongside a historical one isn’t necessarily diminished by his failure to bring the story across. “The keep” has a presence: castle walls that stretch to infinity, an ancient Evil that forbids lodgers and requires rituals to contain it, the metaphorical heft of standing over a war of unimaginable atrocity. And thanks to Mann, The Keep has a presence, too.

It’s batshit bonkers and about as far as imaginable from the cool, slick-but-gritty restraint that became Mann’s signature, though the set design and some bravura camera moves certainly hint that there’s more going on in terms of visual style, than a mere journeyman would bring. And there are flashes of something better—some of the speeches given to the ‘good German’ (Jurgen Prochnow) or to the evil SS officer played by Gabriel Byrne, actually bring up unusual philosophical questions before we abruptly cut away to something daft. With a Tangerine Dream score on hand to remind us that though the film may be set in 1941, it was made in 1983, and that occasionally feels like an extended Kim Carnes intro, “The Keep” amounts to the one thing that Mann movies can never otherwise be accused of: camp.

The Keep is not a good movie. There are certainly worse choices you could make if you desperately HAD to rent a horror movie from the early eighties. What makes this movie a curiosity (in addition to the director and his wacky use of wind machines and strobe lights) is the cast. Jurgen Prochnow (of Das Boot and Beverly Hills Cop 2) is the nice Nazi sergeant. His plan seems to be to let his entire regiment slowly die before getting the hell out! This is interrupted by the MEAN Nazi who is played with manic glee by Gabriel Byrne! I was stunned to see him here, and it’s actually quite fun to see him doing his Colonel Klink impression and shooting people at will.

After his promising debut with The Thief, this is writer-director Michael Mann’s second feature [from a novel by F. Paul Wilson], testimony again to the one-step- forward, two-steps-back career theory.

It is all rather tasteless, and Mann makes big demands of his audience by expecting them to sympathize with members of the SS, while the Tangerine Dream soundtrack jars. Because of its these flaws, you’d happily dismiss it, and yet something in there haunts you. The shadows and fog create an effectively eerie environment for the tension to build, and it just about wins you over. Both stupid and impressive. 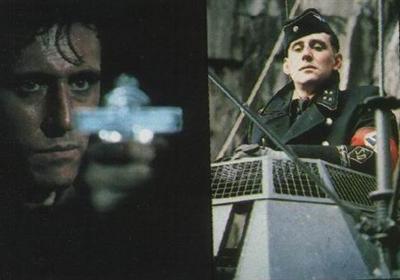 We filmed in North Wales, in the tiny village of Bettws-y-coed where tourists drop by for a five minute look at the pretty waterfall before driving off to clamber round Caernarvon or Conway castles. On my free daysin Bettwys, it always seemed to be raining and the hotel was damp and drear.

The locations were spectacular whether outdoors in the disused quarry where the facade of the Keep was surrounded by an East-European-style village – or underground in the disbanded slate mines.

Sets for The Keep

Fansite by Stéphane Piter, including interviews with the cast, excerpts from the script, and more

Thanks to Daniela for pictures and links.